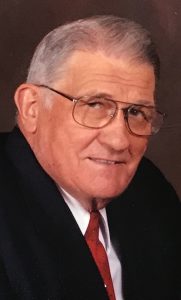 Funeral services for Mr. Davis will be today (Oct. 29) at 2 p.m. at Batesville Presbyterian Church. The family received friends Monday evening at the church. Burial will be at Magnolia Cemetery in with Rev. Jerry Long officiating.

Mr. Davis was born Oct. 12, 1932, to the late Thomas Jefferson Davis, Jr. and Lois Ozelle Hendrix Davis in Batesville, A lifelong Batesville resident, he was the owner of Davis Family Pharmacy, where he practiced and served the community since 1956, following graduation from the University of Mississippi pharmacy school.

Mr. Davis had worked for the pharmacy since the age of 12 and this is where he found his love for pharmacy at an early age. He was a member of the Mississippi State Pharmacy Association.

He was the recipient of the national pharmacy award Bowl of Hygeia for Mississippi. This award is given to one pharmacist in the state each year to recognize that person’s outstanding community service in their local community.

Mr. Davis was a member of Batesville Presbyterian Church where he served as a Deacon and Elder.

In his spare time, he raised black angus cows and also raised horses.