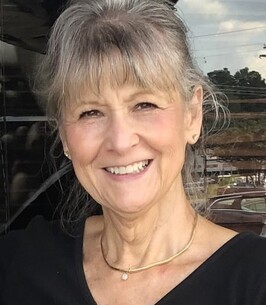 Born Feb. 25, 1952, in Parsons, TN, Kay called Parsons home until after graduation from Riverside High School in 1970. She attended Jackson State Community College, and later earned a degree in art and interior design from the University of Tennessee in Knoxville.

When she moved to Como, Kay owned the Como Courtyard while also helping to manage the Como Steakhouse and 211 Main event venue. For more than 20 years, she welcomed local and international guests to the Courtyard, many of whom became lifelong friends.

A friend and mentor to many in Como, Kay has left an indelible mark as a member of Holy Innocents Episcopal Church since 1997. Over the years, Kay has served on the mission committee, vestry and as a Junior Warden. For more than 20 years, she has served as a Licensed Euchartistic Minister in the church. Kay is remembered for many contributions to the Como community, especially her strong business sense and honest, sweet style that endeared her to many.

An announcement will be made soon for a Memorial Celebration of Kay’s Life to be held at Holy Innocents Episcopal Church in Como. Interment will immediately follow in the Holy Innocents columbarium. Another service will also be held later in Sugar Tree, TN

In lieu of flowers, memorials may be made to Holy Innocents Episcopal Church, 311 Main Street, Como, MS 38119. Ray-Nowell Funeral Home is honored to have charge of arrangements.