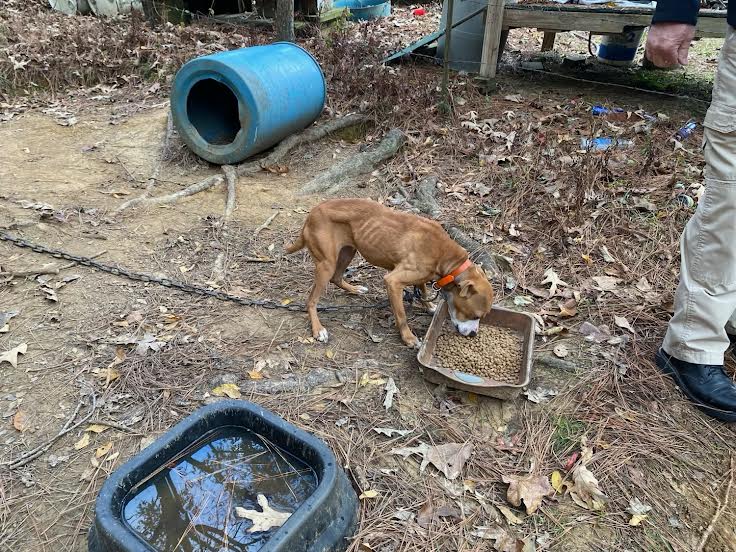 The discovery of chained and starving dogs at a residence on Mt. Olivet Rd. last week sparked another discussion among Panola County supervisors Monday about the need for an animal shelter in the county.

Supervisors listened to stories from deputies, Sheriff Shane Phelps, and volunteers from the Panola County Humane society that recounted the frustrations of those few citizens who are daily caring for unwanted animals, the majority being stray dogs.

Volunteers work through national programs to ready a portion of the animals for adoption in northern states, but the process is arduous and the lack of a shelter to keep animals during the approximate 60 day process means they often are kept at private residences.

When aggressive dogs are taken in, or those with severe medical problems, volunteers are left scrambling to find temporary housing. Such was the case last week when the Sheriff’s Office was called to a residence at 3572 Mt. Olivet Rd., where they found pit bulls chained without food or water.

“We found six dogs you could read a newspaper through and one dead in a doghouse,” said deputy Lt. Bobby Billingsley, who serves as the department’s animal control officer.

“This is what we are running into. Our dog problems are getting more prolific and it’s every single day, sometimes two and three times a day.”

Charged in the case was Daniel Beard, 48, who reportedly told officers he had missed only a few days watering and feeding the dogs. He was charged with seven counts of aggravated cruelty to animals, a misdemeanor on first offense.

A second offense within five years of a conviction is a felony. It was unclear Tuesday what penalty Beard may face if found guilty of the charges.

Billingsley said the cases of neglect and abuse are heartbreaking to law enforcement and rescue volunteers alike, but most people don’t consider the countless other animals that become homeless through normal life circumstances.

He told supervisors of cases that involved the death of pet owners leaving several animals with no care, or simply the surrender of animals by people who can longer afford to pay for food and medical care.

There have been multiple cases of persons arrested for other crimes and their absence created several uncared for animals.

All of the examples, Billingsley said, resulted in animals abandoned and law enforcement and volunteers left to make care arrangements.

“I’m keenly aware of the expense involved, but I also see this as a necessary thing,” he said. “Nobody ever said you could live in this country for free.”

The expense of building and maintaining an animal shelter has long been met with a coolness from supervisors, who understand that the undertaking is one with limitless expenses and fraught with management difficulties.

“To me it makes the most sense to grow the one that we have, split the financial burden that comes with it, and that way we are keeping everything in one area,” said supervisor Chad Weaver, referring to the existing shelter operated by the City of Batesville. “I hope we can work together instead of butting heads.”

That city’s shelter has 12 pens the city uses to put unruly animals picked up after police receive complaints. Owners of animals picked up by the animal control officer and put in the shelter must pay a fee at City Hall to have their pets released.

Aldermen this year approved funds for expansion of the shelter in this year’s fiscal budget, but have not settled on specific plans.

Sheriff Phelps suggested the county might do the same thing using an old airplane hanger that is disassembled and stored behind the jail. Phelps said the 900 square foot hanger could be used as a shelter if the county would commit to purchasing individual pens.

In previous discussions some have suggested that jail inmates could be used to clean pens and care for dogs, but supervisors have shied from that idea, concerned with the potential liability of inmates being bitten.

Supervisors seemed willing to take on some expense for future animal shelter operations, but asked Phelps to meet with the board of aldermen in Batesville to discuss a potential collaboration first.

The county currently owns no property the supervisors believe to be adequate for construction of a new shelter, and indicated a more prudent use of county funds would be participation with the city’s already-founded shelter.