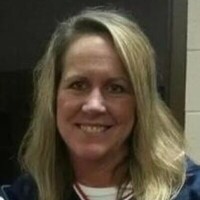 Rebecca Michelle Ryals Hawthorne,  50, passed away Saturday, Nov. 5, 2022, at the Regional One Medical Center in Memphis.

A celebration of Rebecca’s life will be held at 1 p.m. on Friday, Nov. 11,  in the Martin Willingham Memorial Chapel of Wells Funeral Home in Batesville. The family will receive friends beginning at 11 a.m.

Rebecca was born in Clarksdale on January 24, 1972 to her parents Sheila Warrington Ryals and Daniel (Danny) Bryan Ryals, Sr. both currently of Lambert.  She loved her position as secretary for Pope School where she was allowed to work with many employees who became friends and able to be apart of many children’s lives. She graduated Clarksdale High School in Clarksdale and attended Mississippi Delta Junior College in Moorhead.

She was married to Michael Hawthorne of Batesville for 27 years.  As a Mother she leaves behind her proudest accomplishments, her two children, son Trevor Kingsley Hawthorne of Oxford, and Madalyn Blaire Hawthorne of Batesville; an older brother, Daniel Bryan Ryals, Jr. (Leslie) of Cabot, AR and younger sister, Heidi Ryals Barbian (Larry) of Cleveland; nephew Dylan Barbian (Shelby) of Lambert; niece MeriRom Barbian of Oxford; nephews Jaiden Ryals and Austin Ryals both of Cabot, AR.

Rebecca was preceded in death by grandparents Doc and Johnnie Mae King, as well as, Richard and Helen Warrington.

Flowers can be sent to Rebecca’s service at Wells Funeral Home or feel free to make donations in lieu of Rebecca Ryals Hawthorne to your favorite charity.