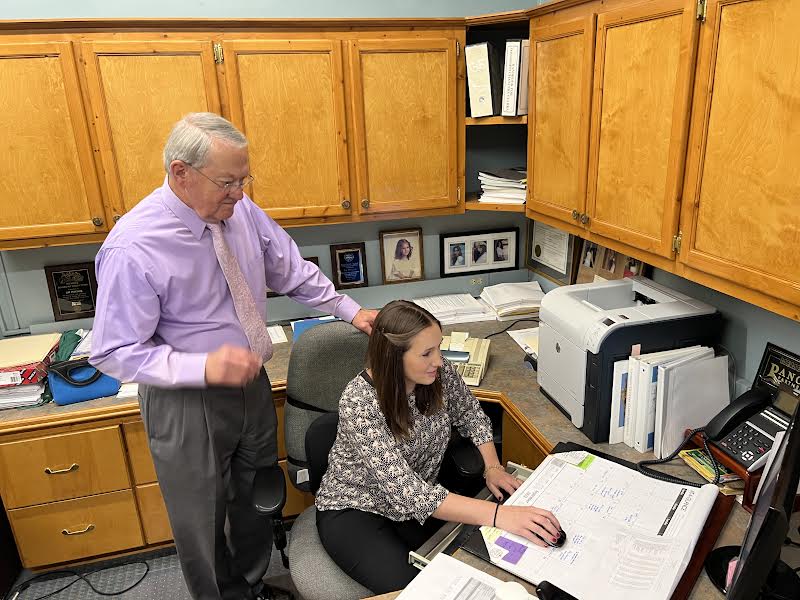 In 10 days Katie Ragon will become Chancery Clerk of Panola County, a position she knows is one of the most vital to the everyday operations of the county, and a challenge she is ready to embrace when the resignation of current clerk Jim Pitcock becomes effective at midnight on Sept. 30.

“I understand what an enormous undertaking the position is, and I feel very confident in my abilities and everything that Mr. Jim has taught me,” Ragon said this week. “I can’t thank him and the Board of Supervisors enough for the opportunity, and entrusting me with this office.”

Ragon was appointed to fill the remainder of Pitcock’s term by the supervisors last week when the four-term Chancery Clerk presented the board with a letter of resignation, and asked them to name her as his replacement.

Pitcock told the supervisors he had planned his retirement for some time, and had spent the last several months preparing Ragon to take his place.

“The office of Chancery Clerk is important for the people of Panola County to have complete trust and confidence, and I wanted to end my time knowing that this office will continue to fulfill that mission, and with Katie I know we will continue to be in good hands,” Pitcock said.

Pitcock announced his retirement after the date that would have required a special election for his replacement, saving taxpayers the costs of a county-wide election for one office.

Ragon confirmed that she intends to qualify in January, and be on the ballot next year when primary and general elections for all county offices will be held.

Pitcock said not only will he endorse Ragon for the office, he will actively campaign, attending rallies and speaking on her behalf.
“I believe just that much that she is the right person for this job, and for this county,” he said. “I will be more than happy to help her all I can.”

Ragon, who has worked in the Chancery Clerk’s office for more than three years, said she was humbled by her appointment and Pitcock’s fervent support.

“Mr. Jim is someone I strive to emulate,” she said. “He has a servant’s heart and is always there for his employees and the people of the county.”

Ragon, a native of Long Island, NY, has been a Batesville resident since 2014. She and husband Steven Ragon celebrated 13 years of marriage in February, and have two sons – Sawyer (2) and Finley (3 months).

The family attends Cornerstone Baptist Church and Katie is an active member of Junior Auxiliary of Batesville, the Exchange Club of Batesville, and Explorer’s Bible Study.

Ragon earned an associate’s degree in criminal justice from Carteret Community College in Morehead City, N.C., and worked as an intake officer for two years in the Youth Court in DeSoto County.

She worked two years in the Panola County Tax Assessor/Collector’s office under David Garner before transferring to the Chancery Clerk’s office. When Malia Brewer retired, Pitcock turned payroll duties over to her as well.

Among the many duties of the Chancery Clerk is serving as the clerk of the Board of Supervisors, attending every meeting and making a permanent record of all actions taken by supervisors, and publishing monthly expenditures by department for county and individual travel expenses incurred by the supervisors.

The Chancery Clerk also serves as the county treasurer and auditor, receipting and depositing all county funds in proper accounts. Additionally, the clerk disburses funds to pay all charges incurred by all county departments.

Chancery Clerks are responsible for the record-keeping of all probate, tax, and other matters heard in Chancery Court, including luncacy cases.

The clerk is responsible for filing, recording, and indexing all land record documents in the county, and collects all delinquent tax that has gone to a land sale.

All homestead exemptions are filed in the Chancery office, where tax rolls are maintained for local conservation and filing with the State of Mississippi.

The clerk is required to keep a journal of all fees and expenses of the office that is audited by the state annually. And funds collected that are above the amount allowed by state law are to be returned to the county treasury by April 15 of the following year.

To date, Pitcock has returned in excess of $1 million to the county in his 19 plus years in office, and this year alone returned $146,515 to local coffers.

“We have made many improvements to the office and I feel that my tenure as clerk has been very beneficial to Panola County,” he said.