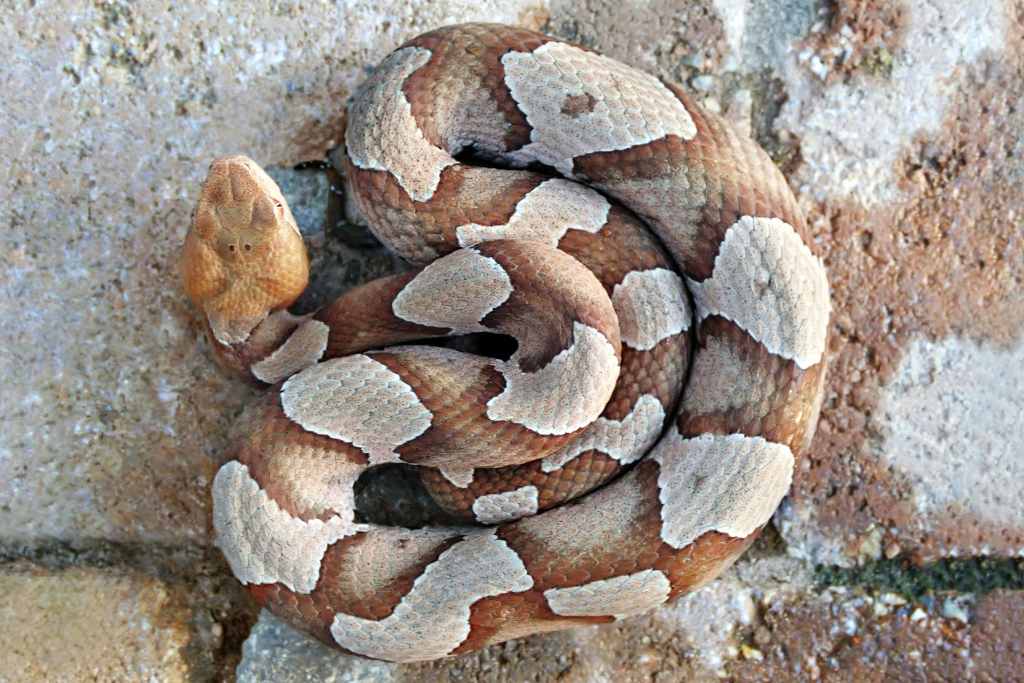 As hunting season is approaching, let’s take a closer look at the venomous snakes found in our great state.

Eastern Diamondback Rattlesnake: Medium brown or tan with dark diamond shaped markings. Each diamond is bordered by a single row of light-colored scales and the coloration generally fades from a darker to lighter hue towards the tail. There is a wide, dark strip bordered with lighter scales on each side of the head and there is a rattle on the tail. This snake is massive in build and averages 4 to 4.5 feet in length.

Canebrake Rattlesnake: Usually brown or pinkish gray with dark crossbands which often break into blotches on the forward body. The overall coloration grows darker toward the tail. A single dark stripe generally runs back from each eye and a narrow chestnut or rusty colored line runs down the center of the back. This snake averages from 3 to 4.5 feet in length and has a rattle on the tail. Its most distinguishing feature is the uniform, black tail sometimes referred to as the “velvet tail.”

Pigmy Rattlesnake: Usually gray to reddish in color, with dark brown or black blotches along the middle of the back and alternating spots which run down the sides. The smallest of our rattlesnakes, it averages just 18 to 20 inches in length. The pygmy rattlesnake generally has a rattle on its tail however, the rattle is often missing but will grow back with subsequent moltings. The most distinguishing feature is the large scales which are symmetrically arranged on the crown of the head.

Copperhead: Brown, pinkish-tan or chestnut colored with darker brown hourglass shaped crossbands. These distinctive crossbands are often incomplete or broken at mid body. A thin dark line runs back from the eye to the corner of the mouth. Juveniles generally have a yellow or greenish tail. Its body is thick and stout and is usually 2 to 4 feet in length. The copperhead’s soft colors blend in well with leaves on the forest floor.

Cottonmouth: The adult is usually yellowish brown to dark brown on the back with darker black, indistinct crossbands. A white face band may be present on some. Juvenile cottonmouths tend to resemble a copperhead and have bright yellow or even chartreuse tails. This is a very heavy-bodied snake usually averaging 2.5 to 4 feet in length. It is the only venomous water snake found in Mississippi and derives its name from the white inner mouth which is commonly exposed when the snake is threatened.

Coral Snake: Most easily identified by the bright color pattern of black, red, and yellow rings or color bands which encircle the body (the yellow and red rings are always touching, side by side). The head is small and black with tiny black eyes. It is a slender-bodied, cylindrical snake averaging 2 to 3 feet in length. Coral snakes are easily distinguished from harmless members of the kingsnake family which mimic a similar color pattern, however the two warning colors of yellow and red are never in contact on kingsnakes.