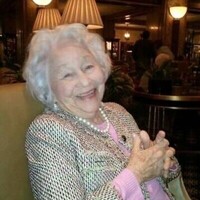 Ernestine Brittain Mahan Owen, age 99, passed away in the early morning hours of Sunday, July 3, 2022, at her home in Batesville.

Funeral services were Thursday, July 7, at the Batesville Church of Christ with the interment to follow at Forrest Memorial Park in Batesville.

Ernestine was born January 22, 1923 in Blytheville, AR to the late Arthur Monroe and Lenora Brand Brittain, dairy farmers in Burdette, Arkansas. She was the baby of the family and remembered always getting to have the cream off the top of the milk and the heart of every watermelon, which continued through adulthood.

She graduated from Burdette High School where she met both of her future husbands. She married Kelly Ruff Mahan in 1941 and they made their home on Gilchrest Farm in Blytheville, Arkansas. Kelly and Ernestine had their daughter Jackie during World War II, soon after they added Tommy and Priscilla to their family.

After Kelly’s passing in 1988, she was reacquainted with Harold Owen from Senatobia,  whom she had dated in high school. Ernestine and Harold were married in 1992 and enjoyed traveling together until his death in 2006.

She was a founding member of the Batesville Church of Christ and a Sunday School teacher for many years. She was active in the community serving as a Girl Scout leader and a proud member of the Republican party. She was a pilot and member of the Ninety Nines, a woman pilots group.

She was the first female to get a pilot’s license at the “new” airport over 60 years ago.

Mrs. Owen enjoyed riding her horse Pegasus and traveling, whether it was riding and looking at farmland, trips in the camper, or going to Europe. She always enjoyed working in her flower garden and writing poetry.

She was well known for being a gracious hostess and especially enjoyed hosting scrabble parties. One of her most memorable dinner parties was to welcome the Polish Minister of Religions and his wife who were traveling the United States with Mike and Molly Lipe Dawidow following Poland’s defeat of communism.

She was preceded in death by two husbands, the father of her children, Kelly Ruff Mahan and Harold Owen. Also, Ernestine was preceded by an infant daughter, Lenora Mahan, two grandsons, Bryan Smith and Paul Rinck IV, one brother, and three sisters.

Anyone wishing to make a memorial contribution, you may send those to Sardis Lake Christian Camp, 176 Four H Club Road, Batesville, MS 38606.