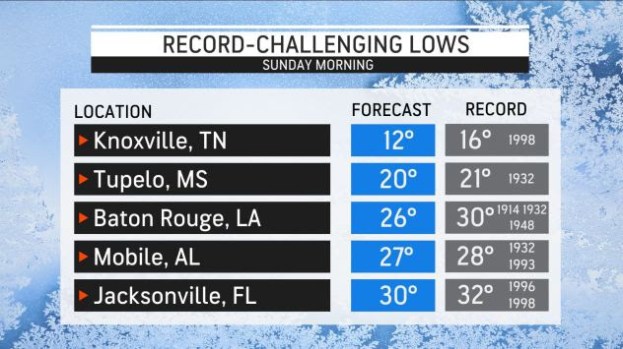 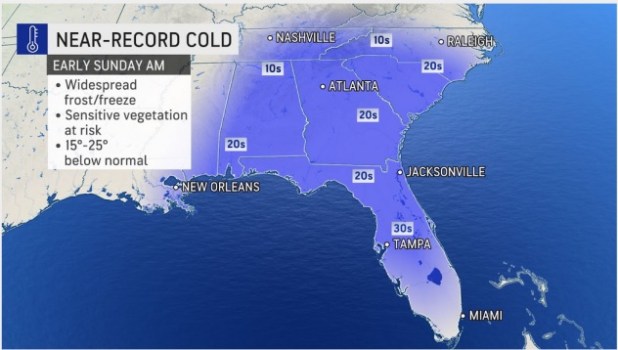 Late Friday night into Saturday morning, much of the Southeast will be impacted by severe weather that is forecast to roll through the area. After the threat of flooding, hail and even tornadoes recedes, cold air will quickly move in. Mexico, which, in addition to building warmth, is a key ingredient in fueling severe weather thunderstorms.

A blast of cold air has traveled across much of the United States through the second half of the week, breaking records from Washington State to Oklahoma. The cold air continued to move to the east, breaking daily record low temperatures in Oregon and Idaho.

Many locations in the Southeast will have temperatures below the normal low temperature on Saturday, including Atlanta, Nashville and Birmingham. This is due to an unusually strong dip in the jet stream which is allowing the late-season surge of cold air to dip so far south. The unusual jet stream setup will cause lower temperatures to dip even further on Saturday night into Sunday morning for the Southeast.

Several other cities are also forecast to break record low temperatures come Sunday morning, including Knoxville and Mobile, Alabama. Even areas in Florida will dip below freezing, including Jacksonville which is forecast to bottom out at 30 degrees.

These low temperatures in the Southeast could cause freezing and frost concerns. But the cold air won’t last long with temperatures expecting to be back to near-normal by Monday,. Some cities that experienced record cold on Sunday will quickly whiplash back into higher temperatures within 24 hours.

The cold snap could have damaging consequences in terms of some agriculture in the region. There is the potential for a damaging freeze where blossoming and bud break has occurred with fruit trees. In particular, peach trees in Georgia and South Carolina could be affected Saturday night with temperatures forecast to drop into the 20s.