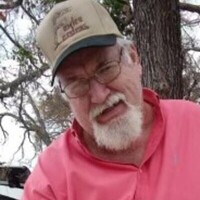 Services were held at Sneed-Carnley Funeral Chapel on Friday, Feb. 4.  Interment was at Senterfitt Cemetery in Lometa.

Roger was born on Jan. 22, 1950, in Panola County to Russell and Mary Freeman.  Roger was a natural-born cattleman, a talent that was first on display in his teens when Roger won scholarships as a high school rodeo champion.  Shying away from the spotlight, Roger became a cattle hauler and a mainstay in the cattle trucking industry.

Roger’s love of animals did not stop with cattle, he could be accused of liking four-legged animals more than the two-legged kind.  Although Roger was married a time or two, the true love of his life was his little dog, Emily.  He adored her and will now hold her forever, just as he wanted.

Roger had a wicked sense of humor and a smile that shined through his eyes.  Sensitive to his core, Roger was fiercely protective, independent and loyal to the bone.  Although he often claimed to be the black sheep of the family, he couldn’t possibly be.  Yes, he wore a black hat, but he was definitely no sheep.  Sheep are known to follow and Roger followed no one.  Determined to live life on his terms there could be no other way.  To Roger, this is what it meant to be free.  Although the world lost a fireball in a black hat, we know his spirit will forever be free.

Roger was preceded in death by his parents, Russell and Mary Freeman; brothers, Cletus and Harold Freeman; sisters, Clare Rowsey and Carol White.