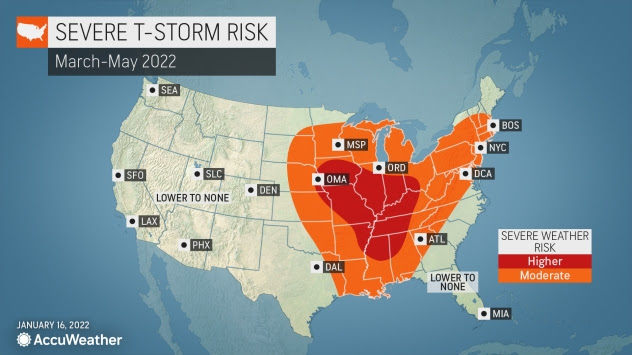 Punxsutawney Phil has emerged from his burrow and has declared six more weeks of winter, but that prognostication may not come to fruition across the entire U.S.

Winter weather has reached every corner of the country this season, ranging from waves of early-season storms across the entire West Coast to snow and ice in the Southeast and the first blizzard in years for part of New England. While there is still plenty of winter weather in the pipeline, the light is starting to appear at the end of the tunnel with the arrival of spring right around the corner.

Meteorological spring officially begins on Tuesday, March 1, and astronomical spring begins on Sunday, March 20, but the changing of the seasons may not translate to the abrupt end of cold and snowy weather across the United States.

One way that the team of forecasters forged the spring forecast is with the help of analogs. Analogs are years in the past when the weather patterns around the globe were similar to what is currently happening. Studying the past gives forecasters clues to what may unfold in the future.

These meteorological breadcrumbs have indicated that this spring could feature unusually late winter storms, both along the East Coast and West Coast, and even the development of an out-of-season tropical system.

Winter took its time settling in across the Midwest and Northeast with Chicago setting a new record for its latest-ever first measurable snow of the season. However, as the calendar flipped from December to January, so too did the weather pattern. January ushered in waves of snow as far south as Mississippi and the coldest air in three years across the Ohio Valley, including subzero temperatures in Cleveland and Pittsburgh for the first time since January of 2019.

AccuWeather long-range forecasters anticipate that this pattern will break by the start of meteorological spring, but that won’t spell the end of cold and snowy conditions just yet.

“There’s going to be some type of setback as we head into either late March or April,” Pastelok said, meaning that cold air will once again chill the regions, although not to the magnitude of the Arctic intrusions that unfolded in January.

The midspring cooldowns will bring the potential for frost and freezes about one or two weeks later than normal, potentially impacting when farmers and gardeners decide to plant for the season.

The extended spells of chilly air will not come alone. The return of colder air will open the door for snowstorms to deliver plowable snow over the Northeast.

Pastelok added that there could even be a snowstorm or two during April.

This has already been the snowiest winter in three years for the Washington, D.C., area with 12.3 inches accumulating in January alone. With more prospects of snow, the nation’s capital could finish with more snow than the 16.9 inches that accumulated in the winter of 2018-2019 and the 22.2 inches that fell during the winter of 2015-2016.

Snow has not fallen evenly across the Northeast throughout the winter. For instance, Philadelphia measured 12.1 inches in January, and just 50 miles away, Atlantic City, New Jersey, measured 33.2 inches in the same time frame, making it the snowiest January in Atlantic City history.

There could also be a higher-than-normal risk of ice jams and flooding, particularly across the Midwest, in February and March following extreme cold in January. “The up-and-down temperature forecast of melting and refreezing may go on in these areas, leading to block-ups and flooding,” Pastelok said.

As storm systems track across the Midwest and Northeast throughout the spring, some areas to the south will miss out on most of the precipitation, raising some short-term drought concerns.

Pockets of moderate drought have developed across the region and could expand in the coming months.

There is a wild card late in the spring that could erase the drought concerns in the Southeast: an early tropical system.

The Atlantic hurricane season does not officially start until June 1, but a storm could spin up before the season gets underway.

Pre-season tropical systems have not been out of the ordinary as of late, with a named storm developing in either April or May every year dating back to 2015. Some of these systems have impacted the U.S. mainland, including Tropical Storm Arthur, which brushed the Carolinas in May of 2020, and Tropical Storm Alberto, which made landfall along the Florida Panhandle in May of 2018.

The National Hurricane Center has started to look into moving the official start of the Atlantic hurricane season to earlier in the year following the recent trends, but as of early 2022 the dates have not been altered.

The regions where tropical development is most likely are “anywhere from the northeast Gulf, northern Florida Coast to Carolina Coast in May or early June,” Pastelok said. Any weather disturbances that move over these waters during the second half of spring could evolve into a named tropical system if the conditions are right.

A tropical storm that spins up close to the shores of the U.S., rather than far out over the Atlantic Ocean, is sometimes called a “home brew” system by meteorologists.

If a tropical system does manage to spin up in April or May, a landfall in the southeastern U.S. cannot be ruled out. A landfalling system could be potentially damaging, but heavy tropical downpours could also alleviate the pockets of drought across the Southeast.

Severe weather season will waste no time kicking into gear this year, although the worst of the storms and tornadoes may once again focus on areas outside of the traditional Tornado Alley.

“The early part of the severe weather season could get going quickly,” Pastelok warned, adding that the first severe weather outbreak could unfold as soon as late February.