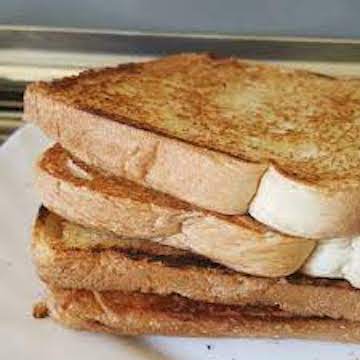 Today’s special is toast. If you have bread, even dried-out bread, you can make toast. This morning I toasted white bread with dots of margarine, in my small countertop oven.  But I had to figure it out after my old faithful toaster played out. I decided not to get another toaster, after thinking about it and knowing that the counter-top oven could do everything, which is why I bought it in the first place.

It took a minute and a few pieces of burnt toast, but now I can make perfect toast and the best part is that there’s not another kitchen appliance taking up space on the counter, or inconveniently kept in an upper cabinet.

Maybe my love for toast goes back to my childhood. My mom loved toast, especially “bacon toast”, which was a very crisp strip of bacon folded up in a nicely browned piece of white bread.  I ate many of these.

Once when she was in the hospital in her later years, she would ask every day if she could have toast instead of biscuits for breakfast, and they would say “of course you can,” but toast never came.  She was sweet and never complained about it, but would only eat the browned top of the gigantic biscuit that came instead.

Best toast I ever ate would be the toast momma would make for us when we were at the beach.  The kitchenette at our favorite place had a small gas oven with the bottom broiler.  Oh, the toast was divine… slightly toasted, perfectly browned with dobs of melted butter running together but yet the underside of the bread would be soft and warm. Such a different flavor compared to toast made in an electric oven.

My favorite is cheese toast, my breakfast specialty, and my boys ate plenty of these.  It makes such a simple breakfast…. just a nice slab of cheddar cheese (never Velveeta or American, no) melted on a slice of white or wheat…warm, gooey and satisfying.  I make cheese toasts for DW and me at least once a week, it’s extra good when made with Mississippi State cheddar cheese.

But not everyone knows about this fine, yet simple breakfast delicacy.  It was always my tradition to make cheese toasts for everybody who spent the night with me to go to the Canton Flea Market. Daughter-in-law Laura’s mom (who was from Kentucky, if that has anything to do with it) was just taken with my cheese toast and asked for the recipe.  She remembers her first cheese toast to this day.

Cinnamon toast is another option in my repertoire of toasts.  It’s simple, too, just bread, butter, and cinnamon-sugar.  But even better is Oregon Trail Cinnamon Raisin bread (the reason I go to Sam’s in Jackson) toasted with butter plus an extra sprinkle of cinnamon-sugar.   This one will mess up a toaster for the glaze will melt and run down into the bottom of the toaster, so it’s best toasted on a tray.

Toasted biscuits, too.  A left-over biscuit isn’t bad either when split, buttered and toasted for a dollop of jam or a dash of cinnamon sugar.  A cooked sausage patty is pretty good between a split toasted biscuit too. I love recycling…

Toasting changes the chemistry of bread by dehydrating it, giving it a different flavor. The absolute very best bread pudding I have eaten was made by hospital cooks in a small community hospital where I started out. White bread was toasted every morning (my mother would have loved it) in a big rotating counter top toaster.

As long as it was loaded, perfectly toasted bread kept coming and what wasn’t served to patients or from the employee cafeteria was frozen until there was enough to make 2 large steam table pans of their famous bread pudding.  There was no recipe, it was just butter, eggs, whole milk, sugar and vanilla whisked until smooth.  Then the mixture was heated and poured over the torn toast.

My favorite part was from the extra crispy corners, straight from the big oven and topped with a spoonful of homemade lemon sauce. So, if you want to take your bread pudding up a notch for the upcoming Mardi Gra season…toast the bread.  The difference is truly amazing.