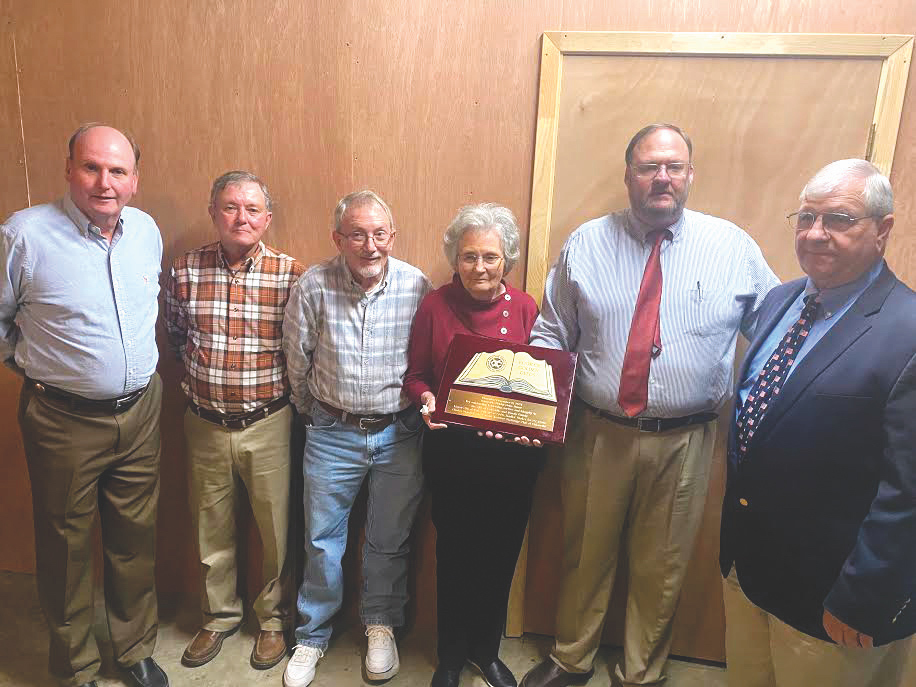 Former Batesville Mayor and businessman Bobby Baker was posthumously bestowed the Book of Golden Deeds Award at a dinner on Dec. 9. Nell Baker, with her children and their spouses, officially accepted the award for her late husband.

The Book of Golden Deeds Award recognizes dedicated volunteers who give endless hours of their time and talents toward making their communities better places to live.

Longtime Exchange member Jimmy Dickerson made the presentation, and shared stories about the late mayor’s participation in the local club.

“Mr. Bobby rarely missed a meeting, and he took notes about everything that went on, even when he wasn’t serving as secretary. Looking back on those those notes reminds us that he cared deeply about the causes the Exchange Club has supported over the years and the most important goal of preventing child abuse in our communities,” Dickerson said.

Reading from a page of Baker’s notes from a meeting in 2017, Dickerson drew laughter when he relayed that Baker had written, “The program was very good, and some questions were asked, but I couldn’t hear them.”

Dickerson reminded the Exchange members, their spouses, and the Baker family gathered for the program that remembering Baker for his good humor and quick wit was enjoyable, but the presentation of the Book of Golden Deeds Award was in recognition of his deep love and concern for Batesville, its citizens, and a better future for all residents of the city.

“Under his leadership our city became a better place for everyone, not just a few,” Dickerson said. “Mayor Baker had the ability to look into the future and make plans that not everyone understood at the time, but ended up being very wise and very beneficial to Batesville. There won’t ever be another one like him I think it’s safe to say.”

On the Wednesday before his death on the afternoon of Sunday, March 14, 2021, Baker attended the 7 a.m. meeting of the Exchange Club, cheerfully visiting with all members and enjoying discussions about the club’s upcoming Pancake Breakfast the next month.

“I will make pancakes or boxes to go out or whatever you need me to do,” the 89-year-old Baker said that day.

“He was a great man who loved his family and his friends,” she said at the dinner. “I thank the people of Batesville for their support during the thirty years he was mayor and the members of the Exchange Club for this honor. He would be proud of this award and our family is honored that he is being remembered in this way.”

In business, Baker bought and sold real estate for 57 years. He was a founding member of the Exchange Club of Batesville, a Paul Harris Fellow with the Batesville Rotary Club, a former Civilian Club member, past president of the Mississippi Municipality Association, and former president of the Northwest Realtor Board.

He enjoyed raising cattle on his family farm near Pope, and was a faithful member of First United Methodist Church,

During his tenure, Baker often referred to himself as “this little Mayor” and rarely said outright that he wanted specific things done by his fellow city officials. Rather, he would preface his request with, “I want you to think about something.”

Under his leadership, and with a strong unified coalition of supervisors, aldermen, Panola Partnership officers, and civic leaders, Baker helped bring Crown Cork & Seal, Batesville Casket Company, and many more industries to Batesville.

Photo:  Taking part in the dinner and presentation of the Book of Golden Deeds Award for the late Bobby Baker earlier this month were his sons and wife, and members of the Batesville Exchange Club. Pictured are (from left) Brad Baker, Gene Baker, Don Baker, Nell Baker, Batesville Exchange Club president Jeremy Weldon, and longtime Exchangite Jimmy Dickerson, who made the presentation to Mrs. Baker. (Rebecca Alexander)