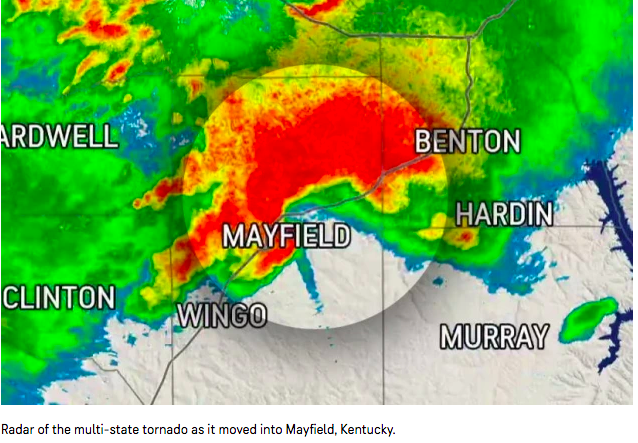 The deadly tornado outbreak of Dec. 10 spanned multiple states in the central and southern United States and left hundreds of miles of devastation. With tornado outbreaks of this caliber typically occurring between February and June, many are left to wonder how such a devastating outbreak could occur in December.

“We talk about these types of events with numerous tornadoes … several violent [tornadoes] with what appears to be violent EF4 or maybe EF5 tornadoes. Those typically occur in the springtime in the February through June time frame in most cases,” said Depodwin.

Severe weather can happen this time of year, but Depodwin says it’s typically confined to the Gulf Coast region.

“I think what really surprised me, and struck most of the weather community, about this outbreak yesterday was how far north they came and how violent the tornadoes were,” he said over the weekend.

A three-year average of 47 tornadoes has been reported in the United States during the month of December, according to the Storm Prediction Center. The multi-state outbreak is shaping up to be unusual, especially in how much farther north than usual it occurred. In addition, the number of fatalities that the outbreak may have caused is exceptionally rare, as the month of December rarely sees tornado fatalities at all.

The unusual warmth in the north that preceded the outbreak was one of the main ingredients that drove it to occur. It’s typically not so warm this time of year for that region, so outbreaks are usually unable to form.

“I think the warm December certainly played a role. We haven’t had a lot of cold fronts make their way all the way down into the Gulf of Mexico yet so that can sometimes help cool off the sea surface temperatures,” said Depodwin.

The Gulf of Mexico being at or above normal this time of year can further aid in the transport of warmer air northward, which is what helped fuel the multi-state outbreak on Friday night.

As the warmer air from the Gulf moved north, a very strong low pressure area was moving out of the Rockies and into the Great Lakes region. This pulled the warm and moist air even farther northward.

Depodwin said the four main ingredients needed for severe weather were prevalent to ignite the outbreak.

All four ingredients have to come together perfectly to trigger a strong outbreak, as they did on Friday.

“This sort of reminded me of a March or April type setup, certainly something we don’t see often at all,” he said, adding that it’s even more unusual to see this type of setup in December due to a lack of warm air.

A storm that will shift east out of the Rockies this week will draw warm air northward ahead of it. The system will produce damaging winds along its path across the central U.S., and AccuWeather forecasters are monitoring for the potential for gusty showers and thunderstorms, but also the possibility that some thunderstorms may turn severe.

“If you live in any parts of the middle of the country or the Mississippi Valley, in the next week or so, we have to keep an eye on one or two chances for severe weather. And then, as we head more into January, we typically see a lull in the severe weather before it ramps back up,” said Depodwin.

As for the possibility for another outbreak like last Friday night, Depodwin says it’s unlikely.

“There can certainly be more tornadoes this month, though,” he said.