Severe weather threat could include tornadoes for parts of South, Midwest 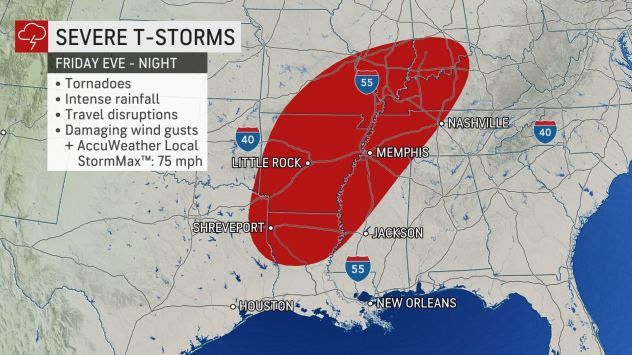 Friday may start with a few showers or even a rumble of thunder in metropolitan areas around cities such as Memphis, Tennessee, Little Rock, Arkansas, and Monroe, Louisiana. Following any turbulent weather in the morning hours, there will likely be a period of time during the early afternoon when the rain subsides.

However, this brief lull will give the atmosphere an opportunity to gather energy as unseasonably warm and humid air will move northward from the Gulf of Mexico. These ingredients combined with a cold front approaching from the west will lead to explosive thunderstorm development.

“A swath of showers and storms will develop and trail across the Ohio and Tennessee valleys and into portions of the Southeast, sparking strong to severe thunderstorms from Friday evening through the overnight hours,” said AccuWeather Meteorologist Alyssa Smithmyer.

Some of these same locations just dealt with severe weather late this past weekend and earlier this week.

Even though some thunderstorms may fire up through the morning, any storms early in the day are not expected to be severe. With the early sunset during this time of the year, it will likely be after dark before the strong to severe thunderstorms develop.

As storms develop, they will produce a tornado risk across multiple states. Some of the locations where the risk for tornadoes will be the highest include Evansville, Indiana, Bowling Green and Paducah, Kentucky, Memphis and Nashville, Tennessee, and Greenville, Mississippi.

The National Weather Service’s Storm Prediction Center (SPC) has issued an enhanced risk for parts of the Midwest and South. More than 6 million people currently live in the area covered by the enhanced risk area, and more than 9.5 million reside in the area under a slight risk.

The three-year average from 2018 to 2021 for tornadoes in December across the U.S. is 47, according to the SPC. Some Decembers are more active in terms of tornadoes compared to others. In 2018, there were 66 tornadoes reported, compared to just 18 in 2020.

Potential severe weather is always a concern, particularly at night since most people are sleeping. AccuWeather forecasters caution people in the threat zone to have a way to receive timely weather alerts if a severe thunderstorm or tornado warning is issued for their location.

With Christmas just around the corner, many people have set up outdoor holiday decorations. These decorations can add to the debris that a potential tornado may be able to gather.

Even without any twisters, strong winds and heavy rain will present concerns. Some of the winds may be damaging as gusts may reach an AccuWeather Local StormMax™of 75 mph in spots.

Storms should move quickly enough to limit flooding concerns, but some areas may be on the receiving end of multiple lines of thunderstorms, which would raise the risk of flash flooding.

Thunderstorms will continue to move eastward on Saturday. The risk for severe weather will be lower than on Friday, but cities as far north as Philadelphia, Baltimore and Washington, D.C., may be at risk for strong thunderstorms to begin the weekend.