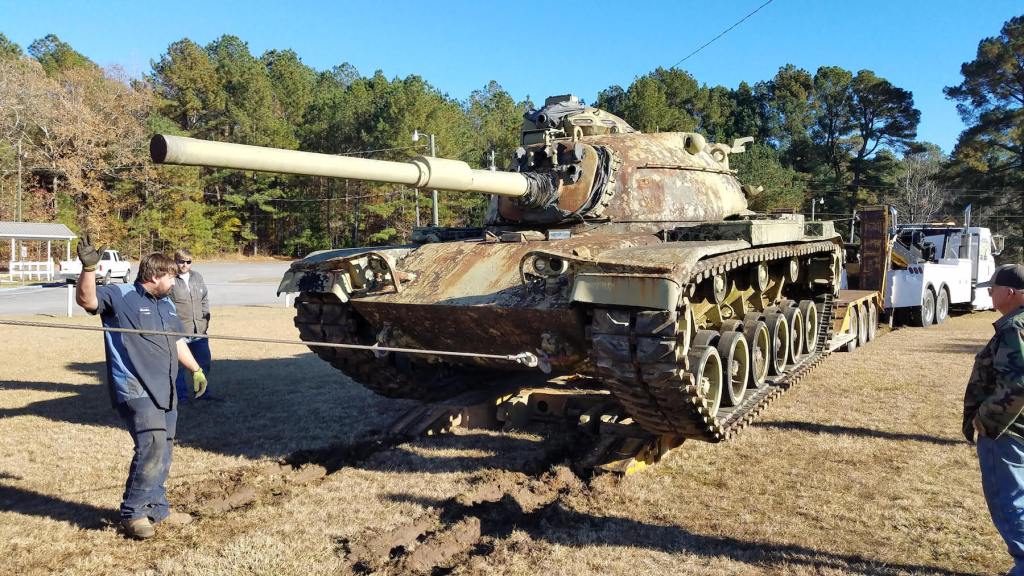 The military tank that has been a part of Batesville’s landscape for the past 35 years has a new home in Water Valley.  A wrecker loaded the tank onto a heavy equipment trailer for the short trip to the V.F.W. Post 4100 on Hwy. 315 in Yalobusha County Tuesday.

V.F.W. Panola Memorial Post 4968 has been home to the heavy tank, which was used in action in the Korean War, since 1986.

Local post Quartermaster Calvin Land said the tank was originally destined for a post in another town, but when National Guard officials found out the prep work had not been completed, they looked for the next post that had requested heavy artillery pieces.

“Sam Dodd was our post commander back then and he hurried out and got a pad built in front of the V.F.W. and they brought the tank here,” Land said. “We are glad that another post is getting the tank and the Water Valley boys will take good care of it.”

Land said both the Town of Sardis and City of Oxford expressed interest in the tank, as did the local National Guard unit, but the veterans of the Water Valley post were the fastest. “They really wanted it, and said they would pay to have it moved.” Land said.

Some thought the tank would be moved to the lawn of the Mississippi State Veterans Home in Lafayette County, but Land said the local post didn’t hear back from that group after an initial phone call.

Land and other local V.F.W. members knew the tank would need to be relocated when the decision was made to sell the building, which was built in the late 1940s. It was once a thriving post with many active members. Dances, socials, and other events were routinely held at the location.

Jonathan Garner purchased the property and has already begun upgrades to the landscape and building.

In recent years the active membership of Post 4968 has declined, but Commander Morris Wagner still leads monthly meetings of the small group. Land and others are adamant the public knows the V.F.W. property has been sold, but the post will remain active. Meetings will be held at local restaurants or other venues.

This week’s move of the tank to Water Valley was overseen by Yalobusha-based wrecker owner George Crocker, and reportedly costs more than $6,000. Post 4100 in Water Valley plans to begin a restoration project on the tank next year as funds allow.

Moving the massive tank was a major undertaking, and upon completion Crocker was heard to say he will move anything, “but I ain’t moving another tank.”