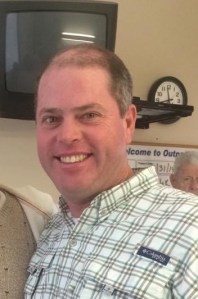 Dale Adams, age 53, passed away Friday, November 19, 2021 after a long and courageous battle with cancer.
Funeral services were 2:00 p.m. on Sunday, November 21, 2021 in the Martin Willingham Memorial Chapel of Wells Funeral Home. The interment followed at Forrest Memorial Park.
Dale was born in Greenwood, MS on May 17, 1968. He graduated from Delta Academy in Marks and went on to obtain his degree from Delta State University in Cleveland. Dale worked as a conservation officer for MS Department of Wildlife, Fisheries, and Parks for 33 years. He was awarded District 2 Officer of the Year in 2004. In his later years, Dale was promoted to Supervisor for his District and Lieutenant.
Dale was an avid outdoorsman. He was strong in his faith in God. Family was the most important aspect of Dale’s life. His only grandchild, Caroline, was his entire world. He was an extremely proud Poppie. Dale was a member of Holcomb Baptist Church and proudly served his country in the Army National Guard.
Dale was preceded in death by his parents, James and Rita Ann Inmon; aunt and uncle, Patricia and Reubin Hawkins, and an uncle, Kerry Hawkins.
His loving family who will miss him most of all includes his wife, Tina Bryant Adams of Courtland; his children, Hannah English (Hunter) of Pope, and Zack Adams (fiancé Ashlyn) of Courtland; two sisters, Tracey Adams Durham (David) of Batesville, and Linda Inmon of Senatobia; one brother Don Inmon of Memphis, TN.; uncle, James D. Hawkins of California; aunt, Cindy Brewer (Rickey) of Strayhorn; one precious granddaughter, Caroline James English, and a host of nieces and nephews.
Memorials in Dale’s honor may be made to Hope Cancer Retreat, 26904 Brentwood Rd., Splendora, TX. 77372. www.hopecancerretreat.com