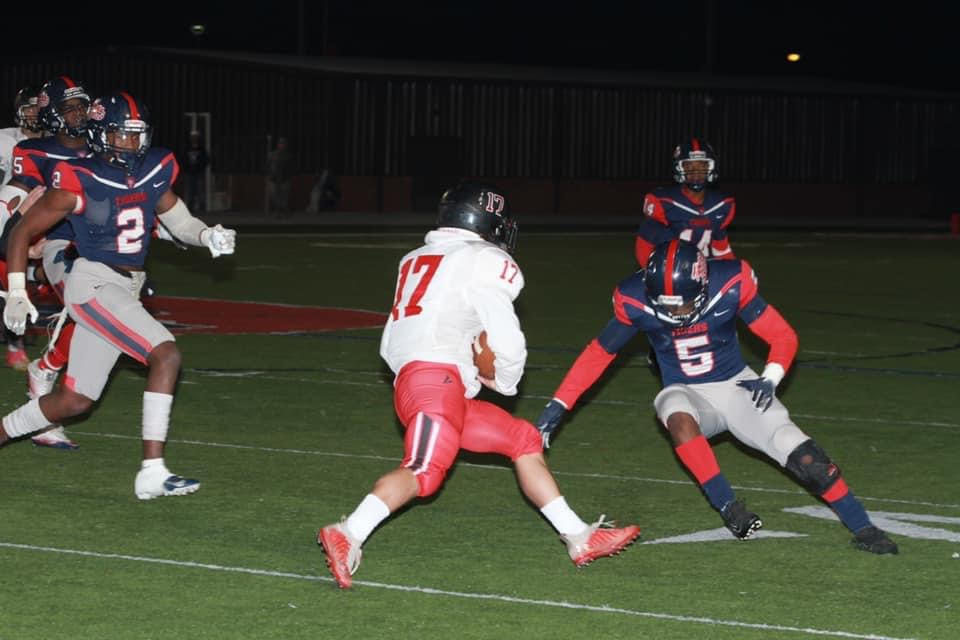 The old cliché of throwing records out the window will prove true when Oxford High School makes the short trip to Batesville to tangle with the South Panola Tigers Friday in the opening round of the North 6A State playoffs at 7 p.m.

Both teams were scheduled to play Sept. 3,  but COVID issues among the South Panola team forced the cancellation of the game. The Tigers enter the game sporting a 8-3 record while Oxford stands at a deceiving  7-4 on the year.

South Panola wrapped up the Region 1 championship with a 42-9 win over Center Hill last week while the Chargers fell 48-7 to Madison Central.

If there was a “dangerous” fourth seeded team heading into the postseason, it would no doubt be Oxford.

The Chargers, led by sixth-year head coach Chris Cutcliffe, started off the season off 2-2 with losses to Ruston,La 28-14 and 34-23 to county rival Lafayette Co., but pulled off its biggest win of the season by ending Starkville’s 44-game home winning streak 42-35.

On the offensive side of the ball, Oxford is averaging 255 yards per game with 144 yards coming on the ground and 110 through the air. Directing the Charger offense is senior quarterback Michael Harvey who has thrown for 856 yards and six touchdowns on the year.

Harvey has plenty of weapons at his disposal including wide receivers Cashe Shows and six-foot-three sophomore Jack Harper. The 6-1, 175-pound junior Shows leads the receiver corps with 15 catches for 230 yards.

Junior running back Roman Gregory leads Oxford with 751 yards rushing and 12 touchdowns. Others in the backfield include Omar Howell (105-401) and Tracy Harris (57-247 4TD’s). Demonte Mitchell anchors the Charger defense with 84 tackles. Alex Sanford (76 tackles) and Keegan Wilfawn (56 tackles) are tied with 16 tackles-for-loss.

Oxford could have its hands full with a young, but stingy, South Panola defense that has held the last four opponents to under 200 yards of offense. Leading the Tigers are sophomore linebacker Julius ‘JuJu’ Pope with a team leading 51 tackles and four quarterback sacks. Other starters in linebackers Mo’Trell Chapman and Landis McKinney.

Quarterback David Hubbard was 10-of-15 passing for 115 yards and three touchdowns as the Tigers led 14-3 after one quarter and 28-9 at halftime. Hubbard also rushed six times for 50 as part of South Panola’s 234 yards rushing on the night.

John Blockmon and Seandun Clark were on the receiving end of Hubbard’s touchdown strikes. Demarion Shaw added a five-yard scoring run in the fourth quarter.

After Clark returned the opening kickoff the Center Hill 35, South Panola took advantage of the short field position as Hubbard hit a wide-open Clark from five outs out on fourth down to give the Tigers a 7-0 lead.

The Mustangs and their  rarely seen triple option offense responded with a nine-play, 67-yard drive that ended in a 25-yard field goal at the 4:24 mark of the first quarter.

South Panola answered with a 10-play, 47-yard drive that resulted in a one yard plunge by Pope followed by Conner West PAT to make the score 14-3 with 1:42 remaining in the first quarter. The drive was aided on a 13-yard run by Hubbard on  3rd-and 4 at the Mustang 41.

Center Hill showed its resilience on the first play of the second quarter  on a 24-yard touchdown run that close the margin to 14-9.

South Panola yet again punched back with a quick, three-play scoring drive resulting in a spinning 23-yard run by Pope into the end zone to extend the lead to 21-9 after West’s successful point after.

The Tigers closed out the half as Hubbard connected with John Blockmon on a 12-yard pass with 23 seconds remaining.

Things began to unravel for Center Hill in the third quarter as a unsuccessful hook-and-lateral play resulted in a fumble return by Mykel Allen to the Mustang 14-yard line where Hubbard tossed a touchdown pass to Pope on the next play for a 35-9. cushion.

Demarion Shaw accounted for the final South Panola touchdown with a five-yard plunge with 7:24 left in the third quarter.

“I feel like the kids came out with a little bit of a chip on their shoulder after losing to Horn Lake last week. We had a short week to get ready, but they came out, got prepared, and played really well tonight. Next week starts a new season with Oxford and I’m sure we will be ready to play,” said head coach Ricky Woods.

The Tigers amassed 358 total yard of offense with 243 coming on the ground and 115 through the air. South Panola moved the first down chains 21 times compared to 12 by Center Hill. Both teams were penalized five times.

D’Mariun Perteet led South Panola with 62 yards on eight carries while Shaw added 51 yards on also eight carries. Pope carried the ball six times for 42 yards and caught one pass for 14 while returning two kickoffs for 75 yards including a 44 yarder that set up a score.

Terrion Hughes supplied three carries for 56 yards in a reserve roll. Clark caught four passes for 56 yards while LaAric Harris and Ethan Johnson had one reception each. Trey Drumheller had two catches for 17 yards.