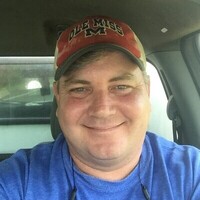 Ryan Austin, 43, passed away at his home on Thursday, Oct. 21, 2021. Ryan was the husband of Keisha Austin of Courtland.

The family will receive friends Saturday evening from 5 to 8 p.m. at Wells Funeral Home. Services will be held at 2  p.m. on Sunday, Oct. 24, in the Martin Willingham Memorial Chapel of Wells Funeral Home. Interment will follow at Shiloh Cemetery in Courtland.

Christopher Ryan Austin was born May 29, 1978, in Clarksdale to Tommy and Bonita Brower Austin in Clarksdale. Ryan worked for The Southern Company as a technician. He was a member of Shiloh United Methodist Church.

Ryan enjoyed being outdoors hunting and fishing. He enjoyed playing a good round of golf and was an avid Ole Miss fan. Most of all, Ryan cherished spending time with his children.

Ryan was preceded in death by one brother, Stephen Cody Austin.