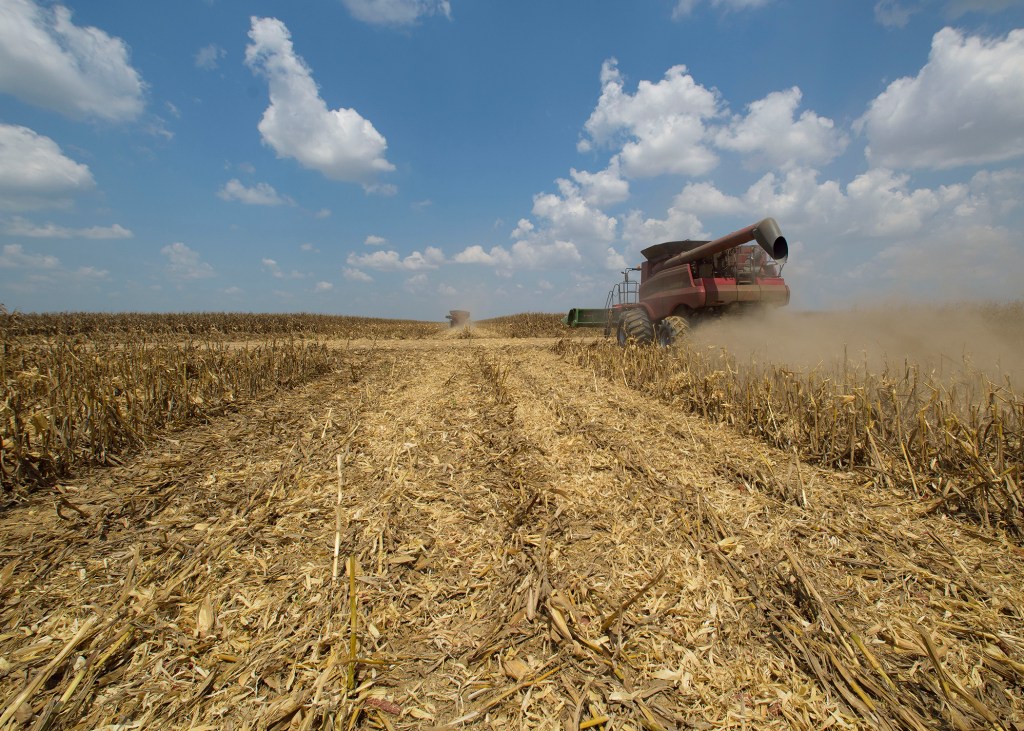 CROPS -- Annual crops such as this corn being harvested store carbon in their roots. Good record keeping and management may make this carbon content available for sale as carbon offsets. (Photo by MSU Extension Service/Kevin Hudson) Alt text -- A red combine harvests dried corn in a dusty field.

Mississippians are exploring the relatively new and growing carbon offset market, although many issues related to this market remain under discussion.

“Carbon is released in the atmosphere as carbon dioxide, where elevated levels help trap heat,” Oldham said. “Legislation and regulations adopted by industrialized nations are aimed at reducing carbon emissions and stabilizing or lowering the levels of carbon and other greenhouse gases in the atmosphere.”

In the U.S., government regulations address the amount of greenhouse gases such as carbon dioxide that a company can generate. While also finding ways to reduce their carbon footprint, an industry generating carbon also may purchase carbon credits as an offset.

“While companies such as power generators can be required to reduce their footprint under the Clean Air Act, others may voluntarily opt to participate,” Oldham said.

According to the Carbon Offset Research and Education program, a carbon offset credit is a transferrable instrument certified by governments or independent certification bodies to represent an emission reduction of one metric ton of carbon dioxide, or an equivalent amount of other greenhouse gases.

“The purchaser of an offset credit can ‘retire’ it to claim the underlying reduction towards their own GHG reduction goals,” the program states. “The key concept is that offset credits are used to convey a net climate benefit from one entity to another.”

That means an individual or business not producing greenhouse gases has a resource — carbon credits — that has a financial value. Mississippi, with an abundance of timberland and farmland, has the potential to monetize these resources in a new way.

Oldham said soil sampling that row crop producers already conduct may serve as more than a basic fertility management tool in the future.

“Carbon from anything formerly living is transformed into soil organic matter through biologically mediated decomposition,” Oldham said. “In plants, it is estimated that 20-70% of carbon recycled in the soil is taken up, or fixed, in the roots of annual crops.”

That means active farmland is potentially storing carbon rather than releasing it to the atmosphere. In developing markets, landowners can sometimes sell this asset as carbon offsets to industries trying to reduce their carbon footprint.

“Sellers should realize what is being brokered is not solely carbon, but data that includes the soil carbon, information about the tillage operations that may affect it and nutrient management in the field, and this raises a suite of questions,” Oldham said.

Those involved in this emerging market are seeking answers to many questions. They want to determine the carbon baseline of the soil so levels above the baseline can be monetized, along with how crop rotation affects the baseline. Other issues include who verifies the data, the carbon ownership situation between landowners and renters, and who ultimately owns the data.

As the market situation evolves, the MSU Extension Service’s Soil Testing Laboratory can quantify the amount of organic matter in soil and can detect both total carbon and nitrogen content in samples. Oldham said growers who want to enter the carbon market should immediately assess their current soil carbon levels.

“By knowing the carbon content of their soil, landowners can gauge the potential for increase through adopting certain best management practices such as reducing tillage, using cover crops and implementing crop rotations that can increase carbon content,” Oldham said.

“With this information, growers can assess whether ‘additionality’ of new soil carbon building practices on their operation is feasible,” he said. “Additionality is shaping up to be a significant issue, as it says producers will have to adopt some type of new practice in order to participate in the market.

“It is unclear at the moment whether producers already following management practices that store carbon effectively will be paid for continuing these, or only for adding new practices to increase carbon storage,” Oldham said.

“Existing carbon exchanges offer landowners the opportunity to monetize their forests in the form of carbon credits generated by timber,” Tanger said. “Some exchanges monetize timber conservation, with some paying a price annually for postponed harvests, while others purchase certain management practices above and beyond that commonly seen in working forests. ”

In May, Tanger hosted a webinar with a representative of the San Francisco, California-based carbon exchange company, NCX — currently the only exchange available to Mississippi residents. Jeff Wright of NCX explained that carbon forestry projects actually began in the early 1990s, although they have increased dramatically in public awareness and importance in recent years.

“Forest landowners can be paid for carbon capture in standing trees, as this will reduce some of the impacts from climate change,” Wright said.

Trees are high sources of carbon, with carbon accounting for 50% of the dry weight of wood and 25% of the green weight.

NCX is one company that has mapped the entire country with the goal of pay landowners for the ecosystem series they have been providing for free in the past, Wright said.

Many Mississippians have already taken advantage of this form of carbon marketing. Wright said 42% of the properties his company works with are less than 500 acres in size. The most recent annual payments ranged from $15 to $70 per acre for marketable timber where harvest was deferred for one year.

“If they then choose to participate, landowners specify the amount per harvest deferral credit they are willing to accept in return for not harvesting the marketable timber for one year in a bid process,” Tanger said. “If their prices are at or below the ‘market-clearing’ price for the auction, then all of their deferral units will be purchased and the landowner will be paid at the end of the contracted period.”