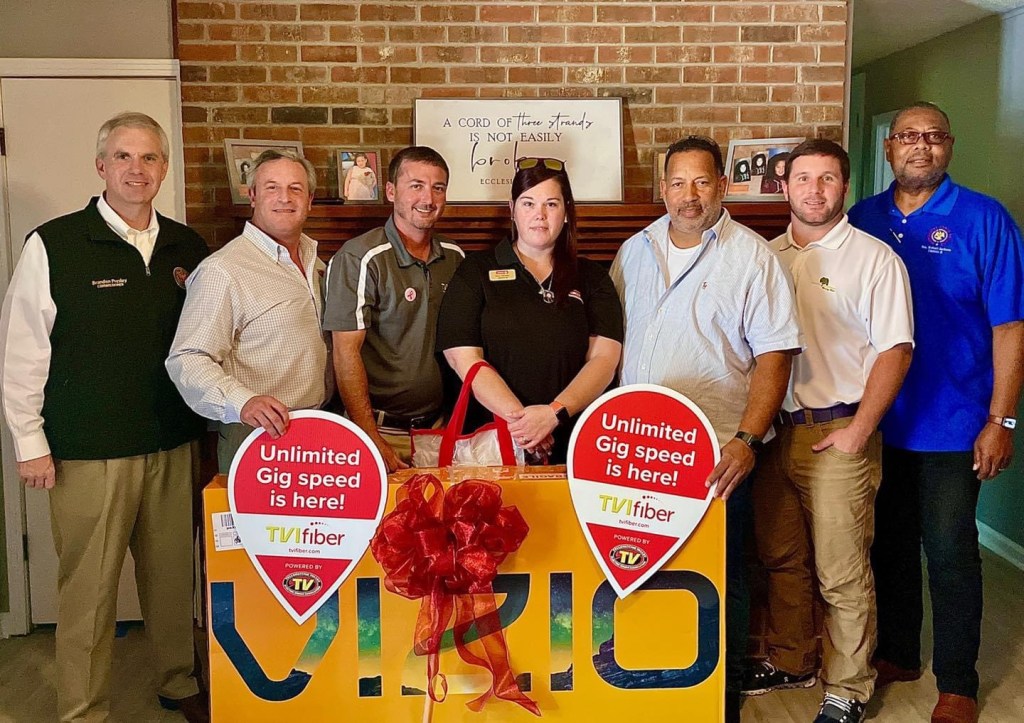 On Sept. 20, TVIfiber, a subsidiary of Tallahatchie Valley Electric Power Association, hit a monumental milestone when they activated their 5000th broadband internet customer.

“The pandemic has shown the importance of having reliable, high speed internet, for students of all ages, teachers, and professionals who work from home,” said TVEPA and TVIfiber Chief Executive Officer Brad Robison.  “TVIfiber was established in June of 2019, construction began in September of 2019 and the first customer service was activated in January of 2020.  At this time, we have completed almost 1,300 miles of mainline fiber, in the central and northern phases, which are comprised of Panola and Tate counties.”

On Thursday, Oct. 7, a celebration for the 5,000th customer was held at the residence in Sarah which is part of the rural Tate County service territory.

TVIfiber awarded Jessica Griffin a smart tv along with other gift items.

Griffin said she will use the reliable internet connection for her online class at Northwest Community College, and for her children’s school work and entertainment streaming services.

On hand for the celebration were  elected officials who have assisted in making it possible for Mississippi Electric Co-ops to provide broadband services, and helping to help secure funding for the projects.

Rep. Cedric Burnett said, “This is really special for rural residents to have high speed internet, especially for students since a lot of their classes are virtual learning.”

Rep. Trey Lamar  said, “This is a milestone accomplishment in our ongoing efforts to serve high-speed internet to all Mississippians and proof that our recent legislative decisions to allow co-ops, such as Tallahatchie Valley, to begin offering high-speed internet has produced a huge win for the citizens of Mississippi.  Congratulations to everyone involved who have helped to make this endeavor a reality.”

“I’m elated to see the benefits of our work at the state legislative level; state government partnering with regional electric power associations like TVEPA can and do make things happen.” said Sen. Robert L. Jackson.  “Over 5,000 households have high speed internet service, second to none in the U.S.”

Commissioner Brandon Presley was present for the historical event as well and stated “TVIfiber is changing the future of the rural areas they serve.  Their rapid deployment of broadband to their member-owners will be looked back on in future generations as the time in which rural Mississippi turned the corner.  The dedication of TVEPA employees, board and CEO Brad Robison, is amazing.  Working together, we are determined to see every Mississippian be able to compete in a new economy and world that requires broadband service.”

“I would like to thank all those who believed in the broadband initiative and have worked to make it possible for us to continue to provide quality and reliable electric service as well as high speed internet service, to our members,” Robison said.