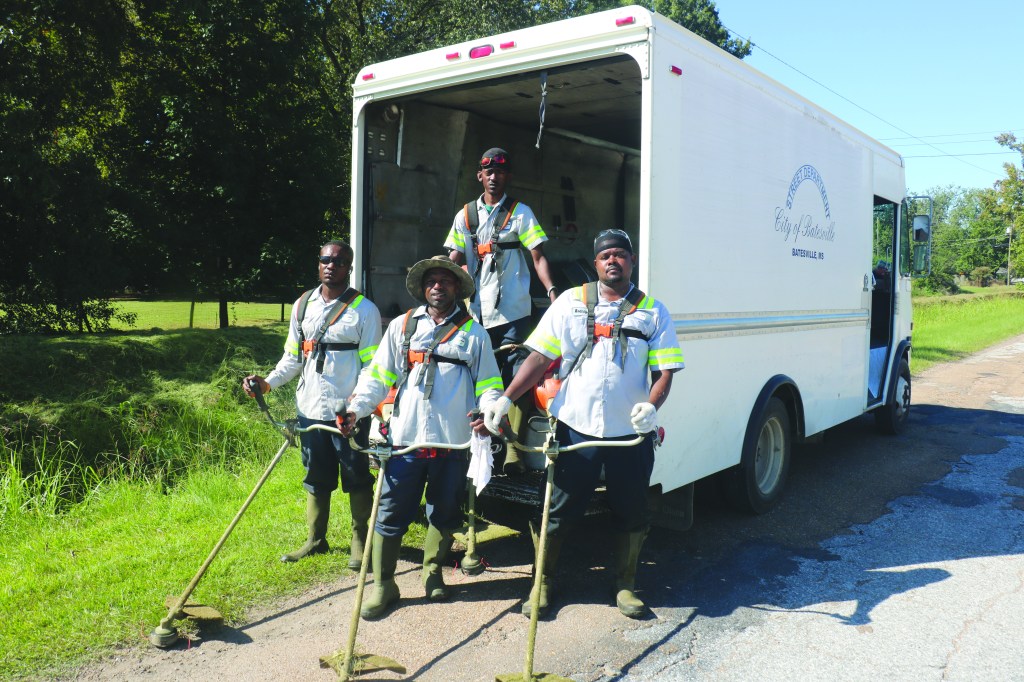 They are a lean, mean, grass cutting machine.

The machine is a City of Batesville work crew that specializes in the least sought after job in the Street Department, if not all of the town.

With their very familiar white box truck containing all their tools, the group of five to six workers are known as the “weed eater men” and can be found all around the city from early spring through late fall.

Their mission is simple, and their method monotonous. Charged with keeping grass on city right-of-ways, unreachable with mowers, trimmed to an acceptable level, often in scorching heat on high humidity days.

It’s just the men, their machines, and a lot of string and gas. Plus muddy ditches, filthy trash, wasps, and some fairly large snakes from time to time. No one is standing in line to take the men’s jobs, and it’s just as well. The crew likes their job, enjoys the camaraderie that comes with teamwork on difficult tasks, and takes pride in their contributions to making Batesville a beautiful city.

They also enjoy the attention and praise fellow citizens often give them.

“People might not know our names, but they know who we are because they see us all over Batesville and we have a lot of people who honk and wave at us and tell us we are doing a good job,” said one crew member.

“It’s a hard job and no lie sometimes I wonder how we do it, or why we do it, but we know that people see how good we do and that’s good enough,” said another.

What the crew does is remarkable. The city has miles of steep drainage ditches that can’t be mowed, several steep embankments that mowers can’t cut, and many areas that would go unattended if not for the men with their string trimmers.

A major project each year is maintaining the old cloverleaf and exit ramps areas at I-55 and Hwy. 6. The Mississippi Department of Transportation cuts those areas just twice a year, leaving all the other months of maintenance to the city, and ultimately to the Street Dept.

A large part of the exit ramp area can be cut with a tractor and mowers, but a considerable portion is left to the trimmers, including the edging of the median that runs under the interstate along the east entrance to the city.

The men are a cheerful group, joking and entertaining themselves as best possible while operating the trimmers on difficult terrain, many times standing on the sides of ditches so steep it’s hard to stand at all.

They all agree on the best and worst places they routinely keep cut.

“For sure Tubbs Road is the worst,” they said. “Those ditches are deep and they just keep going. You don’t think you are ever going to get out of there.”

Without their work to keep the Tubbs Road ditches clean, though, the flash flooding problems the city has during heavy rains would be compounded, causing much more damage.

One of the crew’s least favorite is the slope on Hwy. 6 under the water tower, and near the old Piggly Wiggly store. Not only is the hill hard to stand on, there are lots of bees and other stinging insects.

“When we get there, I get ready, because I already know I’m going to get stung,” a trimmer said, shaking his head and laughing. “But, hey, it’s what we do.”

What they do is vitally important for the city and the aesthetics on display for visitors and residents alike, is closely monitored by city officials.

“These guys are a great group and very important to the City of Batesville,” said Public Works Director David Karr. “I don’t think people realize how much grass they take care of. I wish more people would really notice how much the city does in keeping property looking nice. Our tax dollars go a long way with these guys and I wish we had another crew just like them.”

Some relief may be on the way, though, if aldermen approve a line item in the budget for a self-contained remotely controlled grass cutting machine capable of cutting on slopes of up to 50 degrees in many places where traditional mowers can’t be safely operated.

The robot mowers have a 48-inch cut path and can cleanly navigate through tall weeds and rough terrain.

With a price tag of $54,000, some aldermen were initially hesitant about the purchase, but Karr said the mower will easily pay for itself in one year.

“It would take a big load off the Street Department right now, but it wouldn’t put the trim men out of business by no means. They stay behind from day one every spring and there is always plenty of grass for them to cut,” he said.

Photo: The Street Department’s trim crew cuts miles of ditch banks and maintains grass on city-right-of-ways across Batesville most of the year. Pictured are (from left) Brandon Peterson, Eddie Cole, Rodney Johnson, and (in truck) Latauivs Faulkner. Kendron Faulkner was out sick the day of this photo.