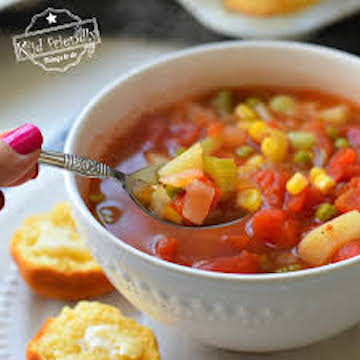 School’s back in session, college football kicks off and Monday is Labor Day. Since 1894 when the US Congress officially declared the first Monday in September as a day to celebrate working people, most Americans have been enjoying a day off from their labors.

Because there’s not an official menu for Labor Day, like turkey for Thanksgiving and peas for New Years, I’m proposing that it should be homemade vegetable soup (HVS). It makes sense to me, because now’s the perfect time to gather up the last of the fresh vegetables and to enjoy summer’s final flavors especially since we have a long weekend to make it.

It’s a process, HVS is rather labor intensive.  I remember having soup at DW’s mother’s house which his grandmother, Miss Effie, made.  My sister-in-law Charlene once explained how they did it.

Start with a big pan, she said, because you can’t just make a small amount.  Miss Effie made hers in an old blue enamel cooker.  As Charlene put it, “you build your soup.”  They started with cooking a chicken until tender, then pulled the meat off the bone and shredded it.  Fresh vegetables were used when available, but sometimes canned or frozen had to be used.  Just depended, she said.

Miss Effie cooked butter beans in the chicken broth with chopped onion, sliced carrots, green beans, tomatoes, cut up potatoes, okra but no black-eyed peas.  Sometimes they were too “strong tasting,” she thought.  If butterbeans had been frozen that summer, she cooked them first before adding them to the soup.  It was important to gently simmer the soup and never let it come to a boil.  Boiling gives soup a different flavor and makes it cloudy and Miss Effie didn’t want her soup to be “cloudy.”

After simmering the soup for a while, she added the chicken and cooked ground chuck, or when they still had cows, she cooked and shredded a beef roast.  The soup was seasoned with salt and pepper and lastly, she’d add a can of English peas.  She grew green peas in her spring garden but didn’t have them in late summer so the canned ones had to do.  Then she would taste it, if she thought it “too poh,” (meaning it was lacking something) she might add a stick of margarine or a pinch of sugar…. or a dish rag for flavor.  Not really, just a soup-making-day joke they enjoyed.

My grandmother’s HVS was made with all fresh, homegrown ingredients.  My momma once told me that they had potatoes and onions stored year-round under the house and that HVS making always took place late in summer while they still had vegetables in the garden or were being peddled around the square.   I do remember us having soup at my grandparents’ house and laughing about enjoying soup and sweating while we ate.  Temps don’t regard Labor Day as the end of summer.

Our soup was made in a dish pan.  Momma said it was a 10-ingredient soup started off by cooking tomatoes, chopped onion and sliced carrots in water.  My Grandmother added butter beans, black-eyed peas, diced potatoes, corn cut off the cob, but no okra.  I can just see her standing at the stove for hours, stirring and “stewing” over the soup, her eagle eye scanning the soup constantly for corn silks.

And it was her personal quest to keep the soup from sticking.  A hot pepper pod was added for a little heat and flavor plus salt and pepper.  And in the meantime, she cooked stew meat to add to the soup.  The beef broth, though, was not used because it would hide the flavor of the vegetables and HVS must taste of vegetables.  The last ingredient would be a small amount of spaghetti noodles, broken into small pieces, cooked separately and added at the end to keep it from sticking.

HVS was meant to be served with cornbread and sweet tea with melt-in-your-mouth homemade fried pies…peach or apple… for dessert.   I can just smell the soup and taste the pies.

So yes, this menu will just hit the spot this weekend. Happy Labor Day to all you hard working folks out there!  And one extra-huge thank you to our military, first responders, health care workers and all those good people who will be working this weekend, you are our heroes!  Everybody take care.

This will get you started building your soup.

Combine water onion, carrots, and tomatoes in a large pan; slowly bring to a boil.  Add remaining ingredients, simmer gently until all vegetables are tender, could take a couple of hours. Stir frequently.  Add other ingredients as desired to build your soup:  about 2 cups cooked meat (shredded chicken, crumbled ground chuck or beef roast cut in cubes); sliced okra, a hot pepper pod, green peas, green beans, cooked spaghetti or macaroni noodles.  Continue to simmer, taking care not to let it boil; stir gently as flavors blend for at least one hour.  Season with salt and pepper and other seasonings as desired.  Will make at least 2 gallons.