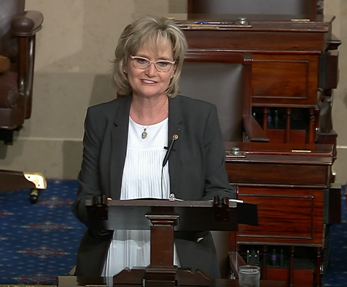 U.S. Senator Cindy Hyde-Smith  this week assailed proposed tax changes in the Democrats’ $3.5 trillion reckless tax and spending spree for its outsized harm to family farms and ranches in Mississippi.

Hyde-Smith joined Senate Agriculture Committee colleagues and other farm state Republicans on the Senate floor to criticize the burdens placed on family farmers and ranchers under the massive tax and spending plan the Democrats plan to force through the Senate this summer.

“I know there is a deep desire on the other side of the aisle to enact a reckless tax and spending spree that makes Americans more dependent on the federal government, but family farms cannot be caught up in the administration’s punitive dragnet to find ways to pay for it,” Hyde-Smith said.

“Any changes to the federal tax code should be geared toward supporting economic growth and helping the next generation keep these family-owned operations alive.  I hope we can all come to our senses on this,” she said.

“More than three years of net cash farm income would be needed to meet these additional tax obligations.  That is simply unmanageable,” Hyde-Smith said.  “I am perplexed as to why Democrats want to place the highest tax burden on one of the most economically challenged and socially disadvantaged states in the nation, my home state of Mississippi.”

The Senator pointed out that the Democrats’ tax plans would have a national impact on the continuity of family owned and operated farms, which represent roughly 98 percent of all U.S. farms.  These farms account for 44 percent of total U.S. farm production.

“For those who are willing to pay for reckless spending by punishing America’s farmers and ranchers and everyone who relies on them, you will be doing far more than that,” Hyde-Smith said.   “You will be running off our next generation of farmers.  You will be making it easier for large corporations owned by our foreign adversaries, such a China, to buy up available farmland, and you will be ensuring that every American pays more for the food they eat and the clothes they wear.”

Hyde-Smith and other Senate Agriculture Committee Republicans continue to await the Biden administration’s response to their request for proof that President Biden’s changes in capital gains tax rates and the modification to stepped-up basis on America’s family farms and ranches would not affect 98 percent of farm estates.  The Senators issued that request in May.