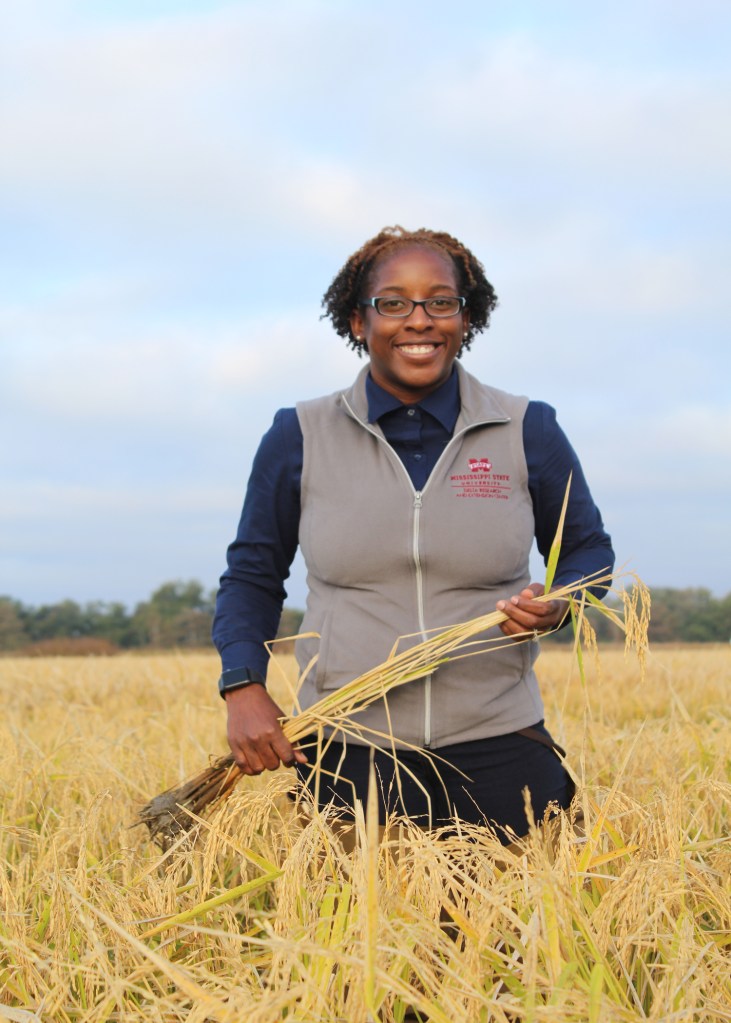 SANDERS -- Mississippi State University researcher Tameka Sanders is examining the impact paraquat drift has on rice when it occurs midseason. (Photo by MSU Extension Service/Ben Lawrence) Alt text -- A woman holds a stalk of grain while standing in a field.

STONEVILLE – Researchers are learning how to manage rice fields when paraquat drifts onto them early and late in the season, but what impact this herbicide has on grain quality and what happens when drift occurs midseason are still unknowns.

These questions are at the heart of doctoral research Tameka Sanders is doing at the MSU Delta Research and Extension Center in Stoneville. Her work began in the 2019 growing season and will conclude after the 2021 season.

Paraquat is frequently used to burn down weeds in soybean fields before planting and again to dry the plants in preparation for harvest. Rice is extremely susceptible to damage from this herbicide. In the Delta, rice fields are frequently located adjacent to fields where paraquat is used. Environmental conditions or improper spraying can allow the chemical to drift from the intended fields onto rice fields, causing damage.

“The problem is that oftentimes, rice is grown right across the turnrow from soybean fields or other crops,” Sanders said. “When you are spraying the soybeans, paraquat can move onto the rice. It depends on the rate and the growth stage, but this drift potentially can totally kill the rice or harm it so badly that the yield is greatly reduced.”

Sanders, a Greenville native, is continuing a research project addressed by two other graduate students under the leadership of Jason Bond, a weed scientist in Stoneville who works with both the MSU Extension Service and the Mississippi Agricultural and Forestry Experiment Station.

“Paraquat can injure any crop when sprayed at the wrong time, but no matter when it contacts rice, it’s not a good time,” she said.

Wind, temperature, spray equipment, the height of the sprayer, and many other factors influence drift, or the chemical’s unintended movement onto another crop. Previous research looked at paraquat drift during early- and late-season rice development.

“My project bridges the gap between the two,” Sanders said. “We wanted to learn what happens to rice during its entire life cycle if it comes in contact with paraquat.

”Data collection will reveal how rice responds to different rates of paraquat exposure, multiple paraquat exposures, exposure to both paraquat and glyphosate, and paraquat’s effect on grain quality. Bond said the last part of the research is significant.

“The most unique part of this project is examining the effect of paraquat on the quality of the actual kernels of rice,” he explained.

Once evaluated, this data will help inform growers’ decisions on how best to manage crops when rice fields have been exposed to paraquat drift.

“A bad exposure may lead the farmer to back off spending money on inputs, while, if the field recovers from a mild exposure, that grower may decide to pour in inputs in hopes of helping the crop make up the yield difference,” Bond said.

“When a drift event happens, we never know the rates and what the yield reduction will be, but this research will give us data on what kind of yield and grain quality losses are expected when rice is hit with drift at different points in the growing season,” he said.