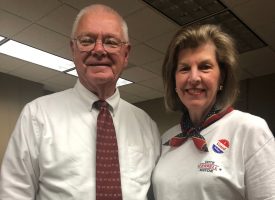 ’By Jeremy Weldon
Less than 12 hours after confirmation that Hal Ferrell will be the next mayor of Batesville, the businessman and former alderman, was speaking at a civic club breakfast meeting, thanking voters for their confidence, and outlining in general his plans for the next City Hall administration.“My focus is like a rudder on a ship,” Ferrell told the Exchange Club of Batesville last Wednesday (June 9) morning. “I’m just one little spot in there, but I think I can direct and encourage the development that we need, and that’s the way I want to start.”Ferrell, 74, told Exchangites he campaigned on the promise to work hard for the citizens of Batesville, and he intends to work harder with the election over. Ferrell convincingly beat two other candidates, Mayor Jerry Autrey and fellow businessman Eddie Nabors on what many locals described as the rainiest election day ever in Panola County.Besides the Exchange Club, Ferrell has made the rounds of many city departments and local businesses and has taken part in dozens of meetings since the election, gathering information and preparing to take the lead at City Hall. He and other city officials will be sworn in at the end of the month and take office July 1, by state statute.“It doesn’t make any difference when I take office, I’m starting to work right now,” Ferrell said.The mayor-elect briefly touched on a few topics, highlighted by his plan to focus on the promotion and growth of local businesses.“We are doing a great job with industry right now, and it’s not broke so I’m not going to fix it,” he said. “I want us as a community to focus on our local businesses and see growth. I want everybody to know what great businesses we have, who they are, and what they do. We are going to focus on a different local business each week and see what can be done to help them.”Ferrell said another goal is improving customer service relations with the taxpayers and citizens of the city. “When you go into City Hall and ask about trash, I want City Hall to be able to tell customers about trash and not tell them to call the county, and the county will tell them to call the city,” he said. “It’s that kind of approach I want to spearhead and turn the ship in that direction.”“I want to be a bulldozer in some things, and I want to carry some people along with me and get them excited. It’s all positive motivation and a positive approach,” Ferrell said. “We have good people in the city right now, but the fact is that I think we need more leadership.”

Aggressive cleaning of ditches to help with draining during flash floods, and better preparation for ice and snow storms is also near the top of his agenda as the new mayor. He said the city could be better prepared for some events, but there wasn’t ever a good reason to close City Hall, referring to a decision by the current mayor and aldermen to keep employees home and city government closed during the ice and snow days earlier this year.“The city can’t close down, it just can’t. We have to have somebody at City Hall answering the phone and trying to find out information for our citizens,” he said.Mayor Autrey was scheduled to lead his last regular board meeting on Tuesday, June 15. Ferrell’s first meeting as mayor will be Tuesday, July 6.Ferrell won all four precincts in the Municipal Election, receiving 650 (45.8 percent). Eddie Nabors garnered 393 votes (27.6 percent), and incumbent Mayor Autrey received 374 votes (26.4 percent).There were no changes on the board of aldermen with each incumbent, except one, winning handily. The Ward 3 race was the closest, where Stan Harrsion held his seat by 34 votes.For alderman-at-large, Teddy Morrow received 1,097 votes and there were 47 write-ins. Morrowdid not have an opponent this election cycle.In Ward 1, incumbent Bill Duggar received 283 votes, James “Whiz” Whitaker got 163 votes, and Billy Prince got 49 votes.In Ward 2, incumbent Bobby Walton received 187 votes and there were 8 write-ins. Walton defeated Ted Stewart in the Democratic Party Primary in March and had no general election opponent.In Ward 3, incumbent Stan Harrison beat political newcomer Chase Montgomery 200-166.In Ward 4, incumbent Dennis Land outpolled Walt Karr 220 to 97.Vote totals show 1,421 voters cast uncontested ballots on election day, 13 votes in boxes were approved affidavits, and 128 absentee ballots were recorded.Of the 5,035 registered voters in Batesville, 1,562 took part in the election, or 31 percent