Flag Day a reminder of the original ‘Bellamy Salute’ in America 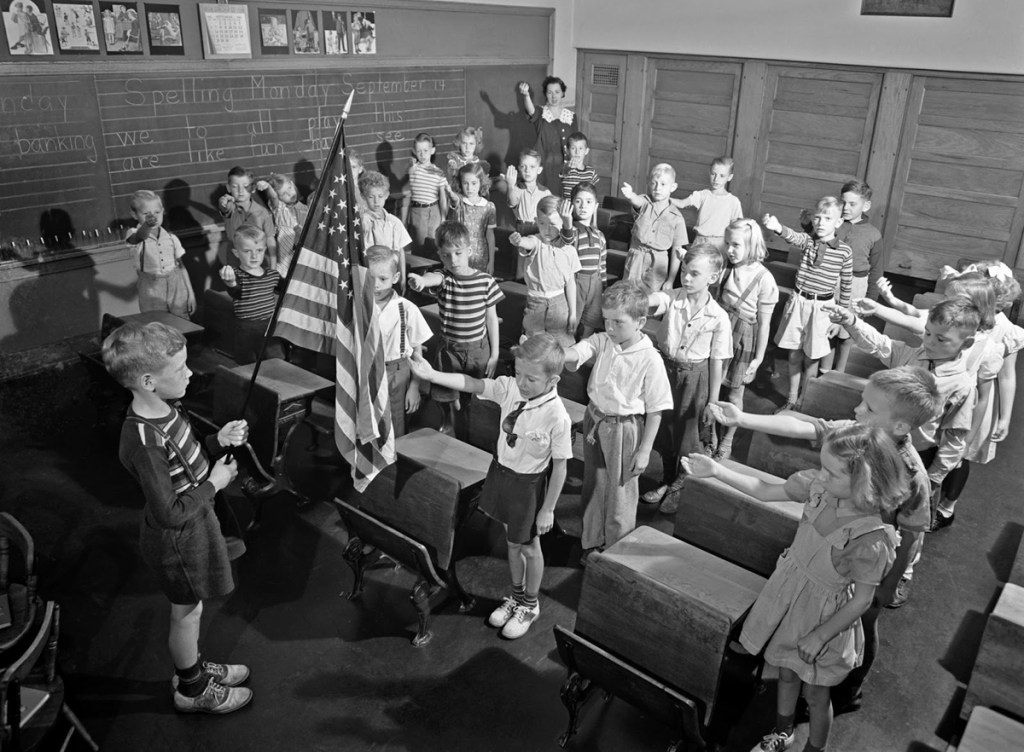 The following is a reprint from an article that appeared in The Panolian on Flag Day in June, 2018.

There was a time when Americans saluted the flag with their right arms stretched out. The stiff-arm salute was known as the “Bellamy Salute,” as it was created by the author of the Pledge of Allegiance, Francis Bellamy.

Bellamy, an extreme socialist, wrote the pledge in the 1890s with the idea that it would encourage patriotism for schoolchildren to recite it every day. The Bellamy salute was intended to be non-militaristic. In the photo above, the schoolchildren have their palms facing upward. When properly executed, the palm should vertical.

I’ve seen a number of photos and videos of schoolchildren reciting the Pledge with their palms facing downward, identical to the Nazi salute.

It was this similarity to the Nazi salute that caused Congress to modify the Flag Code in 1942 to change the salute to the flag to the hand being held over the heart. I’ve seen several photos, probably taken right after the change, that show children with their hands over their hearts in a “salute” position rather than flat over the heart as practiced today.

It is unfortunate that almost any politician who waves at a large crowd is at some point going to give a wave or salute that looks similar to a Nazi salute. Extreme bodybuilders have trouble fully straightening their arms, and perhaps politicians should make a point to wear an elbow brace to keep their right arm from extending all the way out lest their opponents use the opportunity to portray them as a Nazi.

My father mentioned to me years ago a book by Francis Bellamy’s brother, Edward, called Looking Backward 2000-1887 (free on Kindle). It’s a Utopian, Rip-Van-Winkle-style novel that he was assigned in college by his favorite professor, Jim Silver, in which a man wakes up to find an America vastly changed from the dog-eat-dog capitalism of 1887.

Both Bellamys were quasi-Communists, but the book nevertheless has some amazingly spot-on predictions and interesting observations.

For example, the book describes a type of credit card, and a shopping system where all goods could be reviewed and delivered overnight by pneumatic tube (in fact, I think such a system was used by the French postal system in Paris); sort of like today’s Internet shopping. Radio had not been invented at the time the book was written, but Bellamy envisioned a wired (cable!) system that would allow people to listen to 25 stations, including some of the finest concerts, in their homes.

In Year 2000 Boston umbrellas have become obsolete. Our Rip-Van-Winkle protagonist, Julian West, is surprised to discover that the streets have covers that are extended when it rains, thus eliminating the need for an umbrella. His modern-era companion, Edith Leete, expressed a bit of skepticism as to whether streets were ever full of people holding individual umbrellas. I found the passage interesting, certainly reflective of Bellamy’s ideology, and thus share a few paragraphs (emphasis added):

. . . I was much surprised when at the dinner hour the ladies appeared prepared to go out, but without either rubbers or umbrellas.

The mystery was explained when we found ourselves on the street, for a continuous waterproof covering had been let down so as to inclose the sidewalk and turn it into a well lighted and perfectly dry corridor, which was filled with a stream of ladies and gentlemen dressed for dinner. At the comers the entire open space was similarly roofed in. Edith Leete, with whom I walked, seemed much interested in learning what appeared to be entirely new to her, that in the stormy weather the streets of the Boston of my day had been impassable, except to persons protected by umbrellas, boots, and heavy clothing.

“Were sidewalk coverings not used at all?” she asked. They were used, I explained, but in a scattered and utterly unsystematic way, being private enterprises. She said to me that at the present time all the streets were provided against inclement weather in the manner I saw, the apparatus being rolled out of the way when it was unnecessary. She intimated that it would be considered an extraordinary imbecility to permit the weather to have any effect on the social movements of the people.

Dr. Leete, who was walking ahead, overhearing something of our talk, turned to say that the difference between the age of individualism and that of concert was well characterized by the fact that, in the nineteenth century, when it rained, the people of Boston put up three hundred thousand umbrellas over as many heads, and in the twentieth century they put up one umbrella over all the heads.

As we walked on, Edith said, “The private umbrella is father’s favorite figure to illustrate the old way when everybody lived for himself and his family. There is a nineteenth century painting at the Art Gallery representing a crowd of people in the rain, each one holding his umbrella over himself and his wife, and giving his neighbors the drippings, which he claims must have been meant by the artist as a satire on his times.”

Bellamy’s Utopia relies on a high degree of statist force, although this is subtly indicated in the novel. And the author is convinced that one of society’s major economic problems is too little centralized control over the economy. He believes everything would work better without the pesky free market and the silly duplication of goods and services it produces. Incredibly dumb, but people didn’t know that in 1887.

Despite its silly economics, Looking Backward is an interesting and insightful book and I suggest it to anyone. As for Bellamy salute? Probably better to skip it.

Written by Frank Hurdle, an Oxford lawyer and land agent.