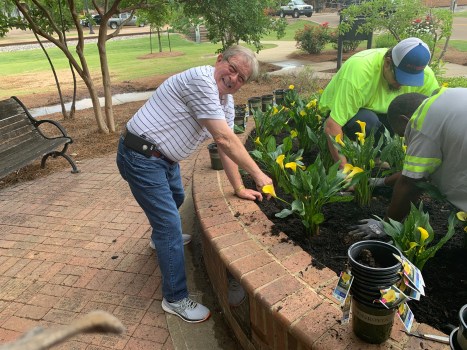 Mayor Jerry Autrey helped with the new flower garden area made by city employees on the Square last Friday. 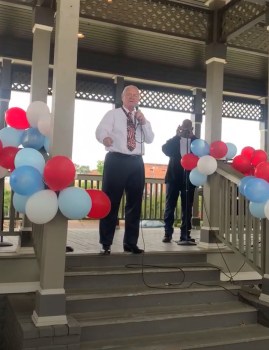 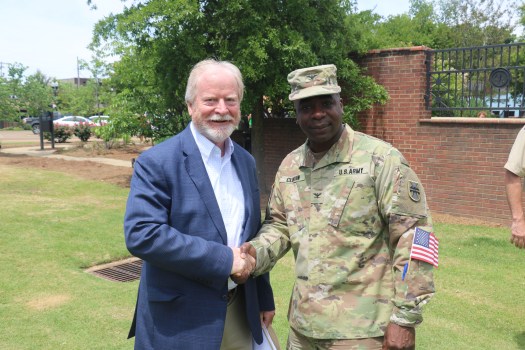 The three mayoral candidates for the top job in the City of Batesville government spent the weekend attending rallies, civic programs, and hustling for votes leading up to next Tuesday’s (June 8) election.

Candidates in the three city wards that are contested were doing the same, and all are making plans for a final week of campaigning before Batesville voters cast their ballots.

The race for mayor has been one of the most contested in decades with three well-known personalities vying for the post. Batesville, like most Mississippi municipalities, has a relatively weak mayor, politically, by design. The mayor sets the agenda for board meetings but has no vote (and can’t make motions) unless there is a tie vote.

The mayor can veto any action taken by the board of aldermen, but those five officials can also override the veto with four votes. In Batesville the mayor is a figurehead that, without a vote at the counsel table, is mainly a cheerleader for the city and it’s projects.

It’s an important position to the economic growth and development of Batesville because new industries often contact the mayor’s office to form relationships before the process of locating available buildings and land begins.

Mayor Jerry Autrey, who has served four terms, has this year drawn two strong challengers – businessmen Hal Ferrell and Eddie Nabors. Each have campaigned at a variety of events and worked hard to secure votes from all sectors of the city.

During a recent candidates forum, local NAACP chapter president Gloria Tucker, made a salient point when she addressed the three candidates in the audience question and answer portion.

“I think all three of you candidates recognize that whoever gets elected will win because of the minority vote,” Tucker said. “I hope you all realize that the minority agenda will be what decides who is the next mayor of Batesville.”

Tucker was, correctly, summarizing next Tuesday’s voting, by pointing out that the three white men on the ballot will likely divide (to some degree) the white vote with the winner being the candidate who garners a majority of the black vote.

With that in mind, the mayoral hopefuls have campaigned equally all over the city. The candidates have each spent considerable money on newspaper advertising, digital messages, and plenty of yard signs.

Conversations with each candidate reveal that all three men believe they and their supporters have covered the city as best possible, and each is confident they will emerge victorious next Tuesday.

In Ward 3, incumbent Stan Harrison is challenged by Chase Montgomery, and in Ward 4 incumbent Dennis Land will face off with Walt Karr.

Alderman-at-Large Teddy Morrow did not draw a challenger for his seat this election cycle.

All of the races are “winner take all” and there will be no runoffs.