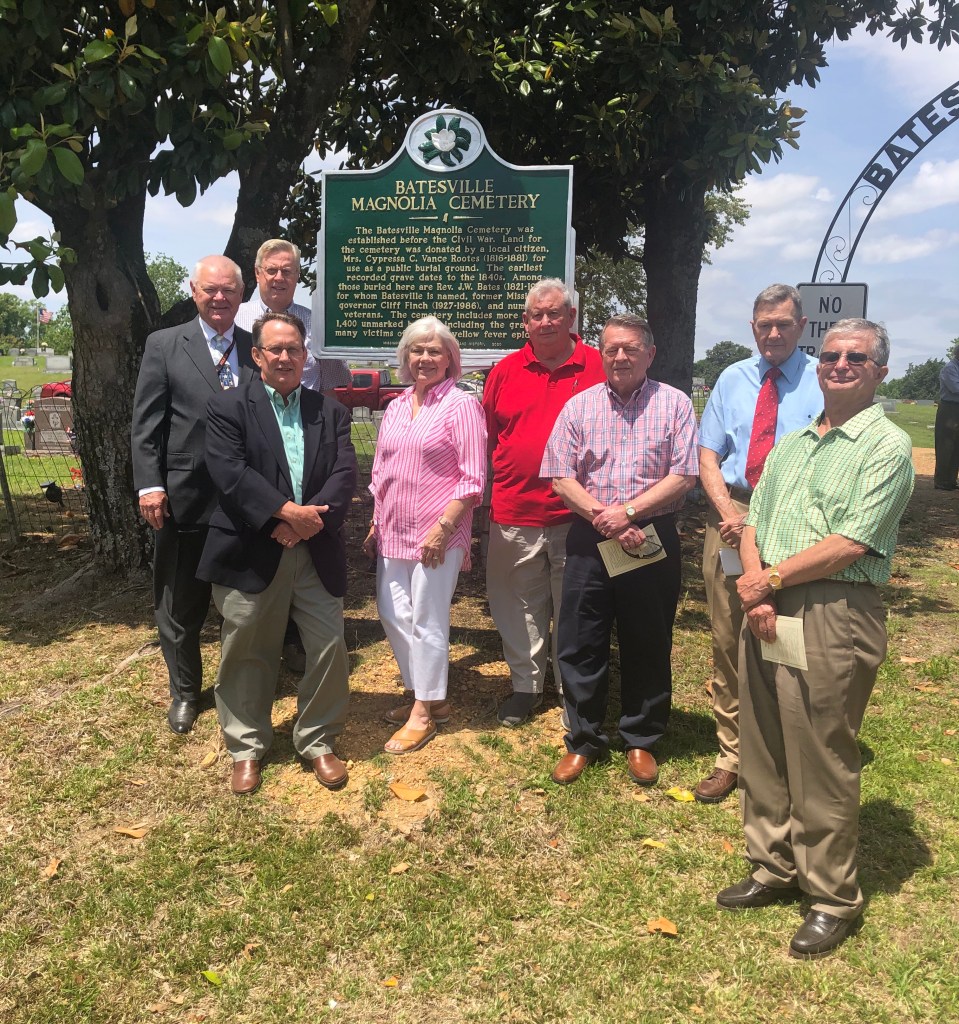 The official dedication of the historical marker and recognition of donors and volunteers at Batesville Magnolia Cemetery last Thursday, May 20, was the culmination of years of work by the property’s Board of Directors and countless hours of community efforts to preserve the local landmark.

John Nelson, the lone charter member of the Panola County Historical and Genealogical Society opened the dedication ceremony with a brief history of the cemetery and introductions of guests for the day, including Jim Woodrick, a retired deputy preservation officer for the Mississippi Department of Archives and History.

Board member Dorothy Lou Aldridge compiled facts and made application to the Department of Archives and History, and the Mississippi Department of Transportation erected the marker May 12, 2020, although no ceremony could be held at the time due to the pandemic.

Batesville Magnolia Cemetery was established before the Civil War on land donated by a local citizen, Mrs. Cypress C. Vance Rootes (1816-1881) for use as a public burial ground.

The cemetery includes more than 1,400 unmarked burials, including the graves of many victims of the 1878 yellow fever epidemic.

Batesville Magnolia Cemetery is not owned by the City of Batesville, or privately, but is governed by a Board of Directors made up of Kenneth Brasell, president, Dorothy King Aldridge, Raymond Belk, Hal Ferrell, Buddy Gray, Rupert Howell, and Jack King.

That group, with many other volunteers and other benefactors, oversee the maintenance and the operations of the cemetery.

Also part of the dedication was Maribeth Haire, vice-president of the Batesville Garden Club, who told the attendees about the renaming process of the cemetery.

Jacki Sergi, president of the Batesville Women’s Club, related the history of the iron gates at both the east and west entrances to Batesville Magnolia, accessible from Hwy. 51S and Eureka Road. The gates were paid for with a fundraiser and installed in 2001 and 2002.

Prayer was led by Jennifer Pardoe, Regent of the James Gilliam Chapter of the Daughters of the American Revolution. Boy Scout Troop 478 presented colors and led the Pledge of Allegiance. Sarah Dale Shaffer sang the National Anthem, and Calvin Land, Adjunct Quartermaster of  VFW Post 4968 introduced the board.

In his remarks, Nelson said at no time in the long history of the cemetery has it ever been cared for more, or maintained to its high level, as it currently has.

Among the many improvements made over the years by volunteers of time, labor, and equipment, the cemetery has seen a debris dump removed, added gravel extension roads and circles, filling of washouts, an increase in the number of gravesites by clearing and reclaiming portions of the 16-acre property, and numerous plantings of bushes growing east to west near the north side.

The actual unveiling of the historical marker (located at the main Hwy. 51 entrance) was performed by descendents of Mrs. Cypressa Vance Rootes. On hand were Shellie O’Keefe Harrision, her brother Rush O’Keefe, both children of Margaret Vance O’Keefe; their cousin Val Vance Burgess. The three are great-great-great-grandchildren of the original Mrs. Rootes.

Shellie and Rush both grew up in Batesville.

The cemetery is governed by the board of trustees and all finances are handled through the Trust Division of First Security Bank. Trustees have for the past few years sought donations as the money held in the 1979 trust began to dwindle with low interest rates and low gravesite sales due to the popularity of cremations and other burial options.

Since a campaign to replenish the fund was begun in 2019, nearly $75,000 has been given as gifts or memorial from more than 250 families and organizations.

Judge George C. Carlson and board member Hal Ferrell visited civic clubs and organizations to help raise awareness for the need of perpetual care funds at the cemetery.

Anyone interested in learning more about the historical piece of Batesville and Panola County, or to make a donation, should visit the website www.batesvillemagnoliacemetery.com