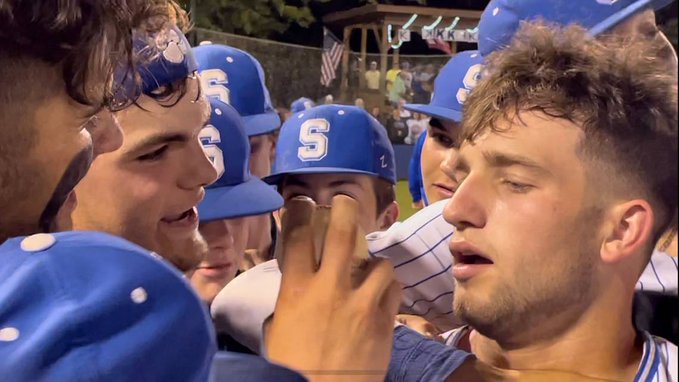 After powering two fastballs past the batter for an 0-2 count with two out in the top of the seventh inning, Stone High pitcher Gehrig Conard stepped off the back of the mound, adjusted his cap and began to rub the back of his neck.

The emotion of what had been an impossible couple of days began to catch up with Conard, and his teammates on the infield walked up to console him.

The junior’s father, former Stone High baseball coach and athletic director Kevin Conard, died Wednesday while cutting grass at his home. He was 44.

As teammates gathered around and hugged him in the middle of the infield Friday night, Gehrig was thinking of his father.

“Just flashes of him, seeing him smiling in my head,” he said. “He’d always come up to me with a smile after the game. To think I was going to have another good game in his name, it meant a lot. I just had to collect myself.”

Conard did indeed honor his father with an incredible performance under terrible circumstances in a 5-0 win over Purvis in Game 1 of a third-round Class 4A playoff series.

Two days after the death of his father, he tossed a complete-game shutout, holding the opponent to two hits and striking out 10 batters with four walks.

Conard has put together several dominant performances this season, including a whopping three no-hitters.

“To be honest with you, I think he would have rolled over in his grave if I didn’t (pitch),” Conard said. “He was one of the toughest men I’ve ever met, and he’s instilled a lot of stuff in me. I just want to respect him in every way possible, and I think he would have wanted me to go out there and do what I did.”

When Gehrig rushed three fastballs past the final man Friday night, he registered on the radar gun at 91 miles per hour — his best velocity of the season.

Where did that extra gas come from in the seventh inning?

Once Conard registered the final out, he was mobbed by teammates on pitcher’s mound.

Most of the players sobbed as the reality of the moment sunk in for everyone in the ballpark.

The stadium, which played host to the season’s largest crowd, was still packed as Conard hugged his teammates and then walked up to the stands to point out family and friends.

“It really showed me how much love and support that my dad had, and all the lives he impacted,” Conard said. “It showed me how much people love me, and appreciate me and him. I’m glad everybody was here. From family to people who just knew him, they wanted to come here and honor his name. It’s amazing. That’s the only word to describe it.”

Conard’s teammates and coaches were in awe as the game unfolded, watching their left-handed ace look every bit in control as they’ve seen him all season.

After the game, teammates smiled and fought through tears as they handed Conard the game ball.

“We’ve all been talking about how we’ve never seen anything like this. It was just like a movie,” said Triston Hickman, Stone High’s senior catcher. “It was like we were destined to be here, and it’s destined to happen. I’ve never seen anything like that, but I’m glad to be a part of it, and I’m glad God put us in this position because it was awesome.”

A large number of friends and family gathered at the Conard house Wednesday night, doing what they could to offer support to Crystal, Kevin Conard’s wife, and their two sons, Gehrig and Kasen, and daughter, Alexis.

On Friday night, it was Gehrig’s performance that offered a lift to a community just starting the grieving process for a man who made an impact on countless people in the community as a baseball coach, assistant principal and athletic director.

“I’ve never seen a person handle something like that the way he has,” Hickman said. “I definitely wouldn’t have, but his dad made him that way. (Gehrig) is one of the strongest people you’ll ever meet. That’s the reason his dad was hard on him, to prepare him for moments like this and the adversity he’s going through.

“Out of all the people, I knew he would come out here and do this tonight. That’s just the person his dad made him, God made him. It’s just awesome to be around him and be exposed to him.”

After the start of the series was delayed by a day, it was no surprise to Stone High coach Sean Miller when Conard said he wanted to pitch Game 1.

“From the get go, there was no question Gehrig was going to get the ball,” Miller said. “We were going to give him that shot.”

Just like those who watched from the packed bleachers, Miller was thoroughly impressed by his junior pitcher.

“Absolutely amazing, I couldn’t have done it,” he said.

“It’s just a special moment. I’ve been coaching for a lot of years and I’ve never seen a kid go out there under those circumstances and do what he did. He is without a doubt the toughest kid I know. I was proud to be a part of it.”

On top of his stellar showing on the mound, Conard finished 3-for-4 at the plate with an RBI.

At 3 p.m. Saturday at Purvis, the Tomcats will aim for a series sweep to earn a spot in the Class 4A South State title series.

“I’m glad we got the win, but we’ve got to play another game,” said Conard, who improved to 10-1. “We’ll try to beat Purvis tomorrow.

“I don’t really know how I feel … not satisfied at all. He wants us to go win, so that’s what we’re going to try to do.”

Patrick Magee is a sports writer who has covered South Mississippi for much of the last two decades. From Southern Miss to high schools, he stays on top of it all.