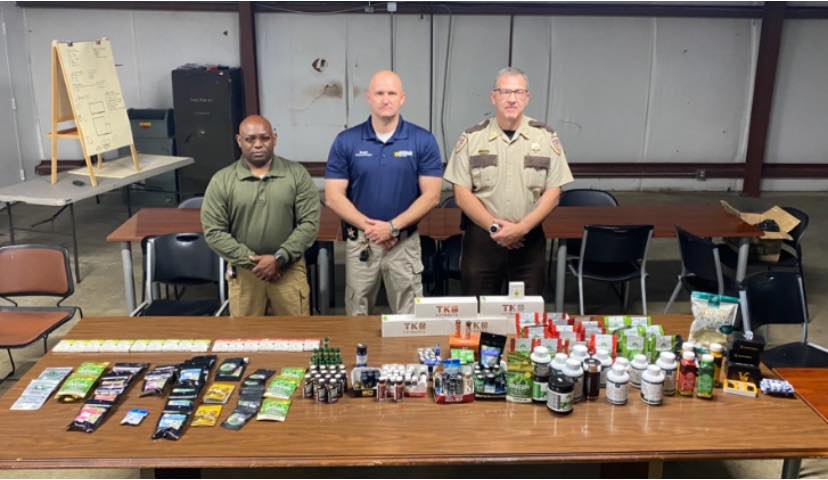 The Panola County Sheriff’s Office is reporting the arrests of two individuals on Wednesday, May 12, after a search warrant was issued for Crossroads Grocery on Hwy. 6 in east Panola County. Sheriff Shane Phelps said deputies had received several reports of Kratom – banned in the county – being sold to adults and juveniles at the location.

After receiving the complaints, the Panola County Narcotics Unit conducted an undercover buy out of the store resulting in a search warrant being executed. While executing the search warrant, with the assistance of Batesville Police Special Operations Division, thousands of dollars of Kratom were seized and two arrests were made.

Kratom is a tropical tree native to Southeast Asia, with leaves that contain psychoactive (mind-altering) opioid compounds. It is more commonly used in the Asia Pacific region than the United States.

Also known as herbal speedball, ketum, kahuam, ithang, thom, it consists of fresh or dried leaves that are chewed whole, mixed with food or brewed as a tea.  Kratom is sometimes sold as a green powder in packets labeled “not for human consumption,” sold as a liquid extract or gum, or sold in pill form (gel capsules).

Kratom is consumed for mood-lifting effects and pain relief and as an aphrodisiac. People who use kratom report increased energy, sociability and alertness.

The City of Batesville banned the sale of Kratom more than a year ago, and earlier this year Phelps asked the Board of Supervisors to also ban the sale of the substance at stores outside the city limits. That request was approved and storeowners were given a few days notice to get rid of their inventory.

Last month another store in east Panola – Terza One Stop – was also suspected of selling Kratom and deputies obtained a search warrant, resulting in seizure of cash and illegal substances, and the arrest of one person.