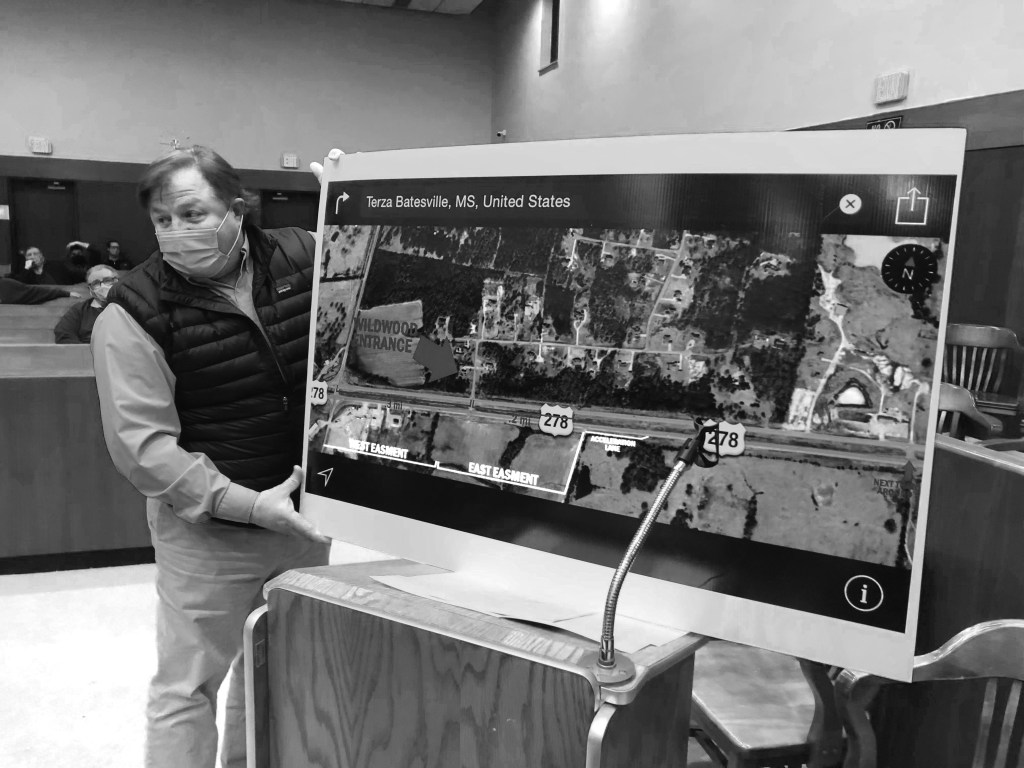 Residents of Wildwood Subdivision argued passionately Monday night against a special exception request by D G Holdings to build a new Dollar General Store at 22350 Hwy. 6E, directly across the highway from the entrance to the upscale housing development.

Monday’s meeting at the Sardis Courthouse was the public hearing set by the Panola County Land Commission, and an opportunity for the Wildwood residents to oppose the proposed store’s location. Commissioners spent more than an hour hearing from citizens for and against a new Dollar General.

In the end, the board voted to grant the special exception, allowing D G Holdings to operate a commercial business on land zoned agricultural. The company did not seek to  have the zoning changed, no doubt anticipating pushback from the board, which loses most control of land’s use once its rezoned as industrial.

Rather, the board said Dollar General may operate at the location as far as Panola County is concerned. However, an appeal of the commissioners’ decision has already been filed with the Board of Supervisors, who are expected to hear the matter at their second meeting of next month on March 8 at the Batesville Courthouse.

Wildwood residents stressed the traffic problems already at the entrance to their subdivision and told the board they expected many deadly accidents if Dollar General opens across the highway.

Realtor Bobby Reed and landowner Fred Womble were the only speakers for the special exception, and assured the board the design of the proposed building would be consistent with the chain’s newest architectural choices.

Those not wanting a new store near their neighborhood also said Dollar General has too many stores in the area now (one just a few minutes east on Hwy. 6) and the customers who shop Dollar General might be tempted to cross the highway and come into Wildwood, increasing the likelihood of mischief.

The response was that Wildwood residents are selfish and don’t want any type of business on the south side on Hwy. 6 near their subdivision. They noted that those same opposers in recent years have killed attempts from others to build storage buildings for a bread distributor and a location for the medical evacuation helicopter business that eventually built near the hospital.

The residents said for a few thousand dollars more the Dollar General investor could purchase better lots on Hwy. 6 that would be more accessible to shoppers, and much safer for people who own homes on roads just off the busy highway.

Wildwood residents could have purchased the lot anytime in the past couple of decades to preserve the integrity of the subdivision was the rebuttal.

Some 38 of 39 households in Wildwood were represented on a petition against the special exception with the lone holdout being the household of Joe Azar, the chief economic developer for both Panola County and the City of Batesville.

Azar, visibly anguished, told the commissioners that his professional job dictated that he do everything possible to attract new business, and their jobs, to the county. In that role, Azar said he was very pleased with Dollar General as a company and prospective employer for the county.

As a parent, Azar said, he was bound to oppose the location of the Dollar General, saying he daily experiences the difficulties of entering or leaving the subdivision with interstate-speed traffic coming into Batesville.

In other Land Commission news,