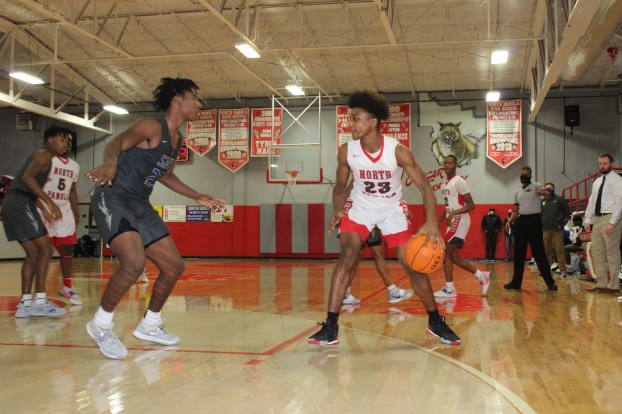 There is something special about high school basketball on Saturday nights at the Charles McClelland Gymnasium in Sardis, otherwise known as the Cougar Den.

While there have been countless more thrilling games in the past, the latest installment between North Panola and district foe Senatobia was just as exciting on Friday, Jan. 22.

Trailing 60-53 with 4:34 remaining in the game, the Cougars turned up the defensive pressure that resulted in a 9-1 run that capped off a 64-61 come-from behind victory

The win was payback following the Warriors 60-42 win over North Panola Friday in Senatobia. The Cougars even its record at 8-8 (3-3 in district) while Senatobia dropped to 6-3 in district and 7-7 overall.

“I just felt like we didn’t play with a lot of energy  last night (Friday). We were down by six going into the fourth quarter and lost by 18 so our effort wasn’t where it need to be,” said Cougar head coach Caleb Vaughan.

“We got behind tonight late in the game, but made plays at key times and had some guys hit some big shots when we needed them. There is still a long way to go with four district games left,but this was a big win tonight,” said Vaughan.

North Panola tied the game at 60-60 at the 2:50 mark as Carl Robinson swished a three pointer from the corner. Less than a minute later, Robinson’s put back of his own miss gave the Cougars a 62-61 advantage.

Then with under a minute remaining, Deundre Smith’s basket extended North Panola’s lead to 64-61. After both teams exchanged turnovers,Senatobia called a timeout with 12 seconds left to set up a potential game-tying shot, but could not convert after turning the ball over.

North Panola forced 21 Warrior turnovers on the night while committing 17 of their own.

Senatobia led 14-8 after one quarter and 34-31 at the half as the second quarter saw five lead changes.Marcus James paced North Panola with 16 points while Robinson followed with 15.Tony Davis chipped in with ten as Dee Brown and Ja’Kyrey Harrell added six points each.

Smith and Ja’qwan Gale rounded out the scoring with four points.

North Panola prevailed in the Junior Varsity game 53-36. The varsity girls game was postponed due to COVID-19 related issues. The Cougars were scheduled to host Byhalia Tuesday, Jan. 26, before traveling to Water Valley Saturday.