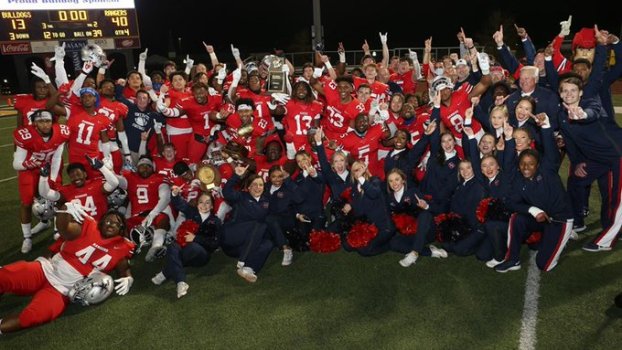 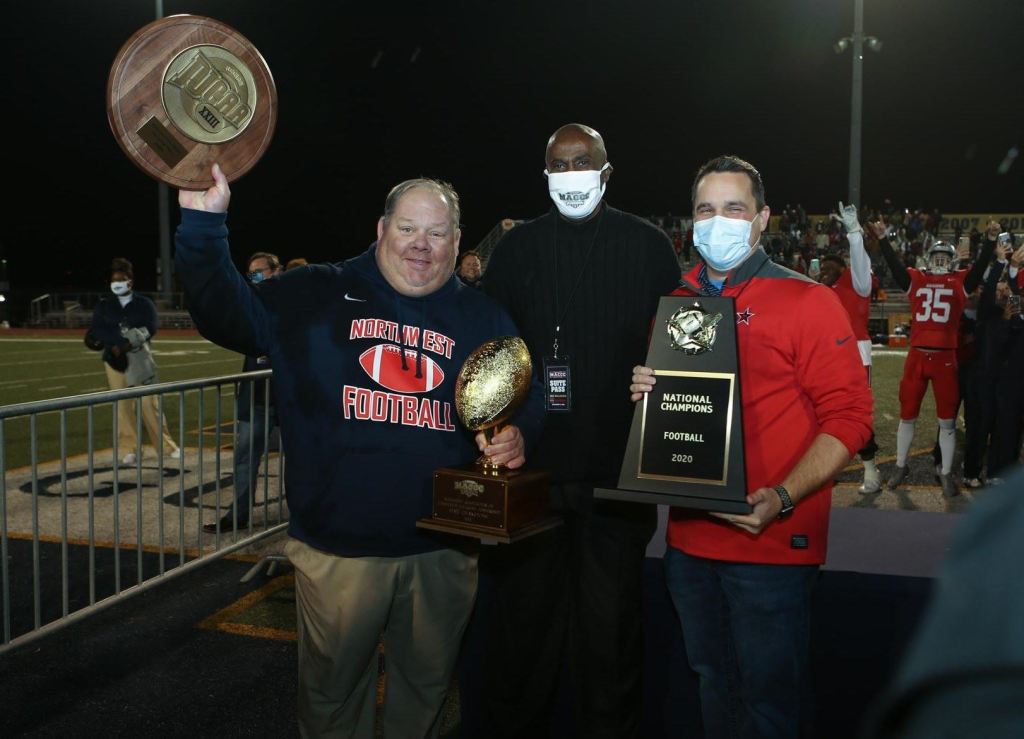 With a 40-13 victory at Mississippi Gulf Coast, the Rangers brought home, not one, but two trophies for winning MACCC and National Community College Football Championship titles, granting Northwest its fourth national championship and its 10th conference title.

“It feels great,” Northwest coach Benjy Parker said. “Everybody in our league had ups and downs with COVID-19, but our entire conference deserves a pat on the back for battling and making it through the season. I’m just proud of our team for getting this win.”

From the opening snap, Northwest set the tone on defense as the Rangers swarmed the Bulldogs early and often, shutting down a usually-prolific Mississippi Gulf Coast offense for most of the first half.

Although the Bulldogs’ staunch defensive front gave the Rangers fits early on, Northwest finally got on the board with 4:48 left in the first quarter as Tucker Barefoot nailed a 24-yard field goal to cap off a five-play, 27-yard drive.

After the Rangers’ defense once again forced another three-and-out from the Bulldogs, Northwest began a seven-play, 36-yard drive that spilled over into the second quarter. Once again, it was Barefoot capping off the possession with a 22-yard field goal that extended the lead to 6-0.

Mississippi Gulf Coast tried to get the gears going on its next offensive possession, but the Rangers’ defense had other ideas as Nijel McGriff laid a hit on Bulldogs’ quarterback Phillip Short that resulted in a fumble recovery by Jaylon Webb. Even though Northwest failed to take advantage of the turnover, the defense stepped up yet again as a fourth down sack by Rod Daniels allowed the Rangers another shot to stretch its lead with eight minutes left in the first half.

Starting with great field position at midfield, Northwest marched down to the Bulldogs’ 25-yard line on seven plays over the next three minutes and change. Despite being unable to reach the end zone, Barefoot delivered once again, this time with a career-long 43-yard kick that extended the Rangers’ lead to 9-0.

Mississippi Gulf Coast failed to get the gears turning on the ensuing offensive possession and after a combined sack from Daniels and Desmyn Baker, the Bulldogs were once again forced to punt at their own 25-yard line. Five plays later, the Rangers finally hit the end zone with a 12-yard touchdown pass from Michael Hiers to E. Jai Mason, stretching the lead to 16-0 with less than 30 seconds left in the first half.

With less than 10 seconds to work with, the Bulldogs gave the Rangers a scare with a solid 55-yard pass from Short to Jymetre Hester that seemed destined for a Mississippi Gulf Coast touchdown. However, Byron “Tank” Pearson saved the day by punching out the ball as Hester reached the goal line, resulting in a fumble in the end zone for a touchback as time expired. After some discussion from the officials, the call stood and allowed the Rangers to hold the 16-0 advantage into halftime.

Regardless of the call, Mississippi Gulf Coast stormed out of the second half with some added momentum on offense, embarking on a six-play, 65-yard drive on the opening possession. The Bulldogs would finally get on the scoreboard less than three minutes into the third quarter, as a 55-yard reception by Hester set up a short touchdown carry on the next play from Senatobia native Deondre House, cutting the Rangers’ lead to 16-6.

After a pair of empty-handed possessions from both teams, the Rangers caught a break after MGCCC’s Caden Davis was forced to punt from the Bulldogs’ own end zone, setting Northwest up on the 41-yard line. The Rangers marched down inside the 20-yard line on seven plays, capping off the drive with a 35-yard field goal from Barefoot to make it a 19-6 lead with three minutes remaining in the third quarter.

Mississippi Gulf Coast closed out the quarter by crossing midfield and advancing the ball to the Rangers’ 29-yard line early in the fourth quarter. A holding penalty pushed the Bulldogs back to the 39-yard line and the next play proved to be costly as Short was hit by Micheal Campbell, resulting in a fumble and a 50-yard scoop and score from Jykeveous Hibbler that made it a comfortable 26-9 advantage for Northwest.

Although the stunned Bulldogs seemed to be on the brink of a rare home loss, Mississippi Gulf Coast wasn’t giving up that easily. After Short completed a pair of big passes to Hester and Jalen Bracey, House would break free for a 41-yard touchdown on the next play, pulling his team back within a 26-13 margin with 12:31 remaining in regulation.

It didn’t take long for Northwest to respond on the next drive, as Keyon Fordham’s 20-yard kickoff return set up the Rangers near midfield. Five plays later, Jaquerrious Williams hit the end zone and the Northwest record books with his 20th career rushing touchdown, tying Kevin Perkins (2017-18) and James Puckett (1990-91) for fifth most rushing touchdowns in program history. The 21-yard score also made it a 33-13 lead for the Rangers with just under 10 minutes left in the contest.

Perhaps the most electrifying play of the evening came on the next possession, as Mississippi Gulf Coast reached the Rangers’ 27-yard line in just three plays, looking for another touchdown. That’s when Pearson made another career-defining play, picking off Short for a 70-yard interception return and the final blow from Northwest, pushing the lead to an insurmountable 40-13 advantage.

Mississippi Gulf Coast would get the ball back with eight minutes left, but the Bulldogs went nowhere on their next drive and the Rangers would take over from their own 40-yard line to burn the clock. Five straight carries from Williams eventually set up a first down with less than two minutes to go, as Northwest moved into victory formation.

Mississippi Gulf Coast did win the battle of total offense, finishing with 408 yards compared to 298 from Northwest, but the Rangers made plays when they needed it most. Hiers finished 16-of-29 for 213 yards, a touchdown and no interceptions to lead the Rangers’ offense, along with 109 yards and a touchdown on 24 carries from Williams.

Baker led a strong defensive effort for Northwest with eight tackles, followed by seven from Kylan Robinson and six from Jarvis Townsend.

Northwest also delivered a clutch effort in all aspects of special teams, led by a 4-for-4 night on field goal attempts from Barefoot. Gillis also delivered a season-best performance with 256 yards on seven punts, including four that pinned Mississippi Gulf Coast inside its 20-yard line.

After the game, the Rangers were presented with another MACCC Coach of the Year award for Parker and the MACCC Championship trophy. Also, in a move that was announced just days before the contest, Northwest was also awarded with the National Community College Football Championship trophy, which will go down as a national title for the fall season, as other NJCAA conferences are slated to participate in an abbreviated spring season pending future COVID-19 guidelines.

Both honors are the first for Parker since taking over as head coach in 2016. Parker previously helped Northwest to a national championship in 2015 as the Rangers’ defensive coordinator.

Northwest concluded the 2020 season at 6-0 overall, marking the program’s first undefeated season since 2000 (10-0) and only the fourth all-time.

The Mississippi State Department of Health regularly updates its website with results of a variety of inspections conducted by the... read more