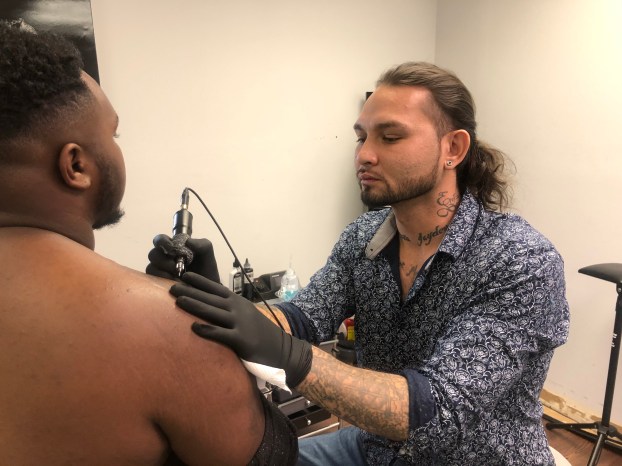 Jimmy Daugherty applies a tattoo to a customer. (Rebecca Alexander)

Residents of Panola County looking to get tattooed no longer have to drive to Oxford, Grenada or Memphis.

Early this fall, 11:11 Ink Gallery opened its doors to the public, and in mid-October became a fully-licensed operation at its 588 Hwy. 51 location, across the street from the Bull Market.

Panola County native Crystal Dawn teamed up with longtime friend and master tattoo artist, Jimmy Daugherty, to bring something to the community that Dawn felt had been missing.

Dawn, a Batesville native who attended South Panola HS but graduated from Delta Academy in Marks, returned from Texas where she had lived for seven years. She felt strongly about giving something to the community where she had grown up.

After a bad vehicle wreck in 2019, she decided to put her energy into her own business. Discussing the possibility with Daugherty – who she now calls her collaborative business partner, adviser and mentor – the seeds became sown, during a visit with him to work on one of her own tattoos.

“His art always resonates with me, on a different level,” said Dawn. From there, the two began collaborating, and by this past Halloween their business idea was a reality.

The 38 year-old business owner said that nearly 20 years ago, when Batesville had its first tattoo shop, that she would go in and help out – although by the time she graduated from nursing school the business had sold. “I think that became the undoing of tattoo shops here in Panola County,” said Dawn.

While discussing possible names for their future shop, evidently the clock caught Dawn and Daugherty’s attention, as it displayed that the time was 11:11.

“It was our positive manifestation,” she said, “and that’s what 11:11 represents. Us bringing two different sides of art, vision, and style.”

Dawn said that while her partner’s style leans towards urban, her own lends more to a country setting. “We just have two different views, and I think it works well, balances out and really represents who we are.”

It is significant that the company slogan printed on the storefront encouragingly reads: “Trusting who we are,” since it was a long and difficult process bringing the shop to completion.

“I didn’t really tell very many people, because I didn’t want them to say it couldn’t happen,” said Dawn. “It had been a while since Batesville and Panola County had a tattoo shop, or had probably even considered having one.”

Of course she had to go through the City of Batesville to get approval, so in the meantime was forced to sit idly on the property for some months.

When she presented her business plan to the Board of Aldermen, she insisted it was a “time to move forward,” and that in light of all the abundant competition, that money was going out of the county, instead of coming in. She told them that she believed it was a good thing they could bring to the community.

“I didn’t even tell my mom and my dad until after I had gotten a ‘yes’ from the city,” she said. 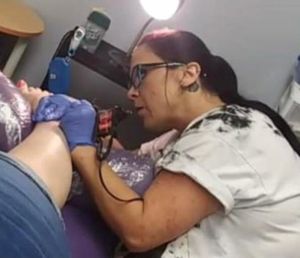 One of her goals is to break the taboo about what a tattoo business represents, and that in time she intends to incorporate a bigger emphasis of art education into the business.

Laid out in what she calls her five-year plan, Dawn wants to open up an academic arts school in the approximately 1,500 square-foot space, and hold after school arts programs for both parents and kids.

“That’s what I really want to use this business as – to give back to the community and have the youth involved.”

The grand opening had been set for Nov. 11 – coinciding with the numerological aspect of the shop’s name – but it was put on hold, mainly due to restrictions caused by the Covid-19 pandemic.

According to Dawn, the event is likely to occur sometime between Thanksgiving and Christmas, although nothing yet has been set in stone.

A working nurse since 2004, and also a licensed massage therapist, Dawn spent a majority of her career in health and wellness, and considers what she’s doing now to be the opposite of what she’s used to. “It’s been a very big learning process, for myself,” she said. “I had never really given any thought to making a career out of it.”

Apart from providing world class tattoo work, the shop also serves as an art broker, and displays and sells work from local artists, including from the youth community.

“There’s nothing typical about our shop,” said Dawn, “and that’s what I appreciate about it – being so diverse. To be the shop owner as a female, is very rare too, so it’s a lot of new things that we’re doing”

Among the tattoo services the team provides are cover-ups, completions, add-ons, and custom art designs.

Although she strongly urges calling for an appointment, walk-ins are accepted for an in-person consultation.

In Panola County in the past week 96 new cases of positive coronavirus were reported. The Mississippi State Department of... read more