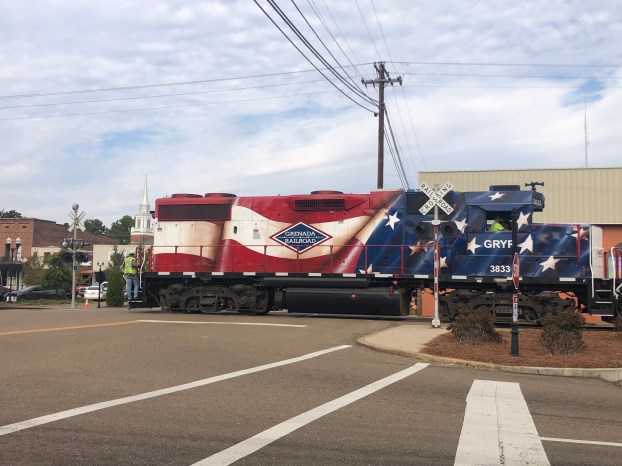 A $6.22-million federal transportation grant will provide the funds to complete the final phase of refurbishment along the Grenada Railroad between Canton and Memphis.

Railroad workers spent two days working on the part of the track that runs through Batesville and Panola County last week, replacing worn ties and doing general improvements that will give the railroad capability to carry heavier trains at faster speeds.

Once completed, the line will be able to consolidate full-speed freight service, providing a vital link between the region’s centers of commerce and the rest of the U.S. economy.

“The ability to move freight faster lowers the rates and makes our industries more competitive,” said Joe Azar, CEO of the Panola Partnership, which has worked to secure funding for the railroad during its recent troubled financial years.

“This also makes our line more attractive to Class 1 rail companies. Soon you will be seeing Nissan parts headed south and vehicles returning north to one of the world’s busiest intermodal yards in Memphis. With this additional speed, there is also a responsibility to increase safety,” said Azar, who is already exploring ways to pay for the installation of safety crossing arms for Batesville’s Square crossings.

The rail line once accommodated freight and passenger train travel between Chicago and New Orleans. But after Amtrack moved its passenger service to another line, the railway fell into some disrepair and train speeds were reduced leading to congestion and delays.

Since 2017, the railroad’s owners, Grenada Railroad LLC, a subsidiary of RailUSA, has secured $13.68 million in federal funding for railroad improvements.

Mississippi’s U.S. Senators Roger Wicker and Cindy Hyde-Smith announced the grant last month in a joint press release. The pair wrote letters of support for the grant and praised restoration of the line as a vital economic development asset.

“This grant is a major step forward for Mississippi,” Wicker was quoted as saying in the release, “After years of neglect, the Grenada Railroad will once again provide a strong rail link between our state’s centers of commerce and the rest of the U.S. I was glad to support this project, which I expect will promote economic development, create jobs, and improve safety for our residents.

“This is more good news for the revitalization of a rail line that faced extinction not too long ago. Federal grant funds, combined with non federal resources, will support additional safety and infrastructure improvements to the Grenada Railroad. This extensive work will allow the rail line to continue boosting economic vitality across the region,” Hyde-Smith said.

According to railroad officials, the Consolidated Rail Infrastructure and Safety Improvements grant will mostly be spent on the line between Grenada and South Haven. The funds will pay for the tamping and regulating of track, the installation of more than 30,000 railroad ties along 88 miles, including the installation of crossties in 84 curves, and rehabilitation of 25 bridges.

It will also fund the improvement of 11 bridges and track conditions along the Water Valley Spur Line and repair three tracks in the Durant rail yard, and construct a pit for employees working under the locomotives.

“This funding will allow us to get our railroad into better shape than it has been in a long time while we focus on safely handling the region’s freight in the future,” said Trevor Costilow, Grenada Railroad general manager.

“We will be able to achieve our goal of completing our entire mainline including all bridges. The result will be our ability to remove the weight and speed restrictions we currently operate under in some areas and move industry standard 286,000-pound gross weight on rail traffic at speeds of 25 miles per hour.”

Grenada Railroad LLC will provide a $4.97 million match to the grant in order to complete the $12.7 million dollar project.

Officials report that approximately 90 percent of the work under a previous $7.46 million Infrastructure for Rebuilding America Grant (INFRA) to work on a 90-mile stretch of the southern end of the line between Grenada and Canton is nearly complete, with the remaining works scheduled to be completed by the end of October. This portion of track, once slated to be abandoned, is now able to accommodate full speed rail traffic.

Contracts have also been let for crosstie work on the northern end of the railroad, work that is being paid with a $519,000 State of Mississippi Rail Improvements Grant.

When the work between Grenada and Southaven is completed, the line will be able to accommodate rail traffic traveling at 40-miles-per-hour from Memphis to Canton.

Return of bingo good for volunteer firefighters of Panola

Sardis Lower Lake Fire Department has resumed bingo games at the station on Hwy. 35. Doors are opened at 5... read more