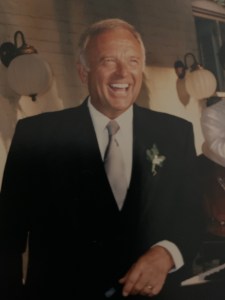 At a young age his family moved to Corydon, Kent., where he graduated from Corydon High in 1952. He then attended the University of Kentucky, graduating in 1958 with a Bachelor of Science Degree in Commerce. While at UK he was a member of the Kappa Sigma fraternity and the Air Force ROTC program.

He lived in Montgomery, Ala., for approximately 60 years where he and his wife Nancy were members of Saint John’s Episcopal Church.

Ron was Executive Vice President of Turner Insurance & Bonding Company in Montgomery for over 40 years. In addition, he was the Associate State President for the Associated General Contractors, the largest group that represents the commercial vertical construction industry in the state of Alabama.

Ron was also a member of and held numerous committee offices with the Alabama Road Builder Association and the Alabama Asphalt Pavement Association. He and Nancy attended the state conventions held every summer. These associations worked with the highway industry and the Alabama Department of Transportation, where he had many friends.

Ron was active in the Montgomery Kiwanis Club and loved playing golf at the Montgomery Country Club. He was also an avid fisherman, taking numerous groups over a 15-year span to Canada fishing for smallmouth bass. He also led fishing expeditions one hour south of Santiago, Chile, fishing for rainbow trout and brown trout with fly rods. On these trips he was always a consummate storyteller of the University of Kentucky basketball program.

Furthermore, when the Thompson family opened a professional horse track in Birmingham, Alabama, Ron was ready to participate, racing his thoroughbred horses at the Birmingham track.

Mr. Forester spent the last twenty three  summers in Highlands, North Carolina, a place true and dear to his heart. He lived in and was a member of the Highlands Falls Country Club community where he had many friends. He loved the entire staff, considering them his extended family. Ron loved the area and had many wonderful times there playing golf, fly fishing and playing bridge with some of his closest friends. He served on the Chestnut Cove Board, enjoyed teaching fly fishing at summer camps, and helped stock the ponds.

He is survived by his beloved wife of 60 years, Nancy Lee Smoot Forester, and his four children including Mark Stanton and Lori Watkins Forester of Sumter, S.C.; Neal Hagood and Elizabeth “Beth” Anne Forester Acker of Highlands, N.C.; Kevin and Cathleen “Cricket” Boyd Forester Nowlin of Fairhope, Ala.; and Thomas William and Sharon Lee Forester Hodge of Batesville.

He is also survived by his sister Mary Edith Forester Pritchett of Henderson, Kent., and sister-in-law Donna Reidel Forester of Nashville. He was preceded in death by his brother William “Bill” Stanton Forester, his brother-in-law Aaron Gregory “A.G.” Pritchett, and his brother-in-law Charles Boyd Smoot, Jr.

He will be buried at Fairmont Cemetery in Henderson, Kent., at a later date to be determined.

Two charitable organizations that were very important to Mr. Forester are listed below.  In lieu of flowers, contributions may be made to the following:

Gifts can be made online at: https://uky.networkforgood.com/ – enter the name of the fund in the search box.

Or mail to: UK Office of Gifts Receiving

Alice Lloyd College’s mission is to make education available to qualified mountain students regardless of their financial situation, offering a high-quality academic program emphasizing the liberal arts; promoting work ethic through a self-help Student Work Program in which all full-time students participate; and providing an atmosphere in which Christian values are maintained, encouraging high personal standards and the development of character.