Special gun with Trump’s signature up for raffle 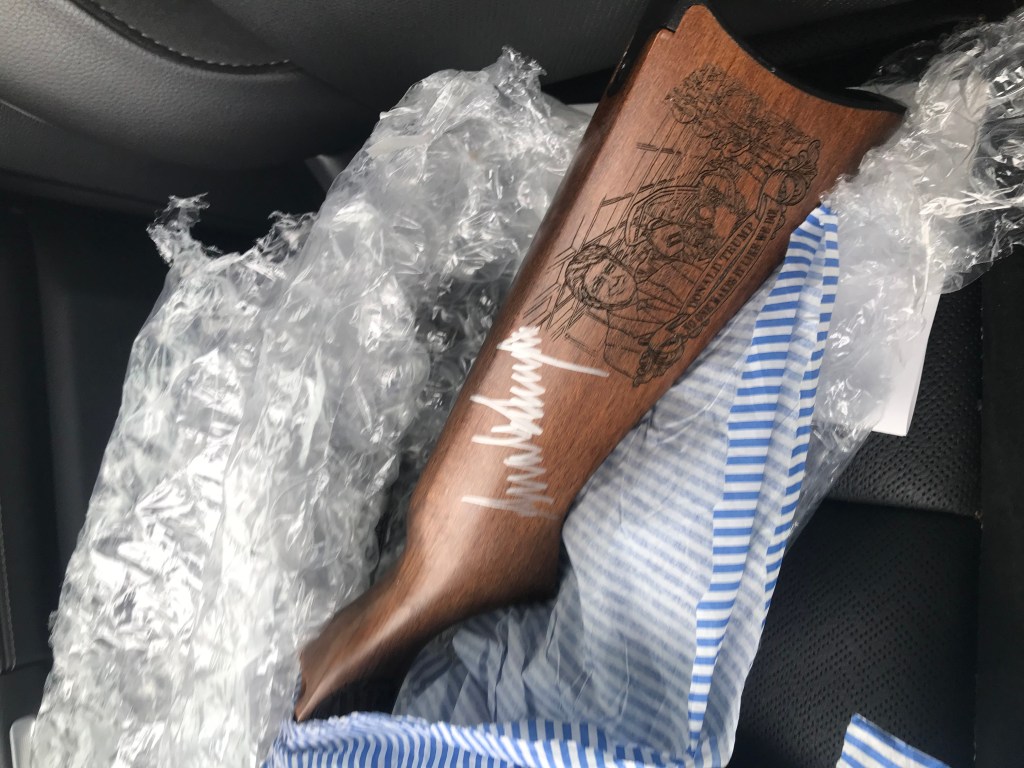 $19,875. That is the amount of money Mike and I took to the Wahabi Temple in Jackson this past Saturday from our Shriner 100 Gun Raffle sales.

To say the least, those Shriners were ecstatic to see us. When they began to heap praise on us, we reminded them that we are only the ticket takers and that the great, generous people of our community deserved all the praise, not us.

Thank y’all for supporting the Shriners Gun Raffle every year. It makes us proud to take a sack full of money down there from Batesville and Panola Countyl.

Myself, I like him. He is unlike any politician I have ever seen, most likely because he is not a politician. He is a businessman.

One of his best qualities in my eyes is that he is not a war monger. A good businessman knows that wars cost too much. Lives being the most important loss, but also wars costs trillions of dollars that could be better spent helping Americans and taking care of our infrastructure.

I also enjoy the way he just dismisses the old run of the mill lifetime politicians who have been in office for decades and just living high on the American people’s back.

There are some who will argue this, that or the other, but I prefer to keep things simple. Avoiding lost American civilian and American soldiers lives is a high priority to me.

So, on with my story.

I bought this Ruger 10-22 Donald Trump Edition rifle last year for Civitan Radio Day. It is a beautiful gun with carvings in the stock and forearm. It has The President’s image engraved on the stock along with other engravings on the forearm. I wrote in this paper last year telling of the raffle of this gun we were holding to benefit our local club.

We sold $3,500 of tickets on it and Civitan member and Panola County Attorney C. Gaines Baker’s ticket was drawn and thus he won the gun.

Now Gaines, being a schoolmate, a lifelong friend of mine, a Civitan and a pretty good fellow on certain days (as we all are) was kind and generous enough to donate the gun back to the Civitan Club for a future raffle.

I had an idea for the gun, a new twist so to speak. I believed I knew how to make this gun even more desirable all simply in the spirit of helping the Civitans raise a few more dollars to help a few more folks around here.

My cousin Burney Howe grew up here and has lived in Pontotoc for the past couple decades. You should remember Burney from the article I penned about his Mother, my late Aunt Irene Howe. His Dad was Aubrey “Horsefly” Howe who spent his life working for the Batesville Police Dept.

Burney’s neighbor in Pontotoc is Judge Wicker, the father of U.S. Senator Roger Wicker. Burney is great friends with the Wicker family, especially Judge Wicker. He always has some tale to relate to me about him and the 95 year old Judge’s exploits.

I asked Burney last year to ask the Judge if he thought it was possible that Senator Roger Wicker could convince President Trump to sign the stock of the gun.

Judge Wicker, according to Burney, being a truly optimistic individual, did not see a conflict in attempting such a feat. He passed the idea to Senator Wicker and the Senator agreed he would put forth his best effort to secure the signature.

I took the gun to Batesville Gun and Pawn and had it taken apart. It would be easier in my opinion for the Senator to take a gun stock to the White House.

In June I took a ride to Pontotoc and delivered the gunstock to Burney. Senator Wicker came home for July 4th and Burney handed it off to him.

A couple of weeks ago I called Burney to get an update on the process reminding him that I wanted to get started on this project as soon as the Shriners raffle was done.

Burney called me back the next day to inform me that the White House attorneys we’re not thrilled at all with our Civitan Radio Day item, but assured me that Senator Wicker was adamant about the fact of getting our gunstock into the hands of  White House Chief of Staff Mark Meadows and the decision of taking it to the President to sign was going as high as it could possibly attain.

Burney called me around 11 a.m. last Tuesday to tell me that the President, Our President, the most powerful man on the face of this Earth, took a few minutes of his time and was absolutely thrilled to sign that gunstock for the Batesville Civitan Club’s Annual Radio Day!

The stock was sent overnight from The U.S. Senate to Burney’s home in Pontotoc. About 23 hours later this past Wednesday it was sitting on the passenger seat of my Hemi Ram heading to Batesville.

Mike Moore at M&M Auto Glass is currently building a glass display case for the gun. The UPS Store has printed tickets for us to sell for the raffle.

There is no telling what the value of this gun is because I don’t think a sitting, or non-sitting President, has ever signed a gunstock before now.

We could have most likely searched for buyers to bid on the rifle and probably made a good chunk of money off it. We chose a different avenue.

The tickets will be inexpensively priced at $10 each and the gun will be given away live on air Nov. 7 on www.undefinedradio.com and Q105.5 FM from our downtown Civitan building.

We want everyone to have a chance of winning this priceless piece of American history.

Ain’t it amazing what two old boys from Batesville, one who grew up on Tubbs Road and the other grew up on Draper Street can get accomplished when they put their heads together? Just the conversations we have had about it along the way have been laughter filled. It sure has been a fun ride so far with this thing.

Take care of yourself folks and get you a ticket on this priceless gun. One lucky person will take this gun to their home on Nov. 7.

Write to Ricky at rickyswindle@bellsouth.net