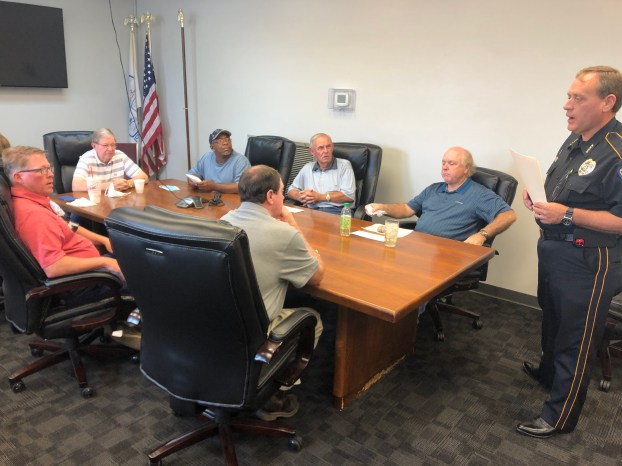 In a special called meeting of the Mayor and Board of Aldermen held Friday morning at City Hall, Batesville Police Chief Jimmy McCloud told city officials he is retiring to begin a new career with a national public service training company that provides continuing education courses and programs for police departments, security companies, prison systems, and many general law enforcement organizations.

McCloud, 49, spent part of Thursday afternoon preparing remarks for an early morning meeting with the whole department when he told officers and staff about his decision to announce his retirement. He asked Mayor Jerry Autrey to call a 10 a.m. meeting of the city council, telling them there was a personnel matter to discuss.

“It will be emotional I’m sure, but I’m confident this department can carry right on and that’s what I’m going to tell them,” McCloud said in an interview shortly after asking the mayor to call the meeting. “I’m going to remind our guys that we’ve spent many years getting this department to this point and that they need to stay on course.”

“In our meetings lots of times the central topic is about drifting, and how not to let yourself drift. That’s what I’m going to remind them, not to drift, because it’s easy to do,” the 27-year BPD officer said. “The hard thing is to keep your eyes on your goals and not to drift. That’s what I want to leave each of these officers with.”

Board members were stunned at the announcement, and had little to say for several minutes as the retiring chief explained his reasons for retiring. They thanked him for his service, with several members curious about his future plans.

“I know I speak for the whole board when I say we thank you for your service and I think it’s been nothing for positive for the people of Batesville,” said Alderman Bill Duggar.

McCloud said he began to pray about a year ago for direction, and guidance about changing careers. “The Lord just put all the pieces together. I would have been perfectly happy to work out my career right here because I love my job and serving the people of Batesville, but when the pieces began falling together I knew it was the Lord working in my life and I know this is the right thing at this point.”

“A buddy told me one time that it’s a lot better to leave a job and make a few people sad versus leaving a job and making a lot of people glad,” he said. “So I guess there is something about staying on a job too long. If I wasn’t convinced this department will move right along then I wouldn’t have even considered this offer.”

McCloud told board members Friday he plans to work through November and will assume his duties as the Mississippi state representative for Virtual Academy, a company that supports public service agencies with a variety of training and instructional videos, as well as conferences and forums designed to keep offices and administration abreast of latest procedures and best practices.

McCloud said a fellow classmate from his 2003 FBI National Academy class held in Quantico, Va., contacted him about the position several months ago. After several conversations and meetings with company officials, he began to seriously consider a career change and made a final decision earlier this week.

“While I was praying about this and thinking about this everything in my life seemed to point toward time to make a change. I got in my truck one day last week and the devotional book I keep on the seat was turned to a page about taking a leap of faith,” McCloud said. “I had almost made up my mind completely and then Wednesday night Bro. Tommy (Snyder) preached about Noah and how he took a leap of faith to build the ark. It seemed to me the signs were all there.”

McCloud, who was raised in Batesville and graduated South Panola High School, began his law enforcement career as a 22-year-old rookie patrolman, hired by Chief Roger Vanlandingham in the same office he now occupies.

He was promoted through the ranks in the 80s and 90s and became a captain in 2004. He was made deputy chief in 2015 and was on a mission trip with fellow officers from across the country in 2017 when he received word that then-Police Chief Tony Jones had resigned. A few days after his return home city aldermen voted to make him chief of the department.

He graduated from the FBI Academy in 2003 and was elected to the FBI’s State Chapter Board in 2010, serving as president from 2013-15. He continued his FBI leadership classes at the FBI Academy and at the University of Virginia’s Darden School of Business in Charlottesville.

He and his wife Bessie have been married 25 years and they are active in local Baptist Churches. He was ordained a deacon at Sardis Lake Baptist Church in 2008. He also serves as a member of the board of directors for The Grace Place, the Christian benevolence center and youth ministry outreach on Petit St. in Batesville.

An avid deer hunter, McCloud enjoys the outdoors, often retreating to local woods to regroup and bring stillness to a hectic schedule with the pressures of public service.

“One of the questions the national director of Virtual Academy asked me was how I would handle the transition from being the boss to a regular employee and I couldn’t help but laugh,” he said. “I told him that right now I go to sleep every night with 58 people on my mind and I think it will be a relief to lay down and have just one, myself, to worry about for a while.”

Reflecting on the changes in law enforcement and advancements in the local department, McCloud noted that when he began his career Batesville Police personnel, including all clerical and dispatch workers, numbered about 24 with just a few cars. “There were no cell phones and patrolman had a little pocket tape recorder we carried around. If you were lucky you had a walkie-talkie,” he said. “I can remember the days when a dispatcher, if they were looking for you, would call the house phone of the last address you were reported working at just to get in touch with you.”

Now the department has more than 40 sworn officers, two K-9 dogs, and 30 vehicles. The station was remodeled in 2018, including a complete upgrade of the dispatching and communications infrastructure and modern office space for investigators.

There have been high points and low days, also. McCloud’s career has included tragedies – officers shot, a fellow patrolman’s suicide, and the death of Constable Raye Hawkins almost a year ago. Hawkins’ son, Officer Wesley Hawkins works for McCloud and is part of a department management team that meets each Monday to discuss the weekend and coming week. “That hurt us deeply, but it always does when we have a loss in law enforcement no matter what department. We’re all family in law enforcement.”

McCloud said his best achievements in the Batesville Department include the many initiatives undertaken to increase police visibility and building positive relationships with citizens resulting in a more community-oriented police force.

His Coffee and Conversation quarterly meetings designed to give the general public access to officers for questions and answer sessions, and the annual Picnic With Police events have been popular with citizens and have formed bonds between officers and the general public that have resulted in more proactive policing with the support of citizens.

McCloud said he will participate in the city board’s process of selecting a new chief, but said his advice to aldermen will be to promote Deputy Chief Kerry Pittman, allowing the management team currently in place to continue unabated.

“Chief Deputy Pittman is the best choice for this position at this time and that’s what I will tell the board. This is a six million dollar budget and he and the other officers I’ve been training are fully capable of keeping this department marching right along without a hitch,” he said. “In my mind they shouldn’t consider anybody else.”

For McCloud, the new career is an opportunity to share his faith with others, and continue his passion for reaching children and young people with positive influences before many of life’s bad choices are presented.

“I spent the first twenty years or so of my career putting people in jail, and I’ve spent the latter part trying to keep people out of jail. It’s a different mindset and approach to police work. Not everybody needs a ticket and not everybody needs to go to jail, sometimes they just need somebody to help them get back on track, and that’s been the enjoyable part when I found that it is such a blessing to serve people,” McCloud said.

“I’m not stopping my service, I’m just going to be on a different avenue,” he said.