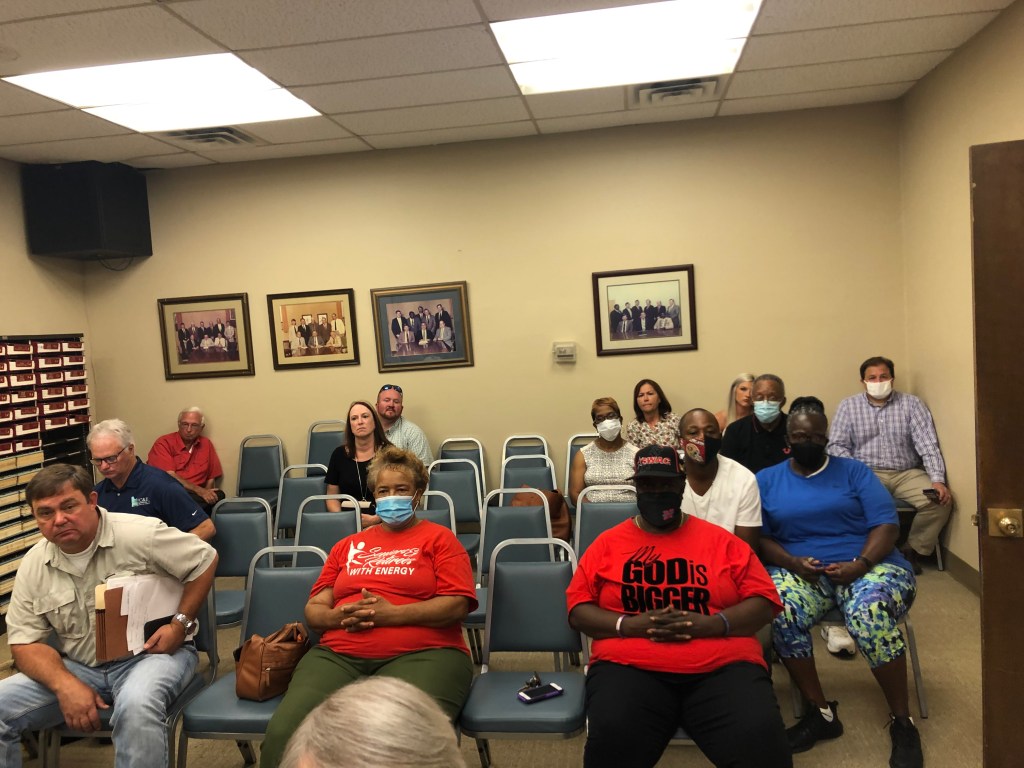 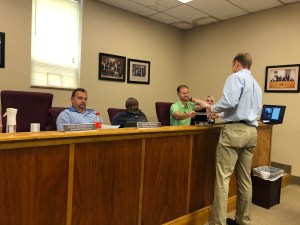 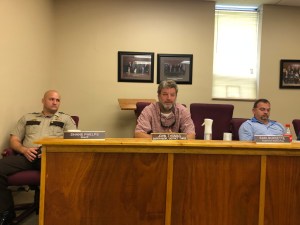 At the July 6 meeting of the Panola County Board of Supervisors, about half the citizens in the boardroom wore masks, and one supervisor, Earl Burdette, had a face covering. He left the meeting before these photos were taken.

Controversial subjects and heated complaints at the Board of Supervisors’ meeting are not rare and generally involve garbage bills or road/bridge conditions. Masks will likely be added to that list, possibly as early as Monday’s meeting at the Batesville Courthouse.

The first mention of a board order requiring Panola County citizens to wear masks in public places was brief – just one minute by Emergency Management director Daniel Cole during his regular report at the July 6 meeting at the Sardis Courthouse.

“I’ve been approached by several citizens from throughout the county wanting to know if we were going to require people to wear masks, and it’s very unpopular to talk about, but I told them I would bring it before you today,” Cole said.

“That’s a super unpopular topic amongst a lot of people, but I’m just asking you to start thinking about it,” he said.

Cole’s suggestion that board members begin formulating a policy to address the inevitable decision of a mask order was met with a couple of muttered comments by supervisors and an indication they had no intention of talking about the subject at the time.

Panola County’s EMA office has taken no public position on whether masks should be required here. Some cities, Oxford the nearest, have masks ordinances, but none has been brought up by the supervisors or the Batesville aldermen.

As the county’s EMA head, Cole consistently advises other county officials to stress the importance of hand washing, social distancing, and general adherence to CDC guidelines in the effort to minimize the effects of the coronavirus and the pandemic at the local level.

The idea of requiring citizens to wear masks grew closer to Batesville and it’s supporting towns this week when Gov. Tate Reeves issued a state executive order declaring that masks must be worn in public settings and restricting the size of gatherings in several counties, including DeSoto, Grenada, and Quitman.  In addition, the mandates limit social gatherings to 10 people indoors and 20 outdoors.

Former state Rep. Robert Foster, who lost a bid for the Republican nomination to Reeves in last year’s gubernatorial race, made state headlines Saturday when he posted a statement of defiance to the Governor’s order, saying he will not wear a mask until he chooses and will not require customers at his DeSoto County business, Cedar Hill Farms, to follow the state order.

Should be Governor expand his order to include Panola, or if state health officials mention the county for inclusion with the other counties that have seen increases in COVID-19 infections, the matter will surely produce more discussion than supervisors were willing to initiate at Cole’s update.

Saturday’s update from the State Dept. of Health showed Panola County has registered 448 positive cases of the virus. Those numbers are from data gathered through Friday (July 10) at 6 p.m. Statewide, 35,419 people have tested positive since March 11, and 1,230 have died.

Since state health officials begin pushing for citizens to voluntarily wear face coverings when in public places or around others, even if social distancing, the Panola County EMA office has received and helped distribute several thousand washable masks.

Cole reported last week that every person in Panola that wants a mask can have one, and he has more than enough to cover the 35,000 residents of the county. His office has ongoing contacts with churches and other organizations who want quantities of masks to distribute among their memberships.