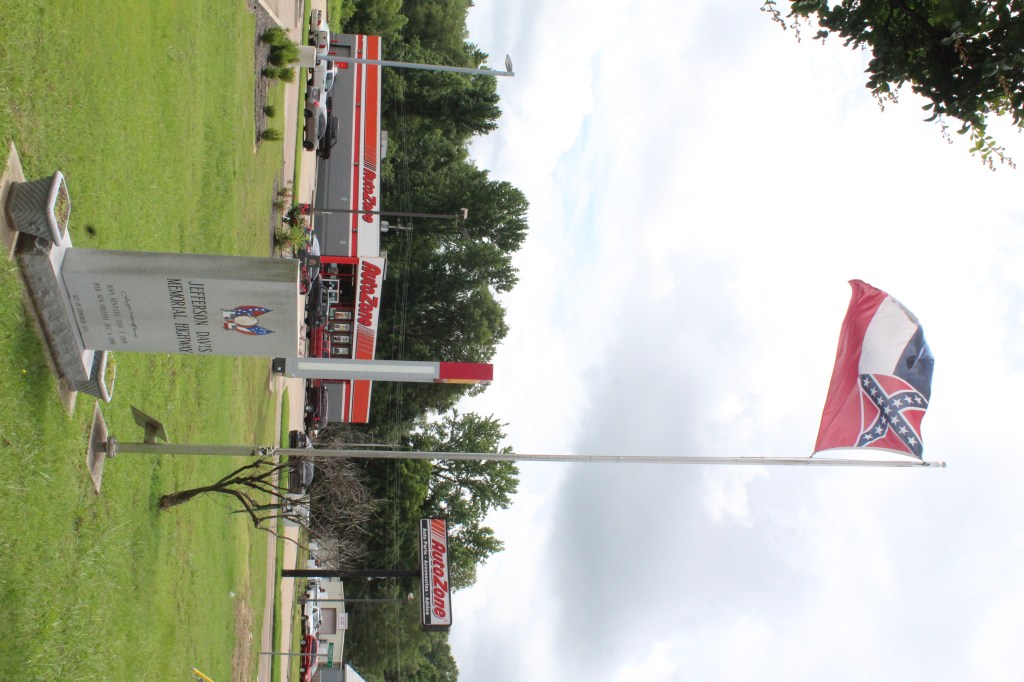 The Mississippi state flag will be replaced with a new flag without the Confederate Stars and Bars following Sunday votes in the Legislature. The flag was lowered at the state Capitol Building and other courthouses and municipal buildings across Mississippi. MDOT has not yet removed the one at the corner of Hwys. 6 & 51 in Batesville. The flagpole is part of the monument marking the Jefferson Davis Memorial Highway. (Glennie Pou)

The Mississippi state flag was taken down at the Panola County courthouse in Batesville this week, and across Mississippi, including at the government buildings in Jackson, following the Legislature’s vote to remove the Stars and Bars portion of the symbol and have a new design chosen in the fall.

Protests of Confederate emblems and statues on public property was the beginning of the end of the flag, which had flown in Mississippi since 1894. The Legislature made special votes to suspend certain rules that allowed the body to meet Sunday, June 28, to officially vote 91-23 in the House and 37-14 in the Senate to abandon the current flag .

The bill also established a commission who will offer a new design, including the words “In God We Trust.”  Voters will have the opportunity to vote for a new design in the November General Election.

Although many have asked the Legislature to consider adopting a new flag for many years based on a poor perception of the state’s race relations and advancements in equality by companies who have shunned expansion opportunities in Mississippi because of the flag, lawmakers have resisted.

Requests for a change of flag to increase economic development was never enough to change the minds of senators and representatives in Jackson because many understood the will of Mississippi voters was clear when the last proposal for change was turned down by a statewide vote.

Elected officials were convinced this week, though, by the spotlight of national attention and the statements of the National Collegiate Athletics Association and the Southeastern Conference and other major sports sanctioning boards, that no tournaments or championship contests would be held in the state without the change.

Over time, the general attitude of Mississippi residents has also changed about the flag and its detriment to the state. While a great majority understand the flag’s place in the state’s history and heritage, they are also aware that hate groups from across the world have seized the Confederate battle flag for incorporation into their racists and anti-Semitic propaganda.

Many suggested that a popular vote for the flag would fail if placed on a ballot because an increasing number of Mississippians want to dismiss any symbols associated with hate groups in an effort to raise the state’s perception for potential economic advancements.

From Sen. Nicole Akins Boyd (Dist. 9): “Sunday we turned a page in Mississippi’s history. It was a day for all of us to move forward, toward our very best future.”

“For Panola County and our state this changes the welcome mat for recruiting and retaining industry in our region. I can’t wait to see the commission’s new flag design with our motto In God We Trust unifying us all under one banner. I look forward to our citizens voting on the new flag in November.

From Sen. Robert Jackson (Dist. 11): “The vote to change the state flag was probably the most important vote I’ve cast in all of my 16 and a half years in the Senate. I’m looking forward and not looking back as Mississippi has joined the rest of the U.S.”

From Rep. Brady Williamson (Dist. 10): “I fought hard for you to have a voice on our current flag and finished it with a “no” vote to suspend the rules. We all were very aware suspending the rules would remove your ability to have a say and remove our current flag. The second vote was easy, being it would force a new flag that must include In God We Trust.”

“We should have a new design by mid-September and that one choice will be on November’s ballot.”

From Rep. Lataisha Jackson (Dist. 11): “In 2013 I ran in effort of continuing to Move District 11 Forward, it feels so amazing to be a part of such a historic vote to change our state flag and move Mississippi forward. Though this change doesn’t erase the dark history of the Confederacy for me nor my ancestors, it provides hope for a brighter and better Mississippi.”

Cutline: The Mississippi state flag will be replaced with a new flag without the Confederate Stars and Bars following Sunday votes in the Legislature. The flag was lowered at the state Capitol Building and other courthouses and municipal buildings across Mississippi. MDOT has not yet removed the one at the corner of Hwys. 6 & 51 in Batesville. The flagpole is part of the monument marking the Jefferson Davis Memorial Highway. (Glennie Pou)