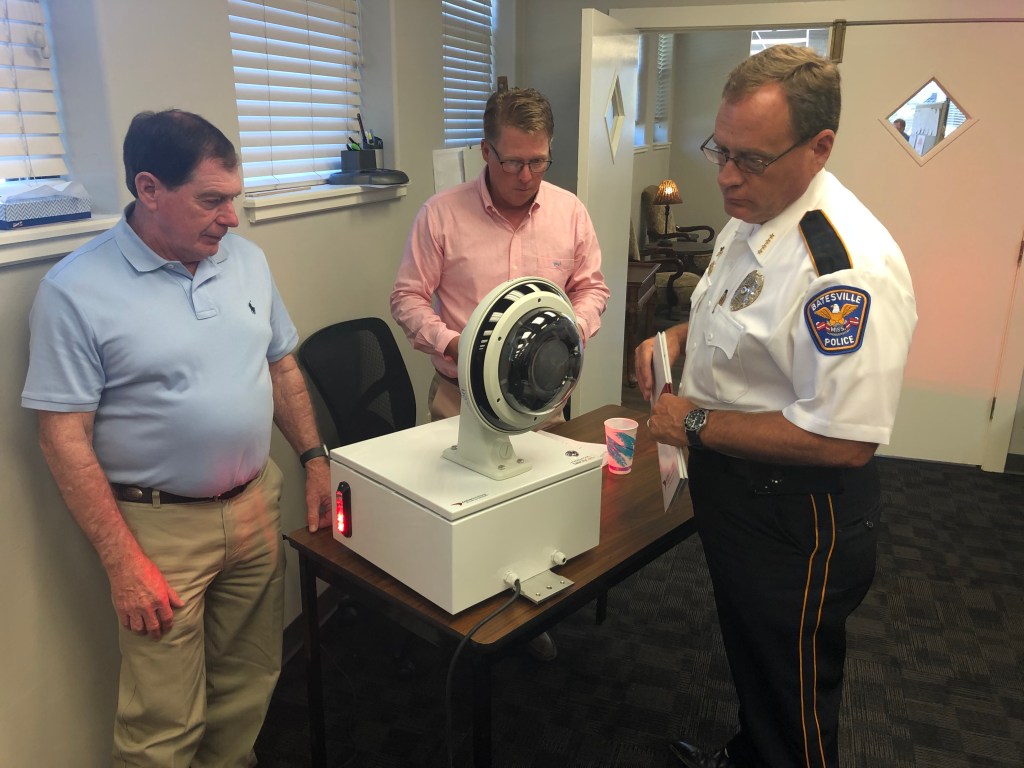 Batesville aldermen Dennis Land (left) and Teddy Morrow look over a part of the surveillance system proposed for the city by Chief Jimmy McCloud. The board was impressed with the company’s products and level of ongoing support for clients. (Jeremy Weldon)

The Batesville Police Department has asked the Mayor and Board of Aldermen for a new surveillance system they believe will further their ability to keep Batesville residents safe.

The police department and other city officials researched different surveillance systems, but decided that the Active Solutions surveillance system would be the best for the city when part of the camera system was demonstrated at a recent board meeting.

Aldermen were given a hands-on demonstration of part of the system and heard a presentation about the various ways cameras and internet options can aid in crime prevention in the city. The price tag is steep –  $575,757.60 for the whole package – but worth the investment considering the savings generated by a drop in property and personal crime, police officials said.

“The Active Solutions system was different from other surveillance systems we researched because of the difference in the quality of the system, how quick the response time was from the camera to the server, and the company’s service and reputation,” said Chief of Police Jimmy McCloud.

The main goals for the surveillance system are to protect residents, help solve crimes faster and, most importantly, deter crime from happening in the community, he said.

“This system is for our residents in helping to protect them.  We want to assure the public that it is not big brother watching you, but us trying to keep our residents safe. We already have a great community, but we believe the system will help make our community even better,” McCloud said.

Police plan to install cameras at intersections, places of high traffic, parks and entrances to neighborhoods. Aldermen were supportive of the system, agreeing that better tools for crime control benefits everyone although there was visible sticker shock at the pricing.

“The system is like LEGOS. Right now, we are looking at a base set, but as Batesville grows or the system is needed in a different location, we can add on to the system,” said McCloud.

“For example, if there was a string of car burglaries in a neighborhood, we could monitor the neighborhood’s entrance to see if there was any suspicious activity going on and help us determine a possible suspect. We can also use the system through 911. If you call 911 about an accident, we can look at the nearest camera and determine what happened, and if there is a suspect, we can determine where they are going,” said McCloud.

Aldermen took all the information presented under advisement and are expected to decide whether to purchase the system as quoted, including about 30 cameras, or ask the police department to get a smaller package this year and add to the system with future budgets.

Board attorney Colmon Mitchell questioned why aldermen had just one quote for a surveillance system, noting that multiple companies manufacture and support systems for other businesses and municipalities. McCloud said he had studied several available systems, but only asked for a quote from Active Solutions when he determined the company had the best product and support for Batesville.

McCloud was given a tour of the same system shown to the Batesville board in New Orleans several months ago. The chief said he was so impressed with the capabilities of the network he decided the company’s service would improve overall city protection more efficiently than others.

McCloud said because systems are expensive and time-consuming to install, once a department chooses a particular company, all subsequent add ons and upgrades must come from the original company to ensure interfaced capabilities are not compromised.

Active Solutions LLC is based out of Baton Rouge, La., and is the same camera system used for the New Orleans Police Department and the City of Starkville, among other Southeastern cities and towns, schools, and private businesses.