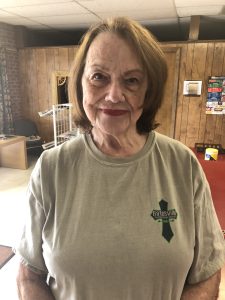 Sunday, the 9th of June, was a beautiful sunny day. We heard the sound of the marchers across the way near our home. We were relieved that it was a peaceful march in our city.

According to the newspaper there were 125 people – men, women, young people, and even children – all marching in an orderly manner. Dr. Martin Luther King believed and taught this way of peaceful protest.

He would have been proud of our marchers who were not only concerned about our country, but also about common concerts that still trouble them. They were also marching to show unity between the citizens and our local law enforcement officers.

Police Chief McCloud and Sheriff Phelps helped lead the march. Our city is blessed to have these two men as leaders. Prayer needs to be said each day for safety, wisdom, and good judgement for the very necessary policemen and deputies.

The march began with prayer. Thanks to the organizers and to all who participated in this way. My heart has been troubled and moved by all the racial unrest, all the hate and division that we see in our country.

I have never seen anything like this in my beloved America. What is the answer?

As my black friend recently expressed to me, “The government is not the answer. More money is  not the answer. These have failed. The answer is for all to get down on our knees and seek God. He has the answer.”

I believe she is totally right. God can make a way where there seems to be no way. Believe it.

II Chronicles 7:14 is a very familiar verse to most church going people. God lays it out to individuals and our nation as to how we will have a healed land.

“If my people who are called by my name will humble themselves and pray and seek my face, and turn from their wicked ways, then will I hear from heaven, and will forgive their sin and heal their land.”  This is speaking to believers in Christ as Savior and Lord.

If one has been reared in the South it is pretty sure that prejudice toward some citizens has reared its ugly head all throughout their life. Many have been reared in an atmosphere of thinking that they might just be better than others. This is sin.

God has dealt with me for years and although I have weeded much prejudice from my heart, I have to be alert and dig deep. Only God can change a heart. Satan, our enemy is out to get our mind. We must guard what we think.

I heard a young, black Christian singer last week speaking about racism. He said his parents never taught him to hate, and he is glad. There are probably some blacks who have hate, bitterness, and hurt toward white people due to their history of persecution, and being treated unequally.

It could be that as a child someone made fun of their color. What God thinks is the only truth. The Bible is the truth. He loves all people equally. He made people with different colored skins because he loves color – yellow, red, black, and white, all are precious in his sight.

There is a resurgence in the persecution of Jews in this country and around the world. Even though they gave us Jesus, there has always been hatred toward them.

Christians are under persecution in much of the world. Especially in the Middle East, Nigeria and other African countries, North Korea, China, and in many other places. If found to be a Christian, people are beaten, jailed, and killed. Some are expelled from their towns and villages. This happens even today.

Black on black crime is a major problem all over the United States. Prayer is needed. God moves when his children pray.

A smiles, a small gift, a conversation, a visit, a phone call. These will help us each be a blessing.

“This song is on my mind as I write:

Softly and tenderly Jesus is calling.

He is calling you, my white friends.

He is calling you, my black friends.

He is calling you, my Hispanic friends.”

He is calling us to love each other. This is God’s will. Believe it, surrender to God’s will. This will change your life. This is true for all because he desires people of every color to love Him, and he loves everyone the same.

To end on another note, it’s good news that Mr. Burl Cain has been appointed by our Governor to be the head of the Mississippi Department of Corrections.

There could not be better news for our sad prison system. Mr. Cain turned the bloodiest prison in the U.S., Angola Prison in Louisiana, into a model institution. It has been noted in T.V. documentaries, magazine articles and newspaper stories how he did this and how the lives of prisoners changed for the good.

Parents of prisoners, take heart, there is much hope.

Keep praying for the racial tension in our town, state, and the world. Love conquers all, friends.