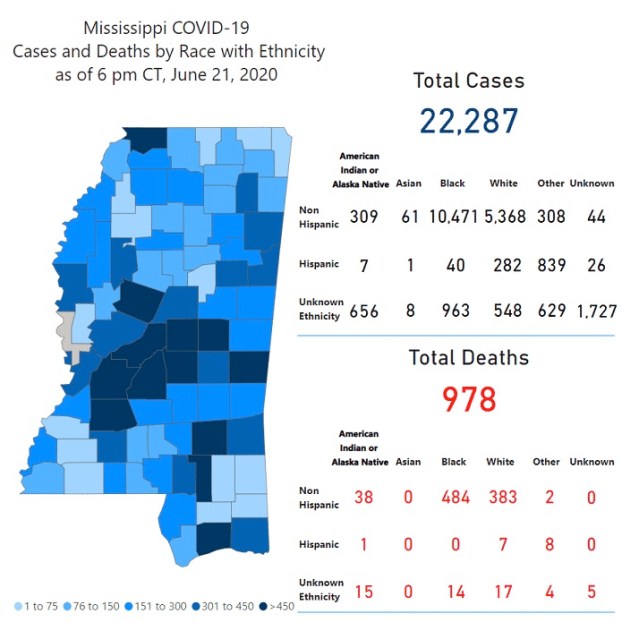 The Mississippi State Department of Health has released updated numbers from the agency’s data collection effort of coronavirus infections across Mississippi, broken down by county.

Due to computer software problems, MSDH has not been able to provide updates since June 17. Today the state updated their reported numbers with cumulative figures, including the five days where no new data was given.

It was reported on June 16 (numbers through June 15) that Panola County cases of COVID-19 had been 146 with four deaths since the numbers were first kept on a daily basis in March.

Through June 21 at 6 p.m., Panola County now has 179 reported infections, with five resulting in fatalities. The 33 new infections in five days mean that citizens of Batesville and the surrounding towns that make up the county’s population have about 60 active cases of the coronavirus infection, assuming that people diagnosed more than two weeks ago have recovered from their illness.

In surrounding counties, Tate is reporting a total of 182 cases with two deaths, Quitman has recorded 49 cases and no deaths, Tallahatchie has had 64 cases and one death, Yalobusha has had 132 cases with seven deaths (all at the Water Valley nursing home), and Lafayette has seen 254 cases with four deaths (one in a long term care facility).

Listed below is a breakdown of positive cases with deaths for each county, and the number of infections in long term care facilities and those fatalities.

About 22,287 Mississippians have contracted the deadly virus and 978 have died from its complications, the state said Monday afternoon. Some 17,242 have recovered, according to state health officials.

Panola County Miss Hospitality Andrea Berryhill of Batesville is a Top 10 finalist and will compete in Hattiesburg next month... read more