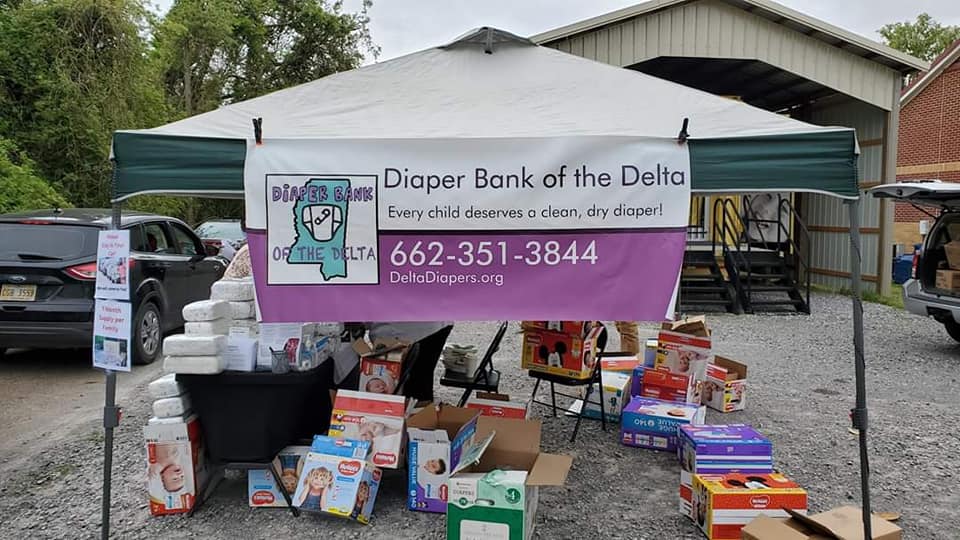 Even in normal times, access to fresh diapers can be a game-changer in a dire situation.  So as the economy continues to tumble, mainly due to repercussions from the coronavirus pandemic, it’s no wonder babies too are landing bare on their butts.

The nonprofit organization, Diaper Bank of the Delta (DBD), based in Clarksdale,  has been a partners with the Sav-A-Life pregnancy resource center in Batesville since 2017, providing them with diapers that parents can pick up on a monthly basis, according to Diaper Bank Co-Founder and Executive Director, Chelesa Presley.

DBD, intent on helping to improve maternal-child health, will be spending even more time in Panola County on Tuesday, May 26, with a stop in Sardis to distribute diapers, baby wipes and feminine hygiene supplies from 10 a.m.- noon at old Fred’s parking lot.

Later this afternoon, distribution and receiving of donations will be continuing in Como, at the lot across the street from First Security Bank, from 2 p.m.-4 p.m.

The parent seeking assistance will be asked to provide the name of their child, birthdate, address and telephone number – although the child does not have to be present.

The only nationally recognized diaper bank in the state of Mississippi were in Robinsonville on Thursday morning, and Tunica later on in the afternoon distributing items.  Distribution drives occur on Tuesdays and Thursdays.

“We opened our doors to the public in February of 2016, under our 501(c)(3) name, Coahoma County Diaper Bank, and then in 2019, because we began to expand outside out borders, we changed our name to the Diaper Bank of the Delta,” explained Presley of the name evolution.

Now, DBD, a member of the National Diaper Bank Network, considers itself the “center hub in the Mississippi Delta for advocacy, support, resources, and compassion for families with young children,” according to its Facebook page.

“So we do take donations and everything…about 90-95% will go right back into the community,” said Presley.  “Because we are a national diaper bank we are able to purchase our diapers at a reduced rate, because the National Diaper Bank Network has a partnership with Huggies,” she explained.  “Most of our diapers and our wipes are Huggies.  Because there’s a partnership through the national organization…Kimberly-Clark (Huggies), they are a founding sponsor of the Diaper Bank.  At a reduced rate, they provide us with diapers, wipes and feminine hygiene products.”

“We’re a small organization,” Presley modestly admitted of DBD.  “There’s really just 2 of us that do this everyday,” she said.  “Yes…real grass roots.”

Following the pair of North Panola County Free Diaper Distribution Drive-Thru events, Presley and company will move on to Crowder and Charleston, on Thursday, May 28.

Panola cases of COVID-19 up sharply in last week;…