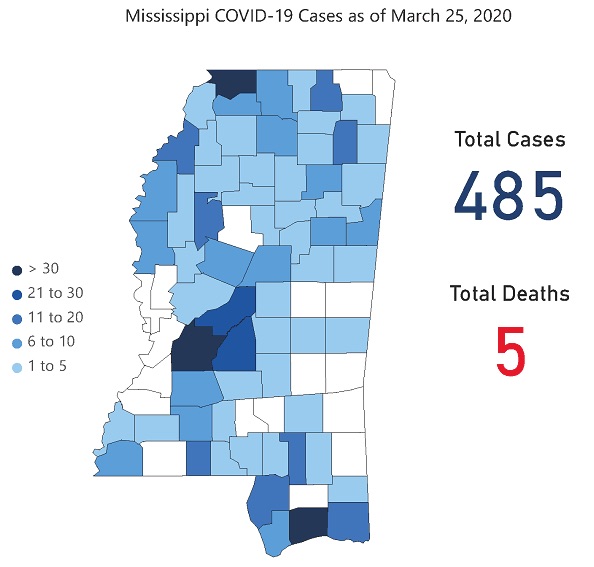 In their conference call meeting at 10 a.m. Thursday, the Batesville Mayor and Board of Aldermen got updated numbers released by the Mississippi State Department of Health, and heard a report from Police Chief Jimmy McCloud.

There are now four confirmed cases of Covid-19 caused by the coronavirus in Panola County. As of Wednesday night Panola Medical Center has tested 39 patients for the virus and have received 12 negative results.

“We fully expect these numbers to rise the next couple of days,” McCloud said.

The hospital is still waiting on more than 25 tests performed in the last week. Many of those tests have been at the testing labs four or five days and national average is about six days for tests to be returned to the the respective facilities.

DeSoto County is the top confirmed count in the state with 49 confirmed. Statewide there are now 485 cases (as of Wednesday night) up from 377 cases on Tuesday night.

Benton, Lauderdale, Quitman and Yalobusha counties all reported their first positive cases in the past 24 hours.

McCloud said his department had a couple of calls yesterday about businesses not complying with the city’s ordinance passed in response to the coronavirus outbreak, but officers have paid visits to the stores and explained what was expected.

“We have been checking throughout the city and will continue to do so,” he said.

The Police Department is fully-functionally with no officers ill at this time, the chief said.

Mayor Jerry Autrey said he is also pleased to see that grocery shopping has returned to its normal level, if not slightly below average, but noted that stores might experience the same crowding issues next Tuesday and Wednesday, the last day of the month and the first day of April, when many Panola County residents will receive their usual Social Security, disability, and other transfer payments from the federal government.

Autrey said he expects to see crowds swell again during that time, despite the dire warnings from state and national that unless physical contact is severely restricted – no more than 10 people in an room together and at least six feet between everyone at all times – the coronavirus will spread unchecked, greatly increasing the possibility of Batesville and Panola County have a larger percentage of its population contracting advanced cases of Covid-19, resulting in a high rate of local deaths.

“When that happens we really need to be on top of it,” Autrey said. “Some of these grocery stores are going to have to step up, or we will have to step up.”

Alderman Teddy Morrow said he believes some of the problems that caused packed parking lots and full stores last week, even while infection rates were soaring across the nation, have been resolved by new policies the grocery stores have adopted on their own.

Stores are now limiting amounts that may be purchased on “hot items” such as milk, break, eggs, and meat, and aldermen agreed those limits will help move people in and out of stores quicker, and help citizens understand that hoarding of food doesn’t help the overall population and puts stocking burdens on each store.

“Right now trucks are running and grocery stores are getting more in, but we know they will get hard next week,” Autrey said.

McCloud told board members he will continue to work closely with the stores in anticipation of another big run on groceries in Batesville, but hopes that citizens are now calmer, and realize they need for staying away from crowds.

There were also reports that some churches in Batesville continue to gather for services, including traditional Bible study Wednesday night. Until groups and churches stop their meetings, officials and healthcare workers warn, the spread of the coronavirus will not be stopped in time to prevent a massive wave of infected and sick people in the next two weeks that will overwhelm the capabilities of local hospitals, doctors, and nurses.

The Mayor and Board of Aldermen will meet again by telephone conference Friday  at 10 a.m.