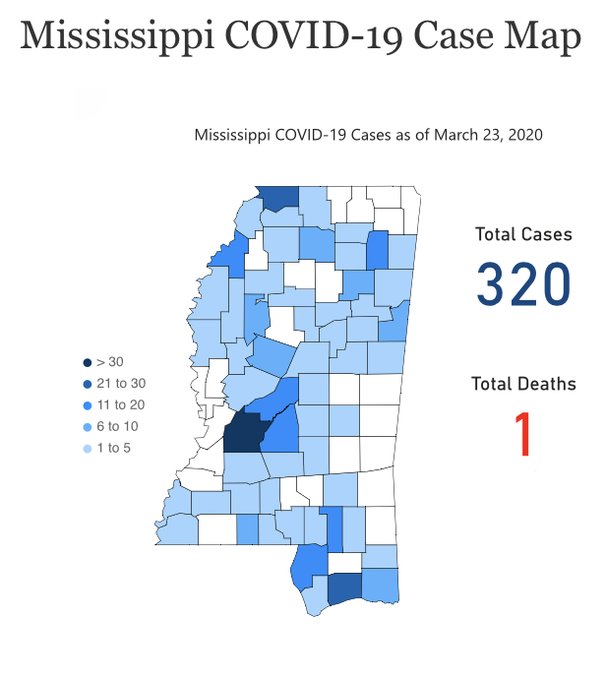 The Mississippi Dept. of Health has 71 new COVID-19 cases since yesterday. In Mississippi there are now 320 total cases, a 29 percent increase from yesterday, with first cases in Choctaw, Newton and Noxubee counties.

The state total now stands at 320, with one death. More details of Mississippi cases, along with preventive steps to take against COVID-19, are online at http://HealthyMS.com/covid-19

In the United States there are now 46,168 cases, a 22 increase over the past day. There were no new cases reported in Panola County. The Batesville hospital continues to swab and collect specimen samples from a few patients a day, but has not received any more positive results other than the two already reported.

At a 10 a.m. meeting of the Batesville Mayor and Board of Aldermen, officials adopted an ordinance that attaches penalties to any business owner who breaks the city’s order limiting public access to some restaurants and some businesses in an effort to slow the spread of coronavirus.

The penalty is a fine of up to $1,000 and/or up to 90 days in jail for each offense. Each day the order is violated is a new offense, according to the mayor. The board took no further action to limit public movement around the city. As of Tuesday, the only restrictions on businesses  inside the city limits are on restaurants and convenience stores which serve prepared foods, and a 10-person limit on groups and organizations for meetings, including churches.

The Board of Supervisors, on Monday, reiterated their position on the coronavirus containment effort, mandating a Stay at Home policy for all citizens who live in the county and not inside the incorporated limits of Batesville, Sardis, Como, Pope, and the parts of Crenshaw and Crowder that lie within Panola’s boundaries.

The Stay at Home order closes all non-essential businesses, including restaurants, to traffic and puts limits on how many people may be in retail stores and offices at one time. Gatherings for meetings, including church, is not allowed in the county for 15 days.

The City of Batesville has been unwilling to make that move, and most of the board members believe that the rate of infection in the state has not yet reached the level that would require any more public restrictions. In an email to The Panolian Tuesday morning, alderman and Vice-Mayor Teddy Morrow said he believes the city board should move a step further and ask non-essential business to shut down temporarily.

Morrow has shut his downtown clothing boutique, Stubbs, and will not reopen until conditions improve, he said. Mayor Jerry Autrey said Monday the city will continue to monitor the situation closely and follow the recommendations from the Miss. Dept. of Health and the national CDC.

Autrey noted that Gov. Tate Reeves has steadfastly said he will not call for a Stay at Home order to cover all of Mississippi at this point, and that the state’s municipalities are free to take those measures individually should local leaders feel it necessary.

Autrey asked Batesville Police Chief Jimmy McCloud to give an update on activities in the city’s businesses because he has been constantly monitoring crowd sizes and public movement, especially in the city’s larger grocery outlets, since the outbreak became a local threat last week.

“In the last 24 hours our call volume in the city at the police department has been very low and the town has gotten really quiet and the traffic count is really low,” McCloud said. “The restaurants seem to be complying with the orders and the grocery store numbers have gone way down. I’ve been in contact with store managers and owners and they are putting more and more restrictions on the amounts of purchases and they are starting to get some trucks in now.”

“Everything is flowing really, really well now,” McCloud said “Everybody we talk to is predicting that we will see a steady increase until the testing gets caught up  but that’s been fully predicted.” No police officers are reporting illnesses, and the department is fully functional, he said.

“It’s very clear the state in what the Governor is putting out  has no intention of doing a shutdown statewide. They’re pretty much leaving all that decision to the local authorities. The Governor told one caller (in a press conference) that if you feel like you need to lock yourself down, then lock yourself down. If you need to stay home, then stay home. So that’s kind of where we are right now,” McCloud said.

Each morning, McCloud is now convening a meeting with Sheriff Shane Phelps, Batesville Public Works Director David Karr, Panola Emergency Operations Director Daniel Cole, and others to discuss any changes in conditions during the past 24 hours, and any new plans for dealing with the ongoing health crisis.