County says Stay at Home, city leaders say not necessary at this time 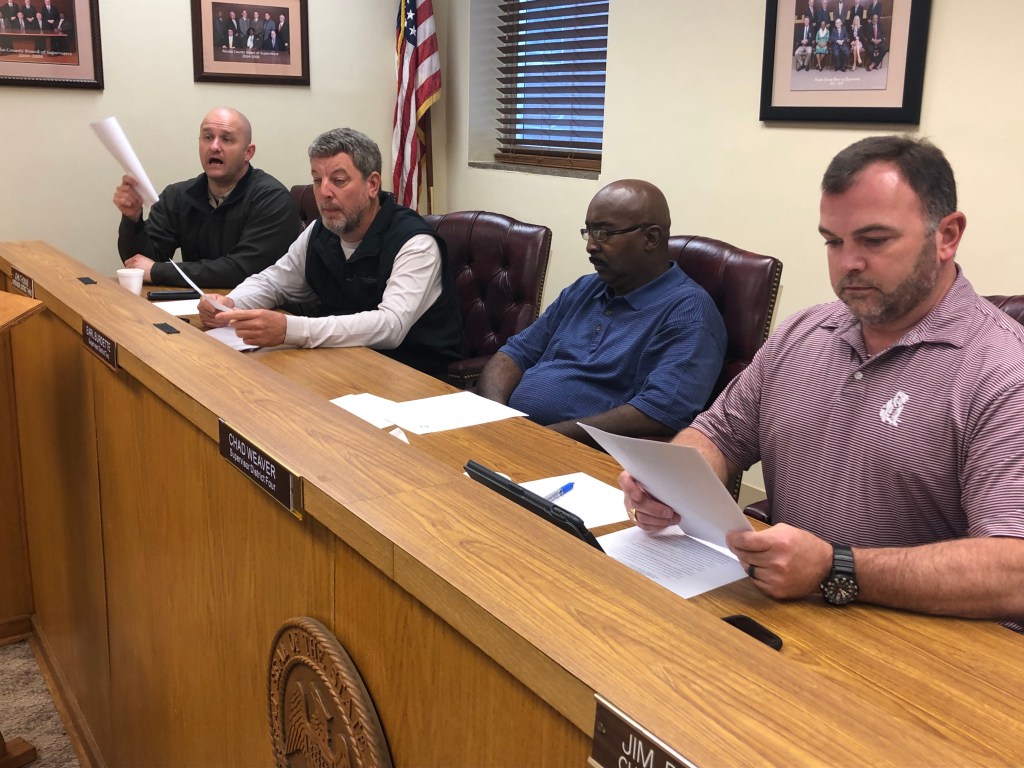 Depending on where a person lives, citizens in Panola County are either under a Stay at Home order adopted in the form of a resolution Monday morning by the Board of Supervisors, or free to come and go as they normally would except for in restaurants and in gatherings, such as clubs or church meetings.

As of 3 p.m. today (Monday, March 23), all other stores inside the City of Batesville, and those in the Towns of Como, Pope, Sardis, Courtland, and Crenshaw, are allowed to remain open. Batesville aldermen met at 9 a.m. at City Hall (some by telephone conference) to consider further action, but chose to wait before taking another step and adopt either a Stay at Home or a more stringent Shelter at Home resolution.

Meanwhile, the Board of Supervisors were also meeting at 9 a.m., about a block away at the Courthouse, and adopting a resolution very similar to the one approved by leaders of Oxford Sunday night. The Stay at Home resolution for the county will go into effect at 12:01 a.m. Tuesday and orders that all non-essential businesses be closed and that many citizens are to stay home for the next 15 days.

A question-and-answer document produced by the City of Oxford and used by the Panola County supervisors says the following:

“Vulnerable populations including the elderly and those with underlying health conditions must stay at home. All community members should stay at home except to perform essential duties for business continuity or government functions, to get food, care for a relative or friend, get necessary health care, or perform activities related to maintaining a healthy lifestyle during this time.”

Supervisors started their day with an 8:30 a.m. conference call with officials from the city hosted by Panola Medical Center. In that call, hospital officials asked the county adopt the Stay at Home measure, saying that the threat of lots of infections at one time is the greatest fear of the medical community, simply because it will overwhelm the only health care facility in Panola County that is set up to manage Covid-19 cases.

“It’s the key reason to put a Stay at Home order in place,” Dr. Parnell told the supervisors. “The spread of the virus in a quick fashion is what you don’t want that to happen.”

The Board of Supervisors, in a special meeting held by telephone Saturday, issued a board mandate they believed would severely limit the access of the public into local businesses, especially the larger grocery outlets of Piggly Wiggly, Kroger, Sav-A-Lot, Dollar General, and Wal Mart. Before the meeting, board president Cole Flint had contacted the mayors of Batesville and other towns, and thought he had their support for what would have essentially been a Shelter in Place order similar to the ones now in place in several states across the nation.

Later in the afternoon Saturday, the board of aldermen of Batesville met, and did not adopt a resolution that matched the mandate of the supervisors. Instead, they said restaurants should abide by a take-out only policy and social gatherings of more than 10 people were not allowed. Despite that resolution, some churches in Batesville met as normal Sunday with crowds of nearly 100 reported at some.

Flint said he only asked his board for the stricter resolution and to limit the number of persons allowed in retail stores, including grocery stores, because he thought the mayors he had spoken with wanted the county to take the lead on the official orders, and he believed each would present the same measure to their boards as well.

At the supervisors’ Monday meeting, Board Attorney Gaines Baker commended the supervisors for their action on Saturday, assuring them they had all the legal authority needed to make the restrictions in the unincorporated parts of Panola County.

“I applaud you for what the board did Saturday, and I’m sorry if certain civic leaders got their feelings hurt, they should have been taking the same initiative as you did,” Baker said. “I applaud you for that and personally I  think you need to go a step further and shut down all non essential businesses.”

District Four Supervisor Chad Weaver agreed, saying the board did the right thing, but was wrong to meet only by telephone.

“I don’t disagree with it, I think what took place Saturday had great intentions, but I do not think we need to take that approach of tending to business again because of the outcome. I also think that our city leaders cowered down after there were repercussions from local business owners and I feel like we need to have limits at the larger stores.  I don’t recall anybody ever saying to let 10 people only in Piggly Wiggly,” Weaver said.

District Three Supervisor John Thomas also said supervisors should have met in person if possible while agreeing with Weaver. “Piggly Wiggly with more than 150 people inside at this time is a disaster,” he said.

Supervisors Earl Burdette and James Birge (by phone) agreed with the advice they were given by the hospital officials and their board attorney about doing all things possible to limit the public’s physical contact with those outside their family and household members.

The supervisors unanimously adopted the Stay at Home policy, voicing hope that leaders in Batesville, Sardis, and Crenshaw would follow suit. Until then, the people of Panola are left in limbo on many aspects of daily life and there are currently different rules for different businesses in the county.

For example, as the adopted resolutions now stand, the Dollar General Store in Batesville may have as many people inside as the fire code allows. The Dollar General on Hentz Road at the Pope/Courtland exit may only have 10 at a time, any more than that would put the store manager in jeopardy of a fine and possible arrest. The Dollar General in Crenshaw will only allow 10 at a time, but that was worked out personally between the chain’s national office and Crenshaw Mayor Oscar Barlow.

Until the city and county boards of all the entities that make up Panola County have one uniform set of rules under which the citizens are supposed to live, it is likely there will be nothing spreading faster than coronavirus than more unanswered questions.

In no other county of the 82 in Mississippi has a similar resolution been passed that is actually stronger than the ones in place for municipalities in each county. In most counties where leaders feel it necessary to adopt restrictions for citizens and businesses, it is the city boards who have made the first moves.

For their part, the Batesville Mayor and Aldermen said they are monitoring the size of crowds at the grocery stores and they are steadily decreasing and returning to normal. Also, they said stiffer resolutions may follow, but at this time they feel it’s not necessary to restrict travel and business any more than what their Saturday resolution provides for.

Gaines Baker summed up the feelings of the board of supervisors, apparently, when he told the board he believes politics are clouding the views of some officials.

“They better understand this, if they yield to businesses and worry about the decrease in business what they are going to do is increase one business for sure, and that’s the business of the undertaker,” Baker said.

Here is the link for the FAQ taken from the City of Oxford resolution and adopted for the citizens and areas in Panola County, but outside the incorporated cities and towns.