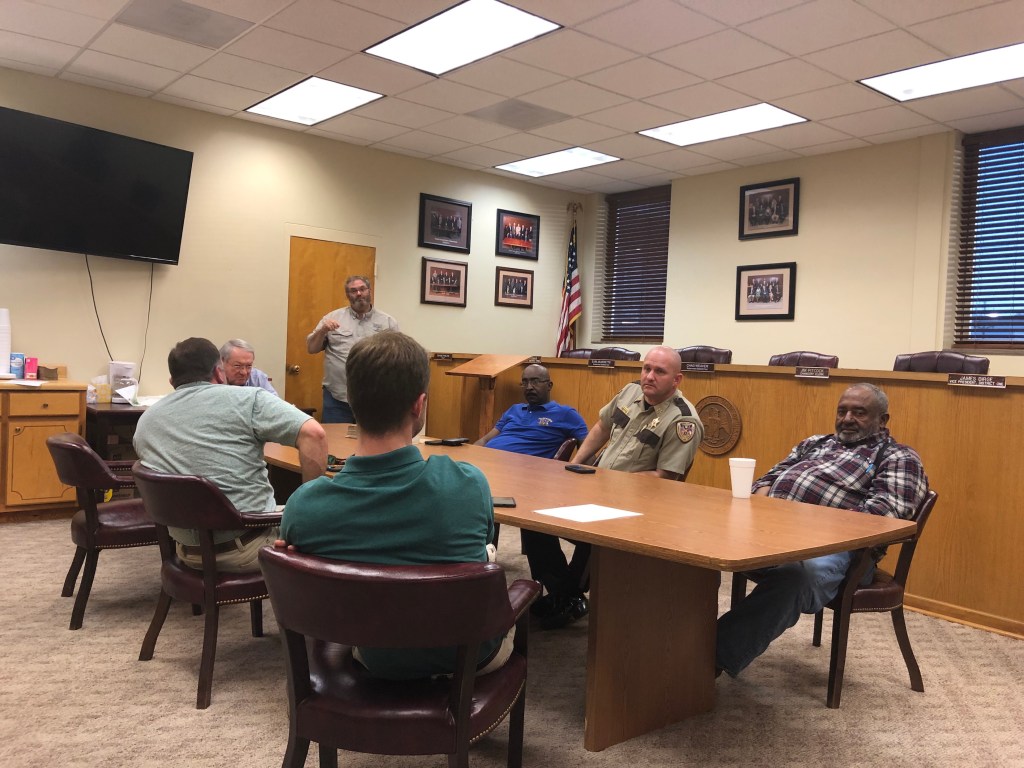 At least five Panola County residents have been tested for Coronavirus and are awaiting results, according to Emergency Operations Director Daniel Cole.

In a special called meeting of the Board of Supervisors at 6 p.m. Tuesday at the Batesville Courthouse, Cole advised other county officials of his office’s preparedness for the coming surge of infections and hospitalizations.

Cole said interaction with officials from the Mississippi Department of Health this week give him reason to believe the state will soon set up an outdoor testing pod that will allow citizens to drive through a tent-like system and have a nasal swab performed for testing.

Cole said the state would set up the testing pod in the parking lot of the Batesville Civic Center and be able to serve many people per day if all goes as planned. The state is also considering testing pods in DeSoto and one other North Mississippi county.

For now, Cole advised that anyone with symptoms go immediately to their local doctor’s office, or to a clinic, for an initial screening. If medical personnel there have reason to believe a test for Coronavirus is needed, they will direct patients to Panola Medical Center for the swab.

“We are asking that when people are told by their local doctor to get tested that they call the hospital first,” Cole said. “They will be waiting in the parking lot of the emergency room and will take the person into a sealed off area for testing.”

“At that time they will undergo further screening and decide whether they are well enough to go home or what the best course of action is based on the individual patient,” he said. “It is my understanding that the people who have been tested so far have gone home to wait on the results.”

Cole said he has met extensively with Panola Medical Center officials and they have demonstrated the emergency response system the hospital has put into place.

“They have a great plan at Panola Medical Center and I believe they will be ready for whatever comes the next few days,” Cole said.

The state is regularly updating media outlets about cases confirmed in each county of Mississippi. Cole said he expects when a case is first officially diagnosed here his office will be informed quickly.

“We’ve asked to be given a heads up to let us know when that first test comes back positive so we can notify elected officials that they are about to get a lot of phone calls and so we can notify the local hospital because when we start getting positive cases there will probably be a rush for people wanting to be tested.”

Besides hearing from Cole, the supervisors talked for almost an hour about what precautions to take at the courthouses and how to handle the pool of employees that work for Panola County. Some supervisors wanted to give every employee the option of taking the next three days off with pay until there is a better understanding of what executive actions are taken at the state and federal levels to address the crisis situation.

Other board members were in favor of allowing just high risk employees – those over 60 years of age, women who are expecting, and those with compromised immune systems related to other illnesses – take leaves of absences with pay.

Finally, the supervisors decided to take no official action until there are further developments at higher levels. Beginning Tuesday, just one door was kept open at the Batesville Courthouse and a posted deputy allowed just one visitor per office to enter at a time.

Sheriff Shane Phelps, by law the person responsible for the safety of the courthouses, said that policy will remain in place and he will also require the posted deputy to give each person entering the building hand sanitizer to use before coming through the door.