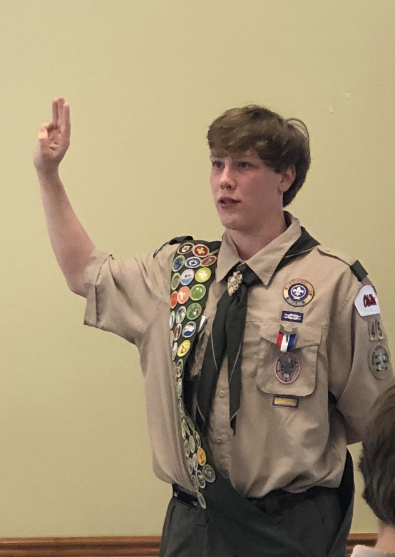 Carson Cook was awarded his Eagle rank in a Feb. 9 ceremony held at St Mary’s Catholic Church where he is a member. The 17- year-old Batesville native is the son of Karen Summerville and Richard W. Cook.

He is a Junior at South Panola High School. He plays soccer and is on the tennis team.

Cook was a Cub and Webelos Scout with pack 78 in Batesville, and a Boy Scout with Troop 45 in Oxford.

He has been involved with scouting since he was five years old earning the Arrow of Light as a Cub Scout. He was required to earn 21 merit badges with 11 being mandatory badges for Eagle. He has earned a total of 45 merit badges.

He has logged over 100 plus nights sleeping in a tent or under the stars. One wilderness survival camp the high temperature for the weekend was only 9F sleeping in make shift survival shelters.

Cook served his troop as Patrol Leader and was elected Senior Patrol Leader.  He served on staff at BSA Camp Yocona for three years, located at Randolph.