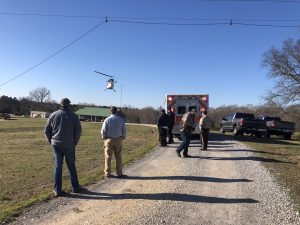 A man believed to be an employee of a company contracted with TVIFiber to hang the fiber optic cable in Panola County was seriously injured Thursday morning when he apparently touched a high voltage power line on Bethlehem Road, between Hwy. 6/278 and Brewer Rd.

The Batesville Fire Department was notified at 8:02 of the accident and city firetrucks, along with Sheriff’s Department officers and members of the Emergency Management Operations department were on the scene shortly.

A LifeGuard ambulance and paramedics were on the scene in less than 10 minutes. They transported the injured worker from the side of Bethlehem Rd. about 300 yards to the nearest property with a driveway at 4508 Bethlehem.

EMO employees had marked off a landing zone for the AirEvac medical helicopter, which landed at the property about 8:30 a.m. The helicopter lifted off, bound for a trauma hospital in Memphis, about 10 minutes later.

Tallahatchie Valley Electric Power Association became the first electric cooperative in the state to pursue the ambitious plan of providing high speed internet service to all of its customers in the seven counties it provides electric power. TVEPA serves most, or parts of, Panola, Grenada, Tallahatchie, Tate, Yalobusha, Quitman, and Lafayette Counties. 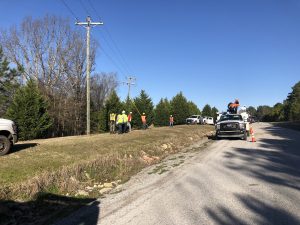 TVEPA formed TVIFiber last year after the Mississippi Legislature gave approval for co-ops to enter the high speed internet business and announced plans to have fiber optic lines strung on all of its 4,400 miles of transmission lines necessary to reach the more than 27,000 business and residential members of the cooperative.

Private companies were contracted by TVIFiber to supply and install the fiber optic lines. It is believed the injured man, reported to be 24 years old, is an employee of SDT  Telcom Services.

Southern Diversified Tech is a multi-disciplined telecommunications infrastructure services company based in Brookhaven, according to its website.

Workers have strung most of Panola County with the high speed lines, and are able to perform the job without having to disrupt regular TVEPA electric service, or require TVEPA lineman to be on site. The fiber optic lines are strung several feet before the high voltage power lines that can be deadly if touched without proper protection and grounding equipment.

Additional details about the accident, and the condition of the worker will be updated as available.

Inaugural inductees will be honored at banquet March 28 Staff Report Ten athletes and coaches will be inducted into the... read more